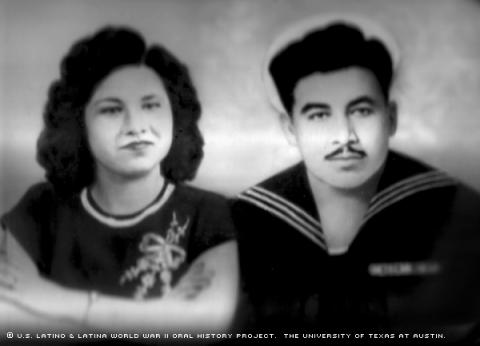 "Go to school, and not only that, pay attention!"

This is one bit of advice Ignacio and Antonia Guerrero passed on to their children and grandchildren. They insist on their family attending school, working hard and succeeding.

Mexican Americans didn’t always have the opportunity to be equally educated. In fact, this was the pre-World War II reality for most Latinos in the United States.

Growing up in Texas, they often suffered the injustices of prejudice and discrimination. Schools tended to be segregated: one for the Mexican Americans, another for the Anglo children. African Americans often had their own separate schools as well.

Many Mexican Americans never finished school in those days.

"I had to quit because I had to walk four miles; they didn't pick Mexicans up on the bus," Ignacio said. "Everybody else rode the bus except us."

"We lived on a farm and we had to walk four miles, rain or shine. There was a bus for the white kids and they would tease us as they drove by," she recalled. "We had only one teacher, who taught kindergarten through 12th grade. She would teach the 11th- and 12th-grade [students] first and then they would help with the younger kids."

Both Ignacio and Antonia dropped out of school, as the long walks to and from their classes became too much. Also, their help was needed at home. Both later received their high school degrees.

Ignacio joined the Navy in December of 1944, because everyone was enlisting from his hometown of Lockhart, Texas, and many were already serving in the war, he says. He joined seven men in his family -- cousins and uncles -- who served in other branches of the military, in everything from the infantry to medical units.

During the war, he put into port at Honolulu, Guam and Saipan.

In 1946, he was shipped to Houston, Texas, where he was discharged from the Navy as a seaman second class, and with a Bronze Star on his chest. Before serving in the Navy, he’d worked as a golf caddy at the local golf course. His passion for the sport began there and resumed after the war.

"There wasn't enough work for all of the people coming out of the service," Ignacio said. "So I started playing golf."

He says he played everyday because he wanted to learn the ins and outs of the sport, but conceded he wasn't good enough to make money from it.

He also started working at Goodwill Cleaners in Lockhart, Texas, and in 1948, met Antonia Medina. After they started dating, they attend dances and movies put on by the Mexican American community. Segregation and discrimination still existed after the war, but it had lessened.

"There was a change; people were a little better; they spoke to you, especially if you came in your uniform; they gave you a lot of respect," Ignacio recalled.

After he and Antonia got married August 6, 1949, they began a family, and eventually had three girls and two boys.

Ignacio was eventually successful at achieving this goal, which also earned him more pay than his previous job. He worked for General Motors for 35 years, 18 years as an electrician.

After raising the children, Antonia returned to school as well. Her school tried to convince her to only complete the GED program, but she insisted on finishing each grade level. She’d dropped out in her eighth-grade year, so she started there again and finished everything. She felt she’d been deprived of the opportunity to learn, and that by attending school grade by grade, she’d learn what she’d missed out on.

"I always say study hard, because I didn't get to go to school," said Antonia of the advice she gives to her youngsters.

Mr. and Mrs. Guerrero were interviewed in Saginaw, Michigan, on October 19, 2002, by Juan Martinez.