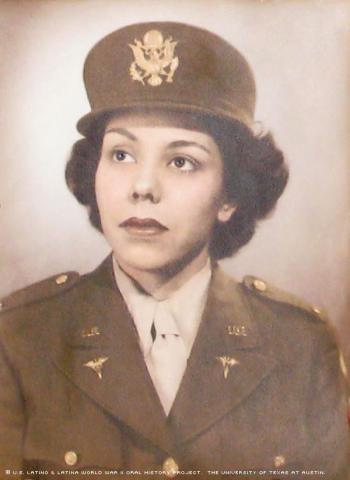 When Hortense Mota Gallardo recalls her childhood growing up in Depression-era San Antonio, Texas, she remembers the generosity of her father, Bartollo Mota, and how he not only provided for his own family, but for strangers in need of help.

“Daddy had a big heart,” Gallardo said. “We were supposed to share what we had – even if it was just a little bit.”

The compassion instilled in Gallardo by her father, an orphan who immigrated to San Antonio in the early 1900s, and her mother, a former elementary school teacher, would inspire her future career as a nurse in the Army during World War II.

Gallardo didn’t recall her family going without basic necessities during the Great Depression. Bartollo worked as the chief custodian at the Menger Hotel and the Medical Arts Building. His work ethic and attitude won him the admiration of employers, who’d frequently visit his home with their own families, bringing gifts of food and books for the children.

“We never did without because we were blessed,” Gallardo said.

Bartollo would share gifts given to him by his affluent employers with friends and strangers in need of a meal.

“Transients would come to the house and ask if they could do a job,” recalled Gallardo, who said her father would treat anyone who entered their home as a guest of honor. “Father would bring them to the house and seat them at the head of the table for dinner.”

Following dinner, the family would gather in the living room to read. Gallardo’s mother, Epifania Salazar Mota, would assist her children as they each read a chapter from a selected novel.

Guided by her family’s love and support, Gallardo excelled in school. After graduating from San Antonio’s Sidney Lanier High School in 1939, she decided to enter nursing school at the Robert B. Green Memorial Hospital. At the time, her father was trying to heal a dog bite on his leg, from which it took him about a year to recover. Gallardo’s family struggled with her father’s medical bills. When there wasn’t enough money for her tuition, her parents sold their jewelry and watches.

“Father was a gentle soul. So was mom. He said, ‘Your mom and I will be just fine,’” recalled Gallardo.

When she was in the middle of the three-year nursing program at Robert B. Green, the U.S. entered WWII. She joined the Army as a 2nd lieutenant, working at Brooke General Hospital, now Brooke Army Medical Center. A registered nurse, Gallardo worked alongside the Army doctors wrapping bandages and administering medication. The nurses were required to memorize the name, condition and requirements of every patient.

Gallardo’s first patients were either soldiers seriously injured overseas or those stationed at Lackland Air Force Base.

“I am a very religious person when it comes to my faith. I love everybody – I don’t think I ever met a person that I didn’t love,” she said. “That kind of helped me when I was nursing, because every one of my patients was very special to me.”

In April of 1942, 12,000 American soldiers and nearly 64,000 Filipino soldiers captured by the Japanese were forced to march more than 50 miles in deplorable conditions. More than 10,000 of the weakened prisoners of war perished in the Bataan Death March. When American survivors arrived at Brooke, Gallardo would see firsthand the torture experienced by them. The American POWs sent there even included nurses and General Jonathan Wainwright, according to Gallardo.

“They were very much abused. They were so thin,” she recalled.

Gallardo and her fellow nurses would work with paralyzed patients confined in full body casts.

“I will never forget one man,” she said.

He’d just arrived at the hospital and was being removed from his cast in preparation for surgery. The soldier begged Gallardo not to help, ashamed about the smell from his cast. As the cast was removed, maggots spilled out and the man began crying. She hugged her patient.

“I told him, ‘You and I can cry together,’” Gallardo recalled. “It could have been my brother.”

Her sense of responsibility was tested in 1943, when German prisoners of war began arriving at Brooke. According to The Library of Congress World War II Companion, they were among the nearly 50,000 POWs held in camps across Texas from 1943 to 1945. Those in need of medical attention were sent to Brooke, and into the care of Gallardo and the other medical staff.

“The POWs were just as scared of me as I was of them, but I was never alone,” Gallardo said: A well-armed sergeant nicknamed “Tiny” accompanied her as she cared for the Germans. She recalled Tiny as a “huge German who spoke different German dialects.”

Gallardo cared for 15 POWs at a time. The length of their stay depended upon the time necessary for adequate recuperation.

“They were very respectful,” she said. “They called me schwester, which is sister [in German]. And they called me ‘the proud one.’ I had to be stern because I was scared to death of them.”

Gallardo says she didn’t let her fear overcome her ability to perform her nursing duties; nor did she let judgment or hatred affect the quality of her treatment.

“They were all very happy when they realized we were not going to harm them, like they did our boys. We gave them the best of care,” she said. “It was something that I had to do … that was another human being.”

One German soldier gave Gallardo a bookmark with a drawing of an eagle, which she kept in her Bible for decades, until it finally disintegrated. Following the end of the war in 1945, Gallardo transferred to the station hospital at Laredo Flexible Gunnery School, where she was promoted to 1st Lieutenant. One year later, she returned to San Antonio, where she worked at Lackland until her discharge in 1947. Upon retirement, Gallardo left her residence in the barracks and returned to her parents’ home. Her service earned her respect and admiration within her neighborhood and community.

“When I got out, family and neighbors would call. [They’d say,] ‘Hortense, we have this problem,’ and would ask for help,” she recalled.

Once she married José Gallardo in 1946, who served with the Army in the Philippines, she never worked as a nurse again. She raised two children, José Rogelio and Rocxsandra. José served in the Air Force during Vietnam.

“During the Vietnam War, I was in church and crying and I said, ‘Here we go again,’” she recalled. “I was never overseas, but I saw a lot of devastation that came back.”

A lifelong contributor to Disabled American Veterans, Gallardo said her time in the service “made me a better person.

“It made me more loving and more caring. It made me a better human being. I value every day that God has granted me.”