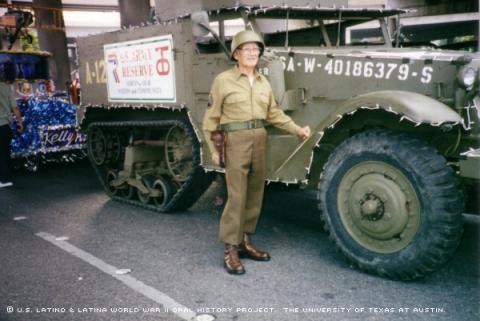 When the government called Hilario Cavazos Jr. to war in October of 1943, he was in his senior year at Laredo's Martin High School, working his way toward college. He asked for an extension to finish high school, but to no avail -- the need for capable men was too great during World War II.

Cavazos joined the Army that October, leaving behind his parents, a sister and three brothers. His fourth brother was already in the military, as part of the 9th Armored Division. Also left behind was his service station job, which he’d held while going to school since he was 12 years old.

"I was able to see many things I had never seen for the fact that I was 18," said Cavazos of his time in combat. "I was in situations that were very critical to me. I mean, I could have been killed any moment, so it's something you don't forget."

Because Cavazos had never traveled more than 150 miles from home, the Army experience also allowed him to get out of the house, be on his own, learn how to get along with a variety of people and learn a new trade, he says.

Cavazos went through basic training at Camp Wolters near Fort Worth, where he was trained in all infantry aspects and was given his first driver's license. He then went to maneuver training at Camp Polk, La., and later joined the 75th Infantry Division at Camp Breckenridge, Ky., where he stayed for six months before transferring to New Jersey and finally overseas to England in October of 1944.

Throughout his military duty, Cavazos was a member of the message center, where he was a message runner for the 290th Infantry Regiment and was on call 24 hours a day.

"I think I was trained very well, and developed how to defend myself and how to fight," Cavazos said. "It was very tough, but it's something we had to do to defend our country."

He stayed in England for about a month and took the opportunity to see the countryside and London before his division crossed the English Channel and arrived in Le Havre, France.

"At that time, I saw rockets, which we called the buzz bombs, going overhead, headed for England," Cavazos said.

A few days later, his division was moved toward Belgium.

"They put us in when the Germans started to break through, so we were able to be there at the time of the breakthrough in Belgium, which was called the Battle of the Bulge," he said.

"We were in the front lines constantly," Cavazos said. "I was a messenger, and I would travel back and forth, and they would be shooting at us. It would be havoc. And then it was very cold, and the snow came and the blizzards came. It was quite a bit to take."

The battle occurred during one of the coldest, snowiest winters in memory in the Ardennes Forest on the German-Belgium border, which made it particularly rough for Cavazos, a man used to the South Texas heat.

"I just did what I had to do," Cavazos said. "I obeyed my orders, and I was sent to one place regardless of how tired I was. I did everything I was told, and I never backed down. If I was scared, I don't remember, because I had so many things. I was always kept busy."

Food was hard to obtain, and a chance to bathe only came every four to six weeks, Cavazos says.

During this time, Cavazos made it a point to write letters to everybody he could. Receiving mail was one ritual he says he could count on throughout the war.

"That's the only thing I remember, that the mail was coming through whether we were on the front or not," he said.

Cavazos rose to the rank of Sergeant with three stripes during his tour of duty. He was discharged in San Antonio in March of 1946, seven months after the war ended.

He immediately returned to Laredo and started his life up again.

He went back to his old high school to earn his diploma, and then attended Laredo Junior College for two years. Unemployment was high, but he was able to start a small mail-order business with his father's help while he attended school. In 1949, he got a job as a clerk with the U.S. Immigration Service.

"After four years, I decided I wasn't going anywhere, so I decided to go to get my other two years and went to the University of Texas, where I got a degree in accounting," Cavazos said.

When he got back to Laredo, he accepted a part-time teaching position at Laredo Community College.

He then began working on getting his master's degree in business administration. In the summer of 1957, he received his MBA from A&I University in Kingsville and became a full-time professor of business and accounting at Laredo Community College -- a position he held for about 30 years.

In 1959, Cavazos married his girlfriend Thelma, and they had two boys.

"I was able to provide a little better than what I was provided with, I believe," Cavazos said. "Although I can't complain when I was raised up, I think I had everything I wanted. But as a matter of education, a matter of travel, I was able to take them to different places while they were growing up."

Cavazos says he thanks God for all his learning experiences, even going to war.

"It was very tough, but I was very proud of what I did," he said. "In fact, I didn't like the infantry, but then I learned to like it. It was very exciting. It was very dangerous at the same time, so that's why I have to thank God I'm alive."

Cavazos says he’s proud to have served in the infantry and would even recommend it. His experiences made him determined to acquire his education, he said.

"It was not easy. It was very hard. I had to study very hard, but I was very determined," Cavazos said. "And I think with determination and desire you can accomplish about anything that you want to. ... You can do it whether you're a Mexican, a black, Indian, whatever you are, whatever you may be -- it's a matter of you to decide to do it."