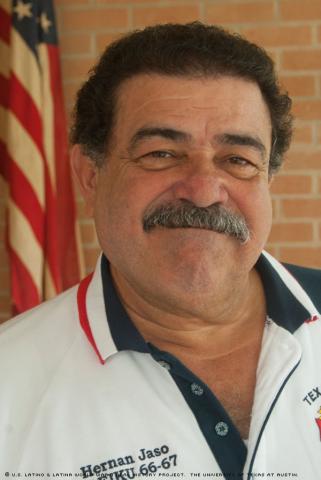 “You can follow around and ask anyone 50 to 100 miles about Hernan Jaso, and you’ll find that somebody knows the kid,” Jaso said of himself.

After his tour of duty in Vietnam, Jaso turned to public policy and a goal of providing a better future for minorities in Texas. As the regional environmental coordinator for the Golden Crescent planning commission, the executive director for the Greater Victoria Hispanic Chamber of Commerce, board president for the University of Houston-Victoria, and three-term mayor of Goliad, Texas, Jaso felt that he achieved his goal.

Jaso was born in Refugio, Texas, on Aug. 29, 1944, to Apolonio and Odilia Jaso. He had two older brothers, Reymol and Rudolfo, an older sister, Diana, and a younger brother, Jorge.

Jaso said his family was very close-knit. His father was a World War II Army veteran who served under Gen. George S. Patton in France and Germany. After the war he worked as a laborer for O’Conner Ranches before serving as a surveyor for Refugio County for 38 years.

Jaso said his family was poor, but they never realized it. “We experienced all the lows of normal families; we never knew we were poor,” Jaso said. “We always had all the love in the world.”

Apolonio Jaso had no formal education, his son remembered. He was a great model to his children. In 38 years as a surveyor, he had only eight sick days, Jaso said.

Jaso described his father as a self-educated man who could speak, write, and read English and Spanish fluently. He could also speak some German and French. He said his father would sit and read the newspaper every day. His father was also born in Refugio.

Jaso said his mother, who born in McFaddin, Texas, worked as a homemaker and a seamstress in Refugio. Jaso added later that she was “a direct descendent of the Benavides family that founded Victoria, Texas. … My kin shaped Texas for what it is today.”

Jaso finished Refugio High School at 17 and attended Victoria Junior College for two years before he was drafted into the Army in 1965.

Jaso laughed as he admitted that he tried to get married to avoid the draft. He tried to persuade his girlfriend, Julie Hernandez, to marry him but she didn’t want to leave her family. Her father had been injured in an accident, and she became her family’s main financial support. She worked as a receptionist at a power company.

Two days before basic training ended, Hernandez called him and told him that she wanted to marry him. It was Jaso’s turn to hesitate. He was nervous because he had no money. But she assured him that she had taken care of everything -- even the rings, both gold bands. Jaso returned home to marry her before he left for more training at Fort Eustis, Va.

“I have no idea why she would change her mind,” Jaso joked later, “except the fact that I was the best looking guy in the world, and she figured she better latch on to this one-time chance!” They have been married for more than 45 years.

In basic training in Louisiana, the young recruits were prepared for what he called the “Vietnam conflict.” Jaso said that at the time no one knew what they were being trained for, but as he looked back at it he realized that the training served him well in Vietnam. It was also in basic training that he learned what Vietnam really was.

“[Before,] I could care less, you know. I was in the barrio picking up girls and whatever. It didn’t bother me, although I knew it was there,” Jaso recalled, referring to the war raging in Southeast Asia.

Jaso left basic with a deep and lifelong respect for what the experience taught him. He added later that “one learns responsibility and is disciplined beyond the norm. I personally feel that every young person should have to go through at least [eight] weeks of basic training before going into the real world.”

After basic training and his marriage, the Army sent Jaso to Fort Eustis to learn the sheet metal trade so he could repair aircraft. Jaso said that the Army was hyping them up and telling him and his fellow specialists that they would be repairing helicopters in Vietnam.

After he completed his training at Fort Eustis, the Army reassigned him to Fort Campbell, Ky., home of the 101st Airborne Division. At first, the assignment puzzled him. He didn’t realize that they had been mobilized. His unit, the 604th Transportation Company, 14th Transportation Battalion, was attached to the 101st, and they were deploying to Vietnam together.

In March 1966, the soldiers sailed to Vietnam aboard the U.S. transport ship General Nelson M. Walker. Just off the southern coast of Vietnam, they boarded Patrol Torpedo (PT) boats and prepared to land at Quy Nhon.

Jaso remembered the soldiers were tense. They expected bullets to fly as soon as they hit the beach because their company commanders told them that they were going to storm ashore just like at Normandy and Iwo Jima. The men “geared up,” Jaso said, and were ready to take on whatever awaited them on the beaches.

But once the doors dropped onto the sand and the men ran out, they stopped in confusion: There were men in swimming trunks lounging in chaise lounges. Apparently, Jaso and his company had been dropped off at an Australian recreational center.

From Quy Nhon, cattle trucks transported the soldiers to Camp Holloway in Pleiku. There were various companies stationed at Camp Holloway, and Jaso’s company set up in its own area.

Jaso recalled that there were 2,000 to 3,000 men stationed at Camp Holloway, and there wasn’t a single American woman. The Army hired Vietnamese women to clean and cook for the men. It was cheap labor. The Army called them independent contractors.

The risk of having local residents work on Camp Holloway became evident one night about eight months into Jaso’s assignment. He was on guard duty outside when mortar fire rained down on the base. Jaso said the shells seemed to be aimed at the bunkers but the angle was incorrect. Jaso said there was a fuel depot behind the bunker where he was stationed for guard duty. The U.S. servicemen later supposed that the enemy forces wanted to hit the fuel bladders but missed.

After the bombardment stopped, the soldiers lined up in one line across the base and scoured the entire base for whoever could have been feeding information to the enemy. Jaso recalled that they found six Vietnamese barbers employed at the base hiding in tunnels and radioing information about the base.

Jaso stayed at Camp Holloway for 13 months. When his tour of duty in Vietnam ended, he was allowed to go home to Goliad before reporting to Hunter Army Airfield in Savannah, Ga., to finish his Army service. He left Vietnam in February 1967.

“I don’t think I ever fully understood what [Vietnam] was,” Jaso said, looking back on his experience there. “I served my time because I was drafted to do my time. I served with pride and [did] the best I could. Hispanics never questioned why, they just served.”

After Jaso received his honorable discharge, he worked at E.I. DuPont as a lab analyst, a career that lasted 18 years, and later as a special investigator for the Texas attorney general. He later attended college and earned a degree in criminal justice.

He also began a dual career in public service. After Jaso’s friends helped him register all the eligible Latino voters in town, he won the mayoral election, earning the nickname “Landslide Jaso.” He served as mayor of Goliad three times, from 1977 to 1982.

When Jaso realized that half of Goliad still had dirt roads and all five of the public swimming pools were closed to minorities, he applied for grants and got a new junior Olympic-sized pool built and the streets properly paved. He also provided insurance and better wages for city workers.

Jaso also worked with Mexican and Texas officials to erect a 16-fooot bronze statue in Goliad honoring Ignacio Zaragoza, the Goliad-born Mexican general who defeated French forces at the Battle of Puebla on May 5, 1862. The annual Cinco de Mayo festivities celebrate this victory. Jaso was among a team of Americans honored in Mexico, he added, “for building international relationships between two nations.”

At the end of his third term, he ran for state representative and lost.

Jaso also tried to make a difference in the field of education. In 2003, he began the first of three terms on the President’s Regional Advisory Board at the University of Houston-Victoria. The board, he explained, advises the university leadership “on all affairs of the University.” Jaso served two terms as president of the board. His greatest accomplishments, he said, included the steady growth of the student population and persuading the Texas Legislature to consider the university a four-year institution instead of a two-year institution.

Jaso said that he worked all his life as a public servant, and even though he retired, he still works to make his community the best it can be.

“Let me tell you,” he said matter-of-factly. “You could search in any direction in Goliad and you’ll see my name with something I’ve accomplished.”