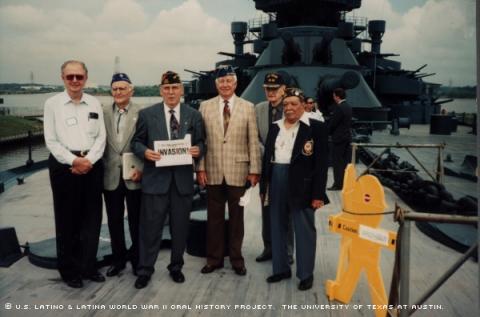 On June 6, 1944, Herman R. Cortez and his fellow soldiers scurried down side ladders onto landing crafts alongside a U.S. military ship as it dropped anchor on the coast of France, placing the men as close to shore as possible. As soon as the plank dropped, the soldiers jumped out and began making their way up Omaha Beach amid a shower of artillery shells from German soldiers.

Nearly 58 years later in Houston, Texas, as he sits wearing his Veteran of Foreign Wars cap covered with military pins, Cortez doesn’t look like an 81-year-old World War II veteran. Instead, his skin is smooth and his face has a calm expression. He wears large glasses and sports a thin gray mustache.

His hasn’t been an easy life; yet this is a man who’d gladly fight for his country again if he had the chance.

"I regret that I can't volunteer anymore," he said. "When I see what's happening, I wish they would take me," he said, referring to the current conflict in Afghanistan.

Cortez's desire to fight and care for others began even before he enlisted in the U.S. Army at the age of 19.

Born in 1920 in Victoria, Texas, 130 miles southwest of Houston, Cortez was the son of Leonidez Cortez, a native of Mexico, and Geneva Cortez of Berclair, Texas, a small community between San Antonio and Corpus Christi. His father died of unknown causes when he was 7 and his mother was left to care for six children, two twin boys and four girls. Two years later, he and his family moved to Houston.

Cortez earned a meager salary, averaging about $3 per week, working at a cotton compressor and other odd jobs. So the young man quit school after the eighth grade to help the family, laboring as a busboy and dishwasher in restaurants.

Despite his best efforts to help his family, he faced handicaps -- his young age and rampant unemployment during the Great Depression. At age 16, Cortez decided to enter the Civilian Conservation Corps, a New Deal program designed to help young men earn money during the Great Depression. The CCC took him to Globe, Ariz., and throughout Texas sporadically for four years, and he would send a portion of his earnings home to his family.

As a trained infantryman, he was assigned as an artillery forward observer in the 105mm Howitzer-armed 37th Field Artillery Battalion, part of the 2nd Infantry Division.

"We had to go to the frontlines to locate the enemy, call the artillery and give them the range," said Cortez, whose highest rank achieved was Private 1st Class.

In 1943, Cortez was shipped off to Northern Ireland to train for what was to become the D-Day invasion of Normandy, France, on June 6, 1944.

"We knew it was going to be a shooting gallery when we came off the landing crafts and the Germans were sitting on the bank, shooting at us," Cortez said. "I just thought, 'If the good Lord wants me, I guess I'll go this time. If not, I'll keep on going because this is what I was trained for: to fight.'"

After the grueling Normandy invasion, Cortez's division continued to fight across Europe, through Paris and into Belgium and Germany.

In late December of 1944, shortly before the Battle of the Bulge in the Ardennes, Cortez was blinded for three days after an explosive went off close to his foxhole. The doctors prepared to send him to a hospital in England, but the private resisted.

"I said, ‘No sir, I'm not going to a hospital. I got my eyesight. I want to go [back] to [the battle]. If I quit now, I won't be good to myself or to anybody else. I'm gonna lose my nerve. I want to go back and face what I had to face. I won't be free until the end," Cortez said.

Cortez's mother died of cancer while he was in Europe, but his family didn't tell him.

"My sister . . . didn't want to mention anything because she didn't know how I was going to take it," he said.

As his division moved through Germany, they passed by incinerators where the Nazis had killed millions of Jews and other prisoners, a sight that left him horrified.

"We went close to the burners where they burned the Jews, and I didn't even want to get close because of the smell of dead people," he said.

The end of the war in Europe found Cortez and the 37sth Field Artillery Battalion in Pilsen, Czechoslovakia. They then were flown home on July 20, 1945.

Cortez said it was difficult to secure employment once he returned to Houston. He held a variety of jobs, including employment as a barber and lab technician.

In 1949, Cortez married Aurora Solis. They have one daughter, Carol Susan Cortines; one son, Herman Cortez; five grandchildren and one great-granddaughter and a great-grandson.

For 30 years, Cortez worked in the Houston VA Hospital in the engineering division. Today, after retiring in December of 1978, he continues to help the needy.

"I remember during the holidays what we went through when we were kids. If we got an apple or an orange, that was too much," he said. "So I remember these kids that don't have anything."

As a soldier, Cortez earned several medals for his efforts, including the Bronze Star, the Medal of Good Conduct, the EAME Campaign Medal with five bronze stars, the American Defense Service Medal and the Jubilee of Liberty Medal, awarded by France for his participation in the Normandy invasion.

Holding up his display of medals, Cortez's face is that of a proud veteran who knows he did his best to help his country. To this day, he shares an empathy and respect for those who fight for the U.S.

"I'll salute anybody who puts on a uniform," he said, "because they are doing for their country what somebody has to do, whether they like it or not."