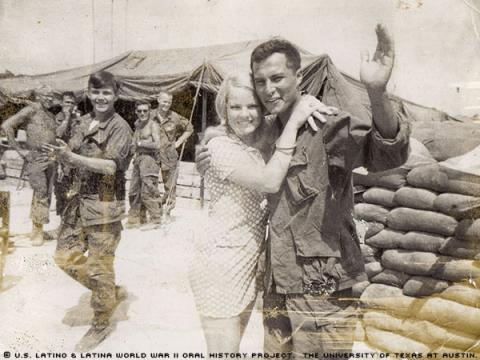 The horrors of the Vietnam War remained so etched in his mind that for decades, Henry Soza Jr., continued to be haunted by what he had seen and heard.

As a U.S. Army Combat Medic supporting Troop B, 5th Squadron, 7th Cavalry, 1st Cavalry Division (Airmobile), Soza saw more than his share of pain and death. His actions so distinguished Soza that he was twice awarded the Silver Star, one of the nations highest military decorations for valor, as well as a Bronze Star.

But the futility of the war drained him.

War is so sad. The [weapons] that they had can tear you apart so badly, Soza said. It was too much of a hardship, the killing, the mutilation of a body from explosions.

When he was in the fifth grade, Soza started going to work with his father, a foreman at Southwest Feed & Seed Co., in Glendale, Ariz. He completed an apprenticeship in sheet metal work just a couple of weeks before he was drafted on Oct. 12, 1967.

He went to basic training in El Paso, Texas, and he underwent medical training at Fort Sam Houston in San Antonio.

He recalled the men in his unit as being very young, and most did not have a college degree. Soza and his captain were the oldest at age 25.

He first arrived in South Vietnam at Cam Ranh Bay.According to his military records, Soza was awarded his first Silver Star for actions on April 1, 1969, in what was then the Binh Long Province of South Vietnam, when his unit came under heavy fire. Soza, exposed to enemy fire, treated and then evacuated several casualties from a forward position. And when the units radio telephone operator was seriously wounded, Soza once again crossed an open area to reach the wounded soldier and bring him back to safety.

His actions undoubtedly saved the life of his fellow soldier, the document states.

He was awarded another Silver Star for his valor on April 17, 1969, when a platoon was pinned down by fire from several enemy positions. Three men had been hit, and Soza crawled across open spaces to reach the men, treat them and then drag them to safety.

He was awarded the Bronze Star with V Device for valor for actions on April 9, 1969 when, while under heavy fire, he treated several wounded men. When a platoon leader and two men were pinned down, Soza reached them and treated the wounded and then carried one man, who was unable to walk, back to a secure position.

Soza was discharged on Oct. 5, 1969, with the rank of specialist 5th class. He also was awarded the National Defense Service Medal, a Vietnam Service Medal, Vietnam Campaign Medal and an Army Commendation Medal.

Soza recalled that he took a taxi home from the airport when he returned to Phoenix and that his first stop was at St. Matthews Catholic Church. The young man, who had attended Catholic school until his sophomore year of high school, said he went to his church first to thank the Big Guy for bringing me home alive and in once piece.

When he arrived home, his parents and sisters gave him a warm welcome. But Soza said he felt that public reaction was negative. He said he never personally experienced discrimination because he was a veteran, but he saw it on television. There was a growing and widespread anti-war resistance, and a call for U.S. troops to be pulled out of Vietnam.

Soon after returning from Vietnam, he said he was uncharacteristically moody and touchy at his job as a sheet metal worker.

Ive heard the term get over it. And maybe we should, Soza said. But you dont forget something like that, theres too much hurt that you see. How do you get over that?

He began having nightmares about his unit being ambushed and the men being killed. They were so vivid and horrible that one time, in September 2004, he kicked his bedroom wall so hard that he injured his right foot and eventually required surgery in 2006. After that, he started sleeping in the middle of the room, away from walls.

To aid in his recovery, Soza began treatment with a psychiatrist and was prescribed medication. But he admitted at the time of his interview that his condition had gotten worse over time.

That really was a start in the right direction, he said, referring to seeking counseling. But as I got older, things got worse. I was waking up screaming. I even slugged the wall with my hand."

He said he knew many Vietnam veterans suffered similar effects from the war and that they ended up in even worse situations than his. He said some turned to alcohol to cope with the aftermath, and some to drugs. Some became homeless and others lost their families.

But Soza said that he believed he was on the road to recovery.

Soza saw parallels between the Vietnam conflict and the wars in Iraq and Afghanistan, but he hoped that servicemen and women who have been sent to those places receive adequate medical treatment for physical and mental conditions.

Although Soza was a draftee, he seemed to have little regret about his service.

When youre called, dont be afraid to step up to the plate, Soza said. You go and do your part for your country.

Soza, who has joined Disabled American Veterans, retired from sheet metal work on July 1, 2003, after working for nearly 36 years.