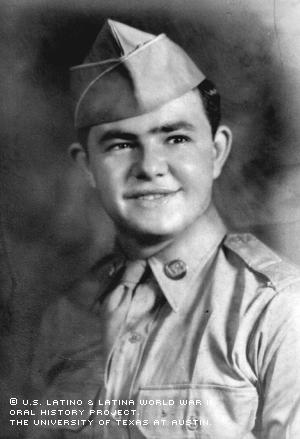 Not everyone in World War II worked on the front lines or manned the battleships. There were those who served behind the lines, who provided basic services and support and who were often taken for granted.

Henry A. Bebon never felt his contributions during the war were any less than any other soldier. He did what he was ordered to do and carried out his assignments accordingly.

Bebon was stationed in the Marshall Islands in the South Pacific, assigned to work in the officer's club. He performed any number of jobs needing to be done while there.

"You know, odd jobs and whatever there was to do. But I was never on a ship or anything. I was just stationed there until the end of the war in 1945," he recalled.

Bebon remembers pulling late nights while on guard duty on the islands. Other times, he says he assisted in replenishing ships with munitions and food supplies.

While he may not have carried and fired a rifle, Bebon believes his support work was just as crucial then as it is today, especially when working with the Veterans Honor Guard in his hometown of Brownsville, Texas. Today, the 78-year-old spends much of his time helping disabled WWII veterans who are unable to physically care for themselves.

To Bebon, it has always been important to be a good citizen and help others. In that regard, he says he has spent his entire life dedicating his support and services to others.

Born Dec. 20, 1925, Bebon came from a military family. His father, Frank Bebon, served in the Army for 30 years and fought in World War I. His grandfather, Jacob Bebon, was a soldier in the Spanish-American War.

"I knew that I would have to go in sometime. There was a job for everybody; the Army, the Navy, the Marines, the Coast Guard, whatever," he said.

Bebon remembers his father taking him and other children to Boca Chica Beach in South Texas, where American soldiers were training, and wondering when his time would come to serve.

Bebon says he was drafted into the military before he finished high school but that the military allowed him to complete high school and earn his degree before sending him to San Diego, Calif., in June of 1944 for Navy basic training.

After he was released from the Navy on June 6, 1946, at the rank of Seaman Second Class, Bebon returned home and met his future wife, Maria Lesbia Ramirez, at a dance in Brownsville. She was five years younger than he was but he says knew she was the one for him.

Bebon enlisted in the Army in 1947 to save money so he could get married. He says tensions were flaring in the Far East, so he was sent to Tokyo, Japan. He proposed to Maria before he left and she waited three years for him to return.

Bebon worked in the laundry room of the 1st Cavalry Division in Tokyo. All the while, he sent his fiancé letters, handkerchiefs and Kimonosfor from Japan, where he spent two and a half years before returning home.

"It was still peace time in those three years before the Korean War broke out," he said, "Some of my friends had to go to Korea to fight and I never did hear from them again."

Many of those who did return, however, took advantage of the GI Bill.

"When they came back, they all started getting their high school education, their GED," Bebon recalled. "They started going into training to become a mechanic, or other provisional trainings, and getting jobs because of the GI Bill. They paid for your education, so it was a good chance to get educated."

Bebon, however, married and decided to get a job to support a family that would eventually include two sons and two daughters. He found employment as a clerk at the U.S. Post Office in Brownsville, where he worked for 37 years before retiring in 1988. Most of the people who worked there were veterans, including the Postmaster, so he felt right at home, he says.

"I joined the Veterans Honor Guard. We give services to veterans. You know, someone has to do it," Bebon said. "But now, WWII veterans are going pretty fast. They're all in their 70s or 80s and the Korean veterans are right behind us. Most of them are in their 60s or 70s. That's the way it is, you have to take life as it is."

"The American Legion meets every month but I like being in the Veterans Honor Guard because it gives me something to do, see veterans and give them services they need," he said.

Recently, a veteran from Port Isabel passed away and Bebon and others provided aid and support to the surviving family. Then he and the Coast Guard took the remains and scattered them on the Padre Island Beach, where the deceased soldier had spent so much time as a child, Bebon says.

"Wars are ugly, you know," he said. "They bring carnage and destruction and nobody wins. The end is still up to God. We know that but I don't know what makes people do that. We've been fighting since the world began, I guess. Like right now the Israelis and the Palestinians, they're fighting each other and the hatred never ceases over there. The hatred is very prolonging. …

"I enjoyed my life in the service but I wasn't going to stay in there forever. My dad put in 30 years and others put in 20 or 25 years. But it is good to be a veteran, that's all," Bebon said.

Mr. Bebon was interviewed in Brownsville, Texas, on August 13, 2003, by Lynn Maguire.