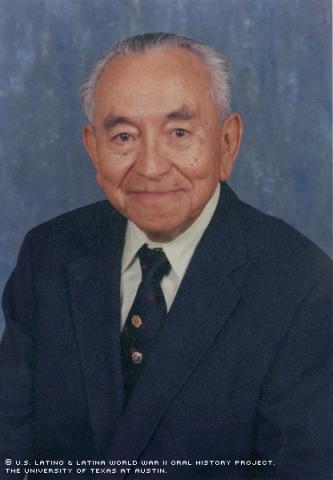 Hector De Peña never saw any action on the battlefield during World War II. He never stormed the beach at Normandy, never liberated the prisoners of Europe's concentration camps and never fired upon the Japanese or Germans. The war he fought was against the entrenched discriminatory practices used against Latinos during the time of the war.

De Peña was born in Hillsboro, Texas, on Oct. 22, 1914, to Carlos and Dominga De Peña. He was one of six children his father supported through a shoe repair business that suffered from the effects of the Depression until the family moved the business to San Diego, Texas, in 1929. Newly settled with his family in the small town, the elder De Peña began to include saddles in his repair work, and his business flourished. De Peña said he worked alongside his father, learning "almost all of the trade."

De Peña said his high grades in high school allowed him to graduate in three years, at the age of 16. Afterward, he began his pre-law studies at Texas A & I in Kingsville; it was there he encountered his first brush with segregation.

"We were only about 10 Hispanic students in the college, and they had a separate bus for us. We didn't go in the regular bus; we went in this smaller bus," De Peña said.

Although De Peña received a certificate to teach high school, he said he couldn’t get a teaching job in the Kingsville area because of his race. He had an aunt who lived in San Antonio, so he attended night courses at the San Antonio School of Law, receiving his license in 1937. He then returned to San Diego and opened an office above San Diego State Bank.

According to De Peña, he had to leave San Diego within three months because he was unable to build a clientele. His father had angered George Parr, a powerful and prominent politician in the area, by criticizing his political practices, which included buying a ranch house with dubiously acquired funds, according to De Peña. He said Parr discouraged prospective clients from hiring him because of the grudge he held against his father.

De Peña moved to Corpus Christi, Texas, in 1937, where he became legal council for the Mexican Consulate. There, he said, the discrimination against Latinos was even worse. He said a waitress in a restaurant once refused to serve him because, according to her, "they didn't serve Spanish-speaking people." It was a challenge for Hispanics to receive service in other public places as well, such as movie theaters.

"If we wanted to go to the movies, we went upstairs with the blacks," he said.

Then came the decision that would empower De Peña to do battle with the discriminatory practices in World War II society. His brother, Fernando, helped organize the League of United Latin American Citizens (LULAC) in Corpus Christi, De Peña added in a letter after his interview.

"My brother was the first secretary for the organization," he wrote.

De Peña himself then joined the organization and was elected president of Corpus Christi LULAC, a position from which he worked to "improve the standing of Latino citizens." One of the organization's major accomplishments was challenging a city ordinance that barred Latinos from swimming at Cole Park.

De Peña was working as an attorney when WW II broke out. He attempted to join the Navy, but was rejected after a physical examination in Houston, he said. Later, he was drafted, but was classified as "4-F," which allowed him to serve his nation without the physical demands of training and combat, he said.

De Peña served as a civilian in the Office of Censorship for the Navy, recording international phone calls between Mexico and the United States. When asked whether it troubled him to be excluded from active combat duty, while watching many of his friends go away to fight, he said, " Well, I couldn't do anything about it, that part."

His brothers also served in the military.

"One of my brothers was in strategic bombing in Italy. And then my other brother had been in California, but he only got to England, and I don't know how the other brother found out. And so, I guess he asked for a leave to go to England to see him, and he was given a leave. And if he had not taken that leave at that time, he would have been killed, because his group had a crash at that time," De Peña said. All members of the flight crew died.

De Peña and Elena Tamez were married in 1942, and they bought a duplex in McAllen. At one point, after moving to Corpus Christi, De Peña said he tried to buy a vacant lot, but the owner refused to sell it to him because of practices that prohibited the selling of land to minorities. De Peña got around that obstacle by giving his money to an Anglo brother-in-law to make the purchase for him, he said.

Fighting discrimination on the political front was just as difficult for De Peña. He tried unsuccessfully to run for several offices, including State Representative and judge for the Court of Domestic Relations. He even tried, after serving six years as an Assistant County Attorney, to run for the position of County Attorney. He still lost.

De Peña’s break finally came when the judge's position for County Court at Law #2 became vacant. When an Anglo judge who occupied the position died, De Peña was "appointed to the position by Commissioner Solomon Ortiz, and served on that bench for 16 years," De Peña wrote.

Elena De Peña struggled in her own right to find employment as a nurse for the local school district. She also suffered from the unfair hiring practices used against minorities, but she eventually found her own success "when she became an associate professor of school nursing at Del Mar College for 12 years," De Peña wrote.

The De Peñas have three children: Hector Jr., who took over his father's position on the bench in the same court; Carla Elizabeth De Peña, who holds a master's degree in counseling and psychology; and Charles A. De Peña, who became a neuroradiologist.

When asked if he thinks relations between Latinos and other groups have improved, De Peña said they have, but "not 100 percent," adding that he thinks the lives of Hispanics have improved financially.

And his advice to younger generations?

"Well, live at least a normal life, stay out of trouble and be good sons and daughters."