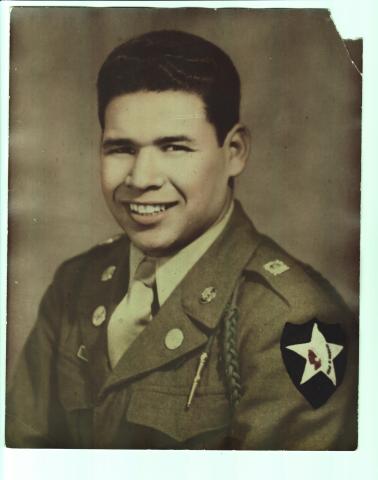 A lifelong athlete and a trailblazing educator and coach, Hector Albert Padilla is no stranger to the discipline, hard work and camaraderie that goes into assembling a strong team.

Padilla was born in Tucson, Arizona, on March 22, 1930, to Manuel and Concepcion Juarez Padilla. His father worked as a boilermaker for Southern Pacific Railroad, and his mother was a seamstress.

His early childhood memories evoke pleasure and excitement, but also tragedy. He grew up only two blocks away from the football stadium of the University of Arizona and has fond memories of running around the “playground.”

During Padilla's childhood, his father became more and more ill until his death at the age of 42. Padilla was just 8 years old at the time.

Padilla and his older sister, Celina, moved to East Los Angeles with their mother, who found work as a seamstress. Because she was skilled at her craft, the family was able to settle into a new home.

Padilla remembers being fascinated with the Evergreen Playground, where he spent hours of his free time. The grassy playground was something Padilla had never seen in Tucson, and it was where he first got involved with sports.

Padilla grew up to be a prominent and successful athlete. He was captain of Roosevelt High’s football team and the school’s baseball star.

Padilla wanted to further his education. In his senior year, he was offered a football scholarship to Occidental College in Los Angeles. His goal was delayed, however, when he did not pass the English entry exam and had to go to Los Angeles City College instead.

In 1948, one semester into his studies, the government introduced the Universal Military Training program. The program was implemented so the country would have more and better-prepared soldiers in the event of a military draft. The men summoned to the program were asked to complete one year of full-time Army duty and four years of active reserve afterward. The four years of active reserve duty allowed the men to complete their college education.

Padilla enlisted in the Army on Aug. 3, 1948, at age 18. He was sent to Fort Lewis, Washington, for basic training and was stationed there for one year. He performed his duties with the 9th Regiment, 2nd Infantry Division.

Living in a new environment and associating with new people was a positive experience for Padilla.

“Everything was so green, and it rained so much up in Seattle,” Padilla said.

During his time at Fort Lewis, Padilla formed bonds with his fellow soldiers and says there was no sign of discrimination.

“We were [a] mixed group at Fort Lewis,” Padilla said.

After his service at Fort Lewis, Padilla returned to Los Angeles to complete his college education. However, as part of the active reserve, Padilla had to train in San Pedro on the last weekend of every month for four years and full time for two weeks at Camp Roberts each summer. On top of the training commitment, there was the chance of being activated and sent overseas. Luckily for Padilla, he was never activated during his reserve duty.

“One summer I was sure they were going to activate us. We were given gear and a weapon, but they never did," Padilla said.

Padilla completed two years at L.A. City College, where he also played football. He then transferred to Occidental, where he played under coach Roy Dennis.

He majored in physical education, in hopes of becoming a teacher and coach. The fall months were tough because he had to perform at a high level on the football field and on military training grounds.

Football games at Occidental College would be followed by a day of training in San Pedro with the active reserve. The effort demanded a lot from Padilla, both mentally and physically.

“I was in peak physical condition at this time. I had to be," Padilla said.

Padilla graduated from Occidental in 1952 and two years later received a master's degree from California State University, Los Angeles. With his experience and leadership, Padilla earned his first coaching job in 1960 at his former school, Roosevelt High.

“I am really proud [of] the fact that I am the first Mexican-American head varsity football coach in the city of Los Angeles,” Padilla said.

Padilla became a mentor to many of his students and players at Roosevelt. His coaching and teaching style reflected the leadership skills and discipline he had learned from his time in the military.

“I was looked upon as the father image for 80 percent of those guys; they didn’t have fathers at home," Padilla said.

In 1973, Padilla started coaching and teaching at the college level, when few Mexican Americans were in the field. Padilla says he was the first Mexican American to become head varsity football coach for a college or university.

Padilla says he has been able to create a positive change in his community through his military experience and his relationships with the young men who passed through his classes and football teams.

“Because of the position I have achieved, people have looked upon me in a respectful manner,” Padilla said.

Mr. Padilla was interviewed by Henry Mendoza in Los Angeles on Jan. 7, 2011.