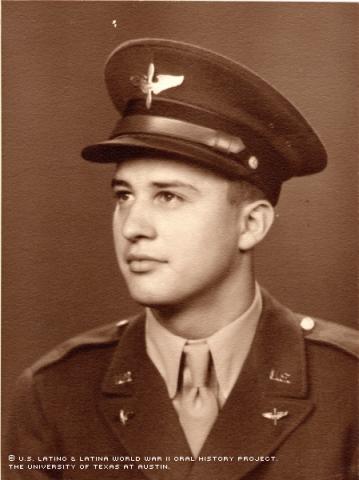 On Dec. 7, 1941, Harold Valderas, then a senior at George Washington High School in New York City, was doing his homework while listening to the radio when he heard the report about Pearl Harbor.

"Little did I realize, before long, I'd be in the service myself," Valderas said.

In the spring of 1942, at the age of 18, Valderas dropped out of high school early to enlist in the Army Air Corp Cadet Program. (There wasn’t a draft for 18- year-olds at the time.)

"I always thought in the back of my mind I'd like to go to college, but I didn't think it was possible," Valderas said.

No one in his family had ever attended college.

After the war, with the help of the GI Bill, he’d be the first in his family to receive a college education.

"I hate to say it, but maybe the war was the best thing that happened to me, because after that, with the GI bill, I had the opportunity to go to college and make something of myself," Valderas said. "Before, it seemed out of my grasp."

Born Dec. 17, 1923, in New York City, Valderas was the son of Chilean merchant mariner Louis Valderas. He grew up bilingual, but spoke mostly English since his Irish-Polish mother, Elizabeth Cunningham, spoke only English and the majority of his high school peers were English-speaking Anglos.

In the military, Valderas was among the youngest, and the only Latino, training at Hicks Field in Fort Worth, Texas. Looking back, he wonders why there weren’t more Hispanics.

After training, he became a Link Training Instructor, teaching instrument flying to pilots and cadets at Waco Army Airfield. He also taught instrument flying to B-26 pilots at Dodge City Army Airfield in Kansas. He continued his education as part of the Army Specialized Training Program, studying engineering at Grinnell College, in Grinnell, Iowa, and City College of New York.

In June of 1944, shortly after D-Day, Valderas was sent to Grove Air Base in England, where he served as an Airfield Controller in the 8th Air Force, directing air traffic under combat conditions. He recalls only directing planes with light signals, to prevent interception of radio communications by the Nazis. Valderas continued to do this until December of 1945.

"I was excited," he said about going overseas. "I thought maybe I'd get to do some fighting or something."

Valderas remembers keeping cows off the runway in addition to keeping a watch on the planes. He also says he directed Bob Hope's plane as it landed; however, he wasn’t able to go hear him perform, as he was working at the time.

"They say war is hell, but it wasn't hell for me," Valderas said.

He calls himself a bad writer, but says he wrote home anyway, particularly to his then-girlfriend, Meryl Graff. In letters saved by Graff's mother and returned to Valderas years later, he wrote about work, but mostly about missing Meryl and how often he thought of seeing her again.

Her letters kept up his morale by giving him something to look forward to.

"It was nice to think about coming home to someone," he said.

But the couple took separate paths when Valderas returned to Texas after the war and attended Southern Methodist University in Dallas. He was the first Latino in his fraternity at SMU, Sigma Chi, and was the only Hispanic in his law class.

Valderas received his Bachelor's of Business Administration in 1950 and was only nine hours shy of his law degree when he was recalled into active duty during the Korean War. He was assigned to serve with the Air Force as a Special Agent in the Office of Special Investigations. His rank, Second Lieutenant, as well as his work, was classified, and he wore civilian clothes while working counter-intelligence investigations, security and personnel background investigations, and probes of major criminal offenses involving the Air Force and its personnel. Valderas worked both in the U.S. and Japan and Korea. He served as the commanding officer of the OSI detachment at the K-55 Airstrip in Osan, Korea, until the end of the Korean War.

Valderas says he’d have just as willingly gone to the front lines of battle. In hindsight, he calls his young and brave attitude foolish because he didn’t think about dying at his age.

"I can never say, in both wars that I've been in, that I've been a hero or that I was in grave danger, but they put me where they (military authorities) thought I would serve best," he said.

At the close of the Korean War Valderas returned again to Texas, to finish his law degree and open a private law practice in Fort Worth in 1955. He was the only Latino attorney at the time with a private practice, he says.

Valderas met Marisa Garcia, of Seville, Spain, in the winter of 1965. Two weeks later, he proposed to her, and that month, December, the two married. The couple had four children: Harold, Elizabeth, Sean and Cristian, and have four grandchildren. The couple eventually divorced, and Valderas married Ruby Gillian in August of 2002.

In 1969 -- when he was Staff Judge Advocate for the 301st Tactical Fighter Wing, legal adviser to the commanding general -- while in the Air Force Reserve at Carswell Air Force Base, Valderas began a series of firsts for the Hispanic legal community. He became the first Latino judge in the North Texas area when he was appointed municipal judge for the city of Fort Worth in 1971. He was also the first Hispanic in Central Texas to serve as State District Judge in 1977 and the first Latino senior district judge in 1987.

Valderas actively promoted the advancement of Hispanics and other minorities in Fort Worth through his leadership positions in the community, including Past President of the Hispanic Chamber of Commerce, President of the Rotary Club and Co-founder of the Fort Worth chapter of International Good Neighbor Council. In most cases, he was pioneering as the first Latino in the role.

Valderas’ advice to younger generations is to stay in school. He says hard work makes a person's goal possible and points to his own life as an example.

"I'm a judge and I didn't come from a family of judges or lawyers," he said.

Valderas retired from the military after 31 years of service including two wars, and receiving five battle stars and 13 military decorations, including the Meritorious Service Medal. But he doesn’t consider himself a regular military man.

"I'm the type of person that if there's a war going on, and it's my country, I want to be a part of it," Valderas said. "When our country's in trouble, and needs me, that's where I want to be."

Mr. Valderas was interviewed in Austin, Texas, on September 18, 2003, by Violeta Dominguez.