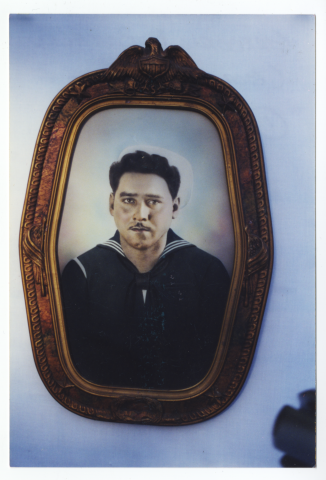 Botello also includes excerpts from interviews and diaries of each of his brothers (except for Crisantos, or “Cris,” because Botello apparently didn’t have access to a diary and Cris had died before Botello began conducting interviews). These accounts detailing the various homecomings are often accentuated with homespun details. For example, Gregorio Botello describes in the interview excerpt below the psychological impact the war had on his brothers, which became apparent one time some friends of the family came over for a visit and started asking about the conflict:

I remember that it started with Trine when Mr. Menchaca asked him of the fighting in the war and Trine responded that he just did his part, and told him he didn’t want to talk about what he had seen or done. But I remember especially when they asked John and Simon, they answered about the same as Trine had, and then got up and walked out of the house and isolated themselves under the big oak tree on the side of the house. When I went to see why they had gone out, they told me they didn’t want to stay inside because Mr. Menchaca only wanted to know about the war experience they had had and they didn’t want to talk about it. That’s when I knew they had it pretty rough in their combat actions, or whatever they did in the wars they were involved in. … I remember thinking since I personally didn’t have any combat action while I was in the service, I was in no position to know how one feels going through the war combat action as they did. … [W]e have never talked about their war experiences at all. The most I

ever heard was from family members saying that when they tried to say something about an experience they had, they would get very emotional and couldn’t finish anything they started to say.