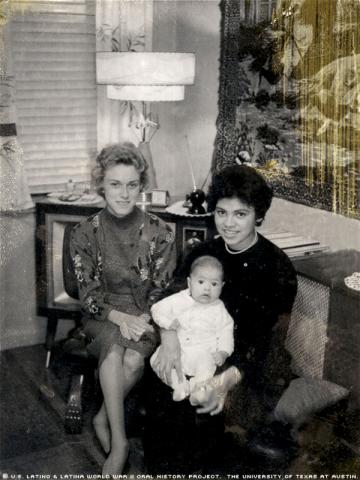 The United States should have let the Vietnamese fight their own battle during the Vietnam War, said Gloria Lerma Rodriguez.

Among many other bizarre aspects of the war, which left many “mentally disturbed,” Lerma Rodriguez said, American soldiers at times slept with allies and enemies in the same foxhole.

“It was terrible, using innocent children with grenades hidden under their clothes. Very unjust. Thanks to God it’s over,” she said.

“Whoever can hear me will probably think I’m a traitor to my country, but this war didn’t prove anything. Nothing was gained,” Lerma Rodriguez said, adding that her brother-in-law was in the Vietnam War and came home a different person.

“To me, it sounds like he had a breakdown,” Lerma Rodriguez said. “He took drugs, maybe he thought [that] was going to solve his problems … He came home with an honorable discharge, but ever since then, he and his wife weren’t getting along.”

He had no problem finding employment after the war, but he was unable to keep his job because of his drinking habits, she said. He passed away a long time ago.

Lerma Rodriguez said she had opposed U.S. involvement in the war in Vietnam from the very beginning, when she was 25 years old.

Nearly 55 years ago, Lerma Rodriguez attended Jefferson High School in El Paso, Texas, where the school’s principal wanted students to practice speaking English, so they would be able to get jobs. Students were not allowed to speak Spanish on school grounds.

When teachers and principals wanted students to talk among themselves, Lerma Rodriguez said, “they would say, ‘All English.’ And so, instead of trying to speak it, you know, we would just be silent. We wouldn’t say anything.”

The students were afraid they would speak English incorrectly, as they did not know how to begin or where to start, Lerma Rodriguez said.

She recalled learning most of her English at school, then practicing at her part-time job selling boys clothing. She received a 20 percent discount on clothes and high-heel shoes at her job. It was a big deal for her to be able to buy such merchandise because of her family’s economic situation. Although the 14 children would sleep with four or five to a bed, the children never had to share clothes, Lerma Rodriguez said.

Having 13 brothers and sisters, Lerma Rodriguez joked that once her mother, Elisa Rivera Lerma, got married, she never had a menstrual period again. Elisa would count the number of heads when the children slept to make sure all of them were accounted for, Lerma Rodriguez recalled.

In 1957, she graduated from Jefferson High, the same year Raymond Telles was elected the first Mexican-American Mayor of El Paso. He ran unopposed for a second, 1959-1961 term.

“He came from one of the better schools … They knew he was going to speak good English and drop that accent. He didn’t have an accent – the Mexican accent,” Lerma Rodriguez said.

She stressed the importance of learning English, saying people should keep their first language by practicing it, but should also be fluent in English.

“Don’t be a Mexican all your life,” Lerma Rodriguez recalled her father, Ramon Lerma, saying.

Mexicans were seen as lazy, because many did not finish high school. Having moved from his hometown of Durango, Mexico, to Texas at a young age, her father felt Americanized, she said.

Yet, Ramon felt he was a man without a country, said Lerma Rodriguez, becoming teary-eyed. He had no papers and wanted very much to become a U.S. citizen.

“He couldn’t claim Mexico as his country, because he knew very little about Mexico,” she said.

“I love him. When he would kiss me, it was different,” she said. “He made me feel good.”

Lerma Rodriguez had her first child, Gilbert, in 1961 and her daughter, Alicia, was born seven years later., Alicia Sachen was born.

A computer programmer, Gilbert graduated with a master’s degree from a school in Claremont, Calif., in 1988. Alicia attended the University of Texas in El Paso and is a teacher’s assistant.

(Gloria Lerma Rodriguez was interviewed in Austin, Texas, on Nov. 27, 2009, by her daughter-in-law, Maggie Rivas-Rodriguez)