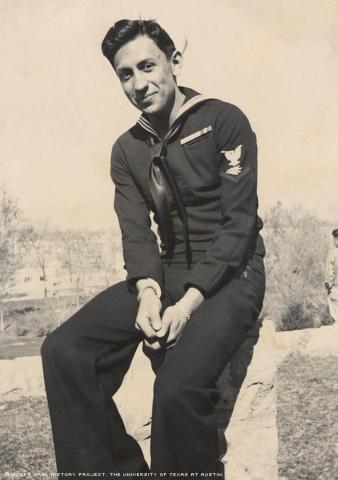 Gilbert Sanchez not only survived the Pacific typhoon of 1944 that capsized three U.S. Navy destroyers and killed 790 people, he also witnessed the largest aircraft carrier skirmish in the Pacific during the Battle of the Philippines Sea that same year.

Serving as a Navy radioman aboard the USS Macdonough, Sanchez took part in nine military offensives across the Pacific. He also witnessed the sinking of a Japanese submarine near New Guinea in April 1944 and the shelling of enemy troops in January of that year on Parry Island, in the Marshall Islands.

But instead of violent war stories, he chose to recall the friendships - bonds created and jokes shared -- during his time at sea.

Sanchez grew up in Albuquerque, New Mexico, and joined the Navy at 17, before completing his senior year at Albuquerque High School. He said that his service on the ship, crewmates and war experiences had helped him grow up.

"I did things on my own," said Sanchez of his years in the Navy. "I didn't have my parents over me, and I learned to be on my own."

Sanchez grew up in a middle class, bilingual home. His mother, Herlinda Chavez Sanchez, was originally from New Mexico, and his father, Pablo Santiago Sanchez, was from Colorado. Santiago Sanchez had served in the U.S. Army in France during WWI and later worked as a printer.

The younger Sanchez followed in his father's footsteps, volunteering for the military.

"My main objective [in signing up] was not to have a foreign country invade the U.S.A.," wrote Sanchez in a letter after his interview. "Enlisting kept me from being drafted. I knew that they didn't draft you into the Navy, so I enlisted."

Enlisting also was a way for Sanchez to leave home and see the world. As he stood on the deck of the Macdonough while departing San Francisco Bay en route to the Pacific theater in July1943, he realized his life was changing. The ship that was to serve as his home for the next several years was a Farragut T-Class destroyer, which was equipped to attack enemy aircraft and submarines, as well as acting as an escort for larger ships.

"We were going under the Golden Gate Bridge, and I just thought, 'What did I get myself into? Where am I going?' " Sanchez recalled.

But there was an underlying excitement.

Sanchez quickly adapted to life aboard ship. There were frightening moments, including the Dec. 18, 1944, typhoon that had winds of 58 mph to 86 mph with gusts up to 138 mph. Three destroyers, the USS Monaghan, USS Hull and USS Spence, capsized in the storm. According to the Destroyer Escort Sailors Association and the Naval Historical Center, 790 people were lost or killed.

"During the typhoon, we lost [three] of our sister ships," Sanchez said. "We went through it. We survived but, boy, it was scary."

Sanchez spent his working hours deciphering and transcribing messages transmitted in Morse code. He trained in radio-communications for the Navy at the University of Colorado in Boulder. His code work gave him access to a radio, which he shared with everyone by turning on all of the ship's speakers and playing Big Band music. One of Sanchez's close friends, Fred Dimas, worked in the kitchen, which had no sound system. But by removing a bolt in the ship's deck, Sanchez lowered a wire into the kitchen, which was under the radio room and hooked up a speaker. In return, Dimas brought Sanchez and the other radiomen warm snacks during the midnight-to-4 a.m. shift. This made the night shift extremely popular.

When off the clock, Sanchez enjoyed wandering around the ship, drinking coffee and talking with the torpedo men and others. He also liked spending time reading a good novel, and corresponding with Barbara Padilla, a young woman who lived across the street from his family.

The two faithfully wrote each other during his time away. After the war, they dated, eventually marrying and having four children: Beverly, Barbara, James and Anna Marie.

He was discharged on Jan. 29, 1946, at the rank of radioman third class, having earned nine battle stars.

Sanchez faced new responsibilities and opportunities upon re-entering civilian life. He went into the same line of work as his father, as a printer pressman, first with Valiant Printing Co., then with the University of New Mexico. He later dabbled in politics, running unsuccessfully for county commissioner and clerk in Bernalillo County, New Mexico.

Time, however, never weakened Sanchez's loyalty toward his shipmates and military friends. He even hosted a reunion for members of his fleet.

Mr. Sanchez was interviewed by his daughter, Beverly Sanchez-Padilla, in Albuquerque, New Mexico on Aug. 2, 2002.