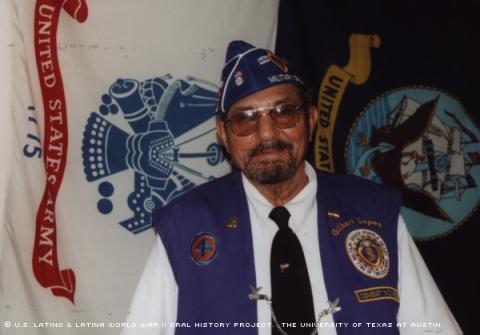 During the Depression years, Lopez remembers growing up in poverty and attending Irwindale School without shoes. As a small boy, official segregation forced Latinos to sit in separate sections of public buildings, such as movie theaters.

"I don't have any grudges over anybody. You learn in life to get along with everyone," Lopez said.

As the oldest boy in the family, he only completed the eighth grade because he stopped going to school in order to help his dad provide for the family. At age 17, Lopez joined the Civilian Conservation Corps (CCC), created by President Roosevelt to provide jobs. His parents received $25 per month for his participation.

At age 21, Lopez married Jennie Padilla on March 17, 1941, in Las Vegas, Nev. He attended welding school, worked in construction and performed agricultural jobs on the side. The two had two children by the time Lopez was drafted and entered the service in April of 1944.

Lopez received basic training at Camp Robertson in Arkansas. He remembers the exhausting long marches from the camp and back everyday. Mexican Americans from California and Texas were among the soldiers and encouraged each other to succeed.

When he traveled through Amarillo, Texas, Lopez experienced harsh discrimination. He read a sign in front of a store that read: "No Mexicans or dogs allowed."

And he remembers asking himself: "Is this what I am going over there giving up my life for and die for these kind of people?

"But then I thought, 'Well, all these people are not bad, there are good people,'" he said.

While in basic training, Lopez had other problems to worry about. Mainly, his young daughter, Susan, became seriously ill. He received permission to return home and the soldiers he trained with left to do battle in Normandy. When Lopez landed in France in 1944, he was assigned to the 114 Infantry Regiment, 44th Infantry Division. They fought and crossed into Frankfurt, Germany, and Austria. His main positions included handling a rifle and carrying ammunition.

Lopez was wounded by one of his own men in Austria, four days before the war ended. As Lopez and his sergeant walked back to a foxhole, they didn’t hear a soldier ask for the password. The men in the foxhole shot Lopez in his left leg near his thigh. Fortunately, an ambulance took the young private to a hospital; his sergeant wrote a letter to make sure he received the Purple Heart.

While hospitalized in Birmingham, Wash., Lopez was surprised to be reunited with his brother, Roger, who was also wounded and suffered from a concussion.

Lopez made a full recovery.

Lopez was discharged from the Army in 1946 at Fort Lewis, Wash.

While in Birmingham, his uncle gave him a piece of land on which to build his own house in Irwindale, Calif. Everyone in the family pitched in and helped him construct a home. Today, it is the main gathering place for his family.

"I have a very loving family that's not afraid to say the word love to each other," Lopez said.

After the war, he used his GI Bill of Rights to enroll in shoe-repairing school. After a while, he transferred to welding school, but didn’t receive his certificate after losing part of his sight in his left eye. Lopez mainly worked in construction throughout his life.

"I'm happy,'' Lopez said. "I know I went through suffering, but it was worth it. It made me appreciate life."

Lopez offers this advice: "Live right, respect people and use that word love. If you love each other, there won't be no problems. Respect people, live and let live."

Mr. Lopez was interviewed in Los Angeles, California, on August 28, 2002, by Jack Steingart.