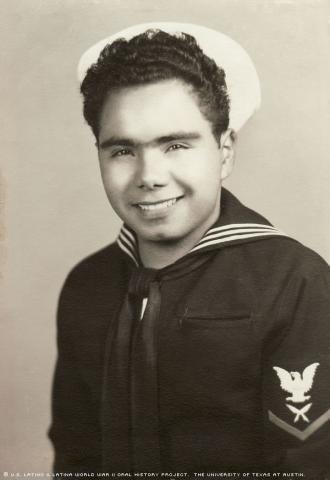 Frank Yturralde’s life is interwoven with the threads of family and education.

At times they clashed, at times they co-existed, but mostly they were symbiotic -- family feeding education, education feeding family.

Yturralde grew up in a bilingual household in El Paso, Texas, where the importance of learning both English and Spanish was stressed. His mother was born in the U.S. and didn’t speak Spanish, while his Mexican-born father spoke both Spanish and English.

The importance of learning languages was instilled in Yturralde at an early age.

“The more languages you know, the better off you are,” he said.

Along with English and Spanish, Yturralde’s father taught him about honesty and good morals. For example, Yturralde says if he came home with a bicycle and wouldn’t tell his father where he got it, his father would throw it in the trash and chase him around with a belt.

“Of course, he never caught me,” Yturralde said.

As a child, Yturralde would go to the baseball diamond a block from his home to play a game, free dogs from the pound or swim in the Canal, a branch of the Rio Grande.

“Nothing too mischievous, but there was not too much to do at the end of the Depression,” he said.

William Spiller was Yturralde’s best friend; they would swim in the canal and walk to school together. Yturralde says he noticed discrimination against William, who was black, but didn’t understand why William was treated differently from himself.

His childhood was a balance of exposure and protection by his mother and father, but his time in school taught him that not everyone was brought up like him. For example Yturralde recalls being in elementary school and not being able to talk in class.

“I wondered why they didn’t want us to express our opinions,” he said.

High school also gave Yturralde a different view of the world from the one he’d experienced within the confines of his family life. When he would walk to school with Spiller, his friend would have to stop at Douglass School, which was only for African Americans, while Yturralde went on to Bowie High School, a mostly Latino school.

Yturralde was drafted into the Navy when he was 19 years old, after he graduated from high school, but before he could receive his diploma. His parents held it for him until he returned from the war.

During World War II, Yturralde became a Yeoman Third Class in the Navy, using his bilingual education on at least one occasion to help out allies in the Mexican military: At one point, he was called up on the deck of his ship to translate orders to a plane from Mexico’s 201st Fighter Squadron that needed to land. (Escuadrón 201’s members flew 59 missions from Porac and Clark Fields on the Philippine island of Luzon.) Becoming a momentary hero to these men reinforced the importance of education for him, Yturralde says.

Although Yturralde says the number of Latinos and African Americans drafted into the war was disproportionate to the number of whites, he was still honored to be serving his country.

“We were proud to serve in the service. We thought it was an obligation,” he said. “We never thought we shouldn’t be serving.”

Yturralde adds that he didn’t think of himself as a Mexican, but an American, and that it was his obligation to serve his country when it called.

When Yturralde was discharged from the Navy on May 28, 1946, he had a family to support; however, he could only find menial labor. He says he worked for a while moving 300-pound blocks of ice into boxcars, but couldn’t support his growing family on 50 cents an hour. So he decided he would go back to school and get a college degree in order to support his family better, thus intertwining the welfare of his family with his education.

Yturralde became a teacher after he got his degree in accounting from the Texas State School of Mines and Metallurgy, now The University of Texas at El Paso. Before becoming a teacher, he worked as an accountant for the government, but realized he wouldn’t be promoted quickly, if at all, so he quit. When he could only find part-time work at the post office, he started submitting teaching applications in 1954.

Yturralde got a lot of teaching job offers in California, but his wife didn’t like the state and the family moved back to Texas. Since becoming a teacher, he says he has taught every level of school through junior high, as well as almost every subject.

Today, Yturralde still teaches, offering English as a Second Language, GED and citizenship classes to adults. As he put it, “I cannot lie around. I have to keep busy.”

“I think that in America you have all the opportunity in the world to do well, but you’ve got to be prepared for it, too,” Yturralde said. “A lot of our parents were not very aware of the situation – like my parents were – that education was the key to success.”

Despite all that he has learned in life, his advice to the young remains tied to the values of his parents.

“Get a sound education and continue. Don’t get discouraged,” Yturralde said. “Education is the answer to your future -- education is it.”

Mr. Yturralde was interviewed in El Paso, Texas, on September 1, 2007, by Joseph Villescas.