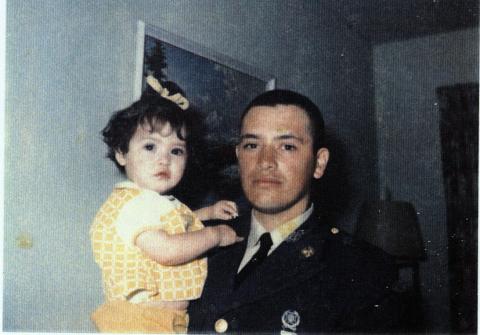 Frank Martinez, a Colorado native, was a family man and a college student in the mid-1960s. Surely, he wouldn’t be sent to Vietnam.

But then he got the letter from the Army.

“I didn’t think I would get drafted because I had a daughter,” Martinez said. “I told this other Hispanic guy I knew, Joe Castro, ‘There’s no way they’re going to draft you. You’ve got a little boy!’ But then we both got drafted.”

Martinez and Castro used their friendship to prepare for the war.

“We went into training on the buddy system. Hispanics are tight-knit, and I think we needed each other,” Martinez said.

After basic training, Martinez started advanced training in February 1969 at Fort Lewis, Washington, where he learned infantry skills. After training and a 21-day leave to spend time with his family, Martinez was deployed to Vietnam.

“We felt honored to be serving our country, but everyone hoped they wouldn’t be sent to Vietnam,” Martinez said. “This was the first time in my life that I knew something about belonging. The worst part was the detachment from my wife and my child, and not knowing what was going to happen or if I would come back.”

Martinez landed in Vietnam on July 7, 1969. Six other soldiers landed with Martinez: one African-American and five white men. After the first 10 days, squad leaders were able to pick their soldiers. Martinez was eventually assigned to the 196th Americal Division, but only after the squad leaders vied for him. He was the soldier most in demand.

“They were saying, ‘Listen, I need this guy,’ talking about me and I started to think that everybody wanted me,” Martinez said. “I thought, ‘I’m looked at as one of the treasures here.’ It made me wonder why they wanted me here, but not in the United States.”

Then Martinez found out why he was the most valuable.

“I was told that Hispanics and blacks would fight together until the end, because we had been fighting in the U.S. all our lives. White guys were more likely to have a nervous breakdown or run because they didn’t know what fighting meant. Minorities have been fighting all their lives.”

The early days in Vietnam were easy for Martinez.

“I was feeling bad when I first arrived because my mother and wife were writing letters being all upset, but everything with me was pretty much a ball,” Martinez said. “We would watch movies, buy beer, and go out and run into the sea. It was like a resort. But after a while, we started wondering when we would get to see the action.”

“Vietnam was shocking for people who had never seen death,” Martinez said. “Some people would ask each other if they knew if they had killed anyone (in Vietnam). I know I have. Maybe I didn’t think so much about it until I got home, but I still have a lot of turbulence in my head about it.”

“I’m Catholic and I always knew the Commandments," he said. "Thou shall not kill. But in Vietnam, it was ‘Thou shall stay alive or thou shall come back.’ That’s the only thing I was thinking of. When I came home, I had a big conflict with religion and with life itself.”

“My close friend, Thomas Guy, was hit in the chest with shrapnel, causing him to die in my arms,” Martinez said. “What a waste of a decent human being. Our squad was crushed.”

Martinez was injured in a rocket-propelled grenade attack on Sept. 11, 1969, and nearly lost his eyesight.

“We got hit and everyone was running to the nearest foxhole,” Martinez said. “I jumped into the closest one, but I was laying on top of other people. I could hear everybody, ‘Get me out of here.’ I woke up in a Japanese hospital three days later.”

Martinez’s left eye had metal debris from the rocket and his retina was damaged. He stayed in Japan for almost four months.

“One day, I was laying in bed waiting until they changed my wraps,” Martinez said. “They were going to take my pulse, but (someone’s) hand was moving up my arm. The guy starts crying, ‘Panch, how are things?’ It’s my brother. My family sent my brother, Richard, all the way to Japan.”

Martinez knew that coming up with the plane fare must have been difficult for his family. He said he would cherish such a gift forever.

“I got convalescent leave for nine months,” Martinez said.

Over the next two years, Martinez had three retina operations and was told not to run or walk fast to protect his eye.

“When I was in Japan waiting to go home, I started thinking that I didn’t care how I got home, as long as I got there,” Martinez said. “God answered my prayer.”

He spent time at the Western Blind Rehabilitation Center in Menlo Park, California, reflecting on his injuries and how to overcome his experiences in the war.

“I killed people,” he said. “All veterans have to live with that. But if I had never gone to (rehab), I would be just another statistic. I probably would have committed suicide. They showed me things I could do.”

After earning a bachelor’s degree in elementary education and a master’s in counseling from the University of Northern Colorado, Martinez became a teacher.

“In 1984, I was teaching at Chappelow Middle School, and one day I felt this big ball in my throat,” Martinez said. “I find out I have lymphoma cancer. I’m living with this crisis in my life. But you have to keep your faith and not let cancer run your life.”

Martinez was tested for effects of Agent Orange, a toxic herbicide that the U.S. had used in Vietnam.

“There were a lot of wounds where debris that had dioxins on it could have gotten in my bloodstream,” he said. “I ended up with cancer from Agent Orange 14 years after I was wounded. I’m still fighting the war.”

After a 12-year battle with cancer, Martinez died in November of 1996.

Mr. Martinez was interviewed by Rea Ann Trotter in Greeley, Colorado, on Jan. 1, 1994.