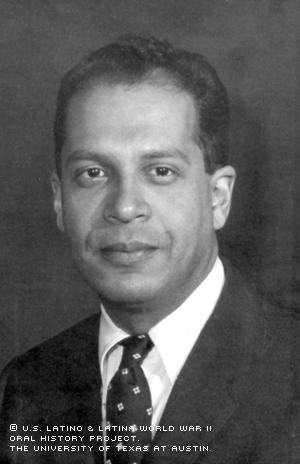 Frank Bonilla planned to attend college after finishing high school, but within two weeks of graduation, he was drafted into the Army to fight in World War II.

After his experiences in Europe, including action in the Battle of the Bulge, Bonilla returned from military service more determined than ever to gain a college degree. He began a pursuit of academic excellence that has served him his entire life, holding faculty appointments at the Massachusetts Institute of Technology, Stanford University and the City University of New York, among other accomplishments.

Born in New York City in 1925, Bonilla grew up in East Harlem, a community populated by a wide assortment of ethnic groups and cultures. He says it wasn’t unusual for children to speak a second language in the neighborhood.

"We had very good teachers," said Bonilla, "but they were also in many ways racist."

His mother had graduated from high school in Ponce, Puerto Rico, and then immigrated to the United States in hopes of attending college. His father had been a cigar maker in Puerto Rico and served with the U.S. Cavalry during World War I, later becoming a paraplegic from a service-related injury. They met on the boat that brought them to America.

In 1943, Bonilla graduated from Morris High School in New York City’s South Bronx, and was soon drafted. He had no reservations about getting called up; he says he believed the U.S. was on the right side in the war and it was his duty to serve.

Prior to graduating from Morris, where he spent his junior and senior years, Bonilla attended a Franciscan high school in Illinois, where he was elected president of his class. There, he took courses in classical Greek and Latin, as well as Spanish, French and German.

Because of his strong academic background, Bonilla was assigned to one of the Army's training units, a weapons platoon. He was trained as a mortar gunner and assigned to the 290th Infantry, which later fought at the Battle of the Bulge. He was on the front lines for a month during this major battle.

In the course of this campaign, Bonilla sustained an injury and had to be moved to a hospital in Paris. After being hospitalized for three weeks, he was reassigned to a replacement depot in France.

While at the depot, Bonilla was invited to join the 65th Infantry Division, a Puerto Rican unit based near Frankfurt, Germany. He says he was delighted to join and designated a company clerk.

Once he joined, however, he discovered a divide among the soldiers. The Puerto Ricans who’d immigrated to the mainland were seen as "American Joes." Puerto Ricans from the island considered themselves "pure" Puerto Ricans, Bonilla says.

"We were American GI Joes to them and not Puerto Ricans," Bonilla said.

He recalls the Puerto Rican soldiers paid little if any attention to the playing of the "Star Spangled Banner." He at first thought these soldiers were being disrespectful, especially since they stood at attention whenever La Borinqueña, the Puerto Rican anthem, was played.

"The soldiers in the regiment, although proud to be U.S. citizens, felt that they were a Puerto Rican army, not a U.S. army," Bonilla said. "These men had a select unit pride because they had had more time overseas and in combat areas than the American units."

In December of 1945, the 65th was recalled to Puerto Rico, where it received a tremendous welcome on arrival. In fact, according to Bonilla, the ship carrying the Puerto Rican troops had to anchor at sea for an extra night so the organizers could complete the welcoming reception.

Subsequently, Bonilla was transferred to Fort Dix, N.J., where he was discharged from military service. He received many medals, including a Bronze Star.

"The military experience helped to consolidate my sense of being Puerto Rican and also a sense of wanting to study and be a scholar," Bonilla said.

Soon after his return to New York City, Bonilla took advantage of the GI Bill of Rights and enrolled in the College of the City of New York, where he graduated in 1949 with a B.B.A. cum laude. He went on to become a research assistant at the Bureau of Applied Social Research at Columbia University, a position that was funded by International Public Opinion Research, a private entity that contracted to conduct academic and commercial research. While working for IPOR, Bonilla began extensive travels throughout Central and South America, as well as pursued an M.A. in Sociology at New York University, which he earned in 1954.

He received a John Hay Whitney Fellowship in 1954, to begin study at Harvard University in the Department of Social Relations, and a Doherty Foundation Fellowship in 1956, to complete his studies there. He earned a Ph.D. in Sociology in 1959.

Upon his return to New York, Bonilla and other young social activists formed the Puerto Rican Hispanic Leadership Forum -- and, later, Aspira -- to respond more effectively to the needs of Puerto Ricans in New York.

In 1960, Bonilla joined the American Universities Field Staff to collaborate on a research program carried out on behalf of the United Nations Educational, Scientific and Cultural Organization (UNESCO) and the Economic Commission for Latin America, conducting surveys in Argentina, Chile, Mexico and Brazil. A year later, he became a regular Field Staff associate in Brazil, filing reports on social, economic and political events and following up with lecture tours of the seven U.S. academic campuses that belonged to AUFS.

Bonilla joined the Political Science Department at the Massachusetts Institute of Technology as an associate professor in 1963, serving concurrently as a senior staff member at the Center for International Studies, also at MIT. During this period (1963-67), he carried out an extensive program of research into Venezuelan politics in collaboration with the Center for Development Studies of the Central University of Venezuela. He was appointed Full Professor in 1969.

That same year, Bonilla was also a social science program adviser to the Ford Foundation, and a resident of Brazil (1968-1970), as Visiting Professor in Political Science at the Universidade Federal de Minais Gerais.

From 1969-1972, he was a professor of political science at Stanford University and a senior associate at the Institute of Political Studies.

In 1973, he joined City University of New York as a graduate political science professor and Director of the Center for Puerto Rican Studies, an institution he was instrumental in forming. He was appointed a graduate sociology professor at CUNY in 1977, and Thomas Hunter Professor of Sociology at Hunter College in 1986, where the Center for Puerto Rican Studies (Centro de Estudios Puertoriqueños) now makes its home.

Although Bonilla stepped down as director of the center in 1993, he continued to help coordinate the Inter-University Program for Latino Research, a national consortium of 10 university-based research centers that focus on Latino concerns.

Mr. Bonilla was interviewed in San Diego, California, on September 5, 2001, by Mario Barrera.