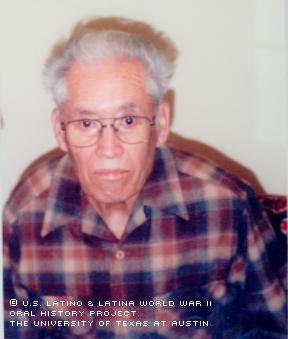 It was Frank Resendez's first night in New Guinea in November of 1943 and his company had carelessly left on the residential lights. A mistake that could have cost them their lives, as the rumbling and reverberating of detonating war bombs thundered throughout the night sky.

Luckily, however, the company was spared.

Born Francisco Rodriguez Resendez on Jan. 29, 1920, he lived in Texas until he was 9 months old.

According to a letter written to the Project after his initial interview, Resendez's mother took him to Mexico when she was ill with pneumonia, and died when he was nine months old. Resendez lived in Aramberri, Mexico, in the state of Nuevo Leon, with his maternal grandmother, Leonides Liscan Rodriguez, until her death in the early 1930s. Jacinto Rodriguez, his late mother's uncle, raised him until 1938.

Growing up, Resendez didn’t attend school; instead, he spent his days caring for the homestead, plowing land with an oxen-driven plow and tending to other farm animals. He also acquired the traditional Mexican nickname of "Pancho."

During this time, Resendez's father and brothers moved to Austin, Texas, where his father met Lupe, who later became his bride and the mother of two more children, Manuela and Ignacio, Jr.

In September of 1938, 18-year-old Resendez left Mexico to return to his family in Texas. As a Mexican American growing up in Mexico, Resendez wasn’t forced to confront discrimination; however, moving back to Texas, where the Latino population was considerably smaller than it is today, he encountered hostility toward his group among Anglo Texans.

"We wouldn't be allowed in theaters to see movies," said Resendez, adding that he also met discriminatory sentiments at the plant he worked at in Freeport, Texas.

By September of 1939, the Nazis had taken Czechoslovakia and invaded Poland, and Britain, France, Australia and New Zealand had declared war on Germany.

Throughout this time, the United States maintained neutrality, but with the brutal Japanese attacks on Pearl Harbor and the Philippines in December of 1941, the U.S. entered the war, thereby greatly altering the balance of power in favor of the Allies.

Resendez, who was one of almost 12 million Americans to serve in WWII, was initially stationed at Camp Walters, Texas, the site of his Nov. 20, 1942, induction. He was later moved to St. Petersburg, Fla., for basic training; he then traveled to Richmond, Va., Bangor, Maine, and, finally, to San Francisco.

From there, he was shipped out to New Guinea, located in the South Pacific, where he was assigned kitchen patrol duty in the 93rd Division Engineers of the Aviation Battalion. His duties included washing plates and delivering food to the servicemen who were constructing landing strips on the island.

Kangaroo was the main meat they served, as there was a shortage of normal commodities due to war rationing. It was a smell "you can recognize" anywhere, Resendez mused. Despite it being a primary means of nutrition, most servicemen declined, much to the delight of the many natives, who gladly accepted the discarded provisions.

Coffee was served in large trashcans, and it never tasted as good as the coffee from home, no matter the variations, he said.

Working "one day on, one day off," as he put it, Resendez went walking on the trails throughout the island; however, the lush jungle discouraged the men from wandering too far, for fear of getting lost and not being found.

Resendez remembered an instance in which he and a friend went walking around the island one day. As they approached another serviceman to inquire where the front line was, they were promptly informed, "You're on it!"

Japan's entry into WWII in June of 1940 turned the war into a global conflict. As Japan prepared to expand its empire into Southeast Asia and the Solomon Islands, it sought to establish a defensive perimeter around the Southern Pacific, including New Guinea. Fortified bases constructed on the chosen islands would protect against the U.S. and other Allies.

Sleeping four to a tent on the hard ground, Resendez remembers feeling lonely when the war began, but recalls that he "got along alright" with the other men in his division, mainly because they were all soldiers united by the unnatural primitiveness of war.

Speaking Spanish all his life, Resendez began to learn English during his time in New Guinea. He listened to music and the daily news on the radio and sometimes leafed through magazines. The language barrier caused for some confusion, but normally he understood after someone repeated what he or she had said.

In Europe, the war was over after Germany surrendered on May 7, 1945. But in the Pacific Theatre, the conflict continued.

Finally, in mid-August of 1945, the dropping of two atomic bombs on the Japanese cities of Nagasaki and Hiroshima forced Japan to surrender.

The war was finally over, and almost three years after enlisting, Resendez was discharged and sent home.

Upon returning to Austin, he first visited Our Lady of Guadalupe church to pray. Then, when he arrived at his house, his stepmother cried out, "He's home! He's home!"

Later, two of his other brothers returned from the war. The oldest brother, Rudolph, who’d been in the 36th Division in Belgium, was killed in service at the age of 24. Resendez didn’t hear of Rudolph's death until he returned home.

In the Navy, Ignacio Jr. had been stationed on a Coral Sea ship in the south pacific; Edward had survived frostbite in the Aleutian Islands off the coast of Alaska.

After the war, Resendez was honored with a Good Conduct Medal and later met Mary Carmona, whom he married Jan. 3, 1949. The couple has three children, Rodolpho, Mary Frances and Gerardo, as well as two grandchildren from Rodolpho and his wife Maria.

Mary Resendez remembers post-war with Resendez as "happy times," as Resendez and his friends got together often. He held odd jobs after the war, often working on construction sites; from 1949 to 1969, he worked as a welder.

Resendez's sister and other brothers have since passed away. Manuela died from cancer in 1974 after earning a degree from the University of Texas at Austin and teaching in Edinburg, Texas; Edward, who suffered from Alzheimer's and Cerebral Palsy, died in Austin in 1993; Ignacio Jr. died from complications with diabetes on Memorial Day of 1993.

They consider the time they spend together now their honeymoon, since they never took one following their wedding.

Mr. Resendez was interviewed in Austin, Texas, on March 28, 2001, by Katherine Hearty.