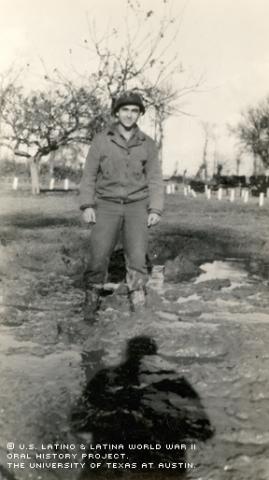 Francisco Guerra still doesn't understand why people had to kill each other during World War II. And he says he doesn’t believe in wars anymore.

One memory vividly sticks with him to this day -- the day a fellow soldier was struck by German machine-gun fire.

"A bullet separated a finger from his hand, except for a piece of skin. His wedding ring was dangling loose from the skin," Guerra said.

Guerra was serving as part of the 74th Ordnance MM battalion, a support unit during the D-Day invasion. His unit was assigned to the 6th Engineer Special Brigade. Their duties at Normandy were to stay on the beach, supporting and supplying incoming forces.

It was Guerra's first and only battle in close combat while he was in the Army.

The Allied invasion of Europe through Normandy began June 6, 1944. Operation Overlord, as it was known, had been in the making since 1943.

Guerra's unit landed on Omaha Beach between June 6 and June 8. By early morning on June 8, the entire battalion had finally landed and regrouped, even though the beach was still not secure and gunfire from enemy snipers continued.

"It was like a little hell, all this chaos going on," Guerra said. "You see the faces of the GIs. Everybody's like, scared."

Guerra says he wasn’t wounded, nor did he ever have to fire his rifle, thanks to the infantry that protected the service unit during the invasion.

"When there was a sniper, (the infantry) used to holler 'sniper, sniper,' and then the infantry would go after them," Guerra said. "The infantry was all around us."

Once the Allied forces secured the beach, Guerra's unit began carrying out its assignment -- cleaning up the beach, picking up ammunition and maintaining abandoned vehicles and small arms.

He recalls being hungry for fresh eggs and bacon while in battlefield situations. Instead, the menu consisted of K-rations -- concentrated cheese, Spam and chocolate.

Francisco Guerra was born Dec. 5, 1918, in Nuevo Laredo, Tamaulipas, Mexico, to Refugio and Josefina Buentello Guerra. His father died when he was 3, and the family moved across the Rio Grande to Laredo.

For a time, Guerra's mother ran a corner grocery store in Laredo. Life during the Great Depression wasn’t easy for the family, he says. When he was 6, Guerra started contributing to the family and paying school expenses by shining shoes and selling newspapers. His siblings did likewise.

When Japanese planes bombed Pearl Harbor in December of 1941, Guerra was at work in a Mexican forwarding office in Laredo. News of the attack coming over the radio spurred the 23-year-old's patriotism, and he volunteered for the U.S. Army.

Because Guerra was a Mexican citizen, he was unable to participate immediately in the war effort. He became a U.S. citizen in 1942 in Washington State, where he received basic training before being shipped to England.

"They wouldn't accept Mexicans as volunteers, not even for the Home Guard," he said. "When the war got tough, then they drafted anyone who was a resident in the United States."

That included his brother, Luis B. Guerra, who was killed in action on Los Negros Island in the Southwest Pacific while with the 5th Regiment of the 1st Cavalry Division.

"He made the ultimate sacrifice," Guerra said.

Soon after the Normandy invasion, the 74th Ordnance Battalion was awarded the French Croix de Guerre Medal with Palm by the French provisional government "for exceptional wartime services rendered during the operations in the liberation of France."

Some 50 years later, Guerra and other D-Day veterans were awarded the Jubilee Liberty Medal from the people of France's Normandy region.

Guerra also earned medals for his performance in two other European campaigns, including four bronze stars and a bronze arrowhead.

He was on duty in Kassel, Germany, when he heard an atomic bomb had been dropped on Japan. He says he and the other soldiers were surprised the bomb could be so destructive.

The 74th Ordnance Battalion was finally discharged in December of 1945. Guerra returned to Laredo.

He studied at Trinity University, then graduated from St. Mary's University in San Antonio in 1949. Guerra started a career with the Internal Revenue Service.

He says he faced some degree of discrimination in the workforce after the war, but he rose through the ranks of the IRS to become a deputy collector, and then agent in the audit division in Austin from 1950 to 1976. He also served as a senior Internal Revenue agent for 18 years in the Laredo office. Guerra retired after working for the IRS for 30 years, including credit for his military service.

Guerra met his wife, Carmen, in 1948. They married later that year. They have three sons and three daughters. Two of their sons are also veterans -- one Navy and the other Army -- of the Vietnam War.

He says he still has dreams about his experience at Normandy.

"Very often I dream that I am driving a 21/2-ton Army truck with defective brakes in deeps valleys, hills and winding dirt roads. Suddenly I wake up just as I am about to crash," he said.

Guerra says the college education he received helped him be successful with the IRS, and he’s hopeful the next generation of the U.S. military takes their education seriously.

"My advice to all veterans and others is education. That's why I had a good job," Guerra said. "Work hard, go to school [and] get your degree."

Guerra says he never regretted joining the Army. "Certainly not! I became more experienced and a better person. I was granted United States citizenship by only raising my right hand at Tacoma, Wash., U.S. District Court together with 300 or so other soldiers in Army uniform who took the oath.

"Furthermore, for being in the Army, I took the opportunity at continuing my education under the GI Bill of Rights and earn a university degree, which otherwise I would not have been able to do," Guerra said.