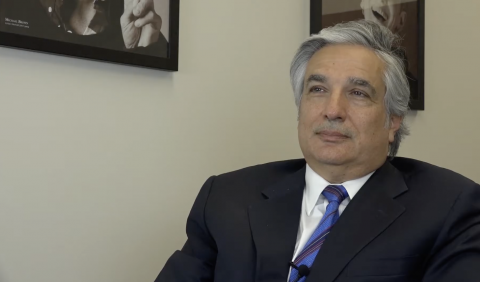 “Being aware of that the border region was an underserved area, I understood that to get educated was an important value to then be able to give back,” Cigarroa said.

Cigarroas’s father, Joaquin Cigarroa, and his uncle, Leonidas Gonzalez Cigarroa, were strong role models: Both of them were devoted to improving public education in Laredo, and to bringing in a community college and a university.

Cigarroa was forced to leave the border region to attend college as there was no bachelor degree-granting institution on the Texas/Mexico border. Cigarroa earned an undergraduate degree in biology from Yale in 1979. In 1983, he received his medical degree from the University of Texas Southwestern Medical Center at Dallas. He did postgraduate training in general surgery at Massachusetts General Hospital in Boston and fellowships in pediatric surgery and transplantation surgery at Johns Hopkins Hospital in Baltimore. He and his family moved back home to Texas, and he joined the faculty of the University of Texas Health Science Center at San Antonio in 1995. From 2000 to 2009, he served as the institution’s president.

Cigarroa and his wife, Graciela, have two daughters, Maria Cristina and Barbara Carisa.