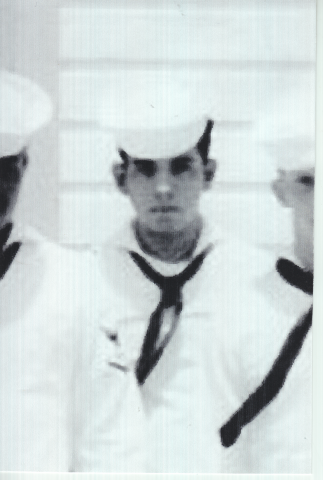 During the Korean War, Francisco Ríos Padilla, a high school dropout, was determined to leave Denver, Colorado. One day, he walked past a Coast Guard recruiting station on 15th Street. He went in and enlisted on March 10, 1950.

“I didn’t tell anybody,” Ríos Padilla said. “They sent me to Cape May, New Jersey. I jumped at the chance to get out of Denver.”

The Coast Guard was an opportunity for a young man who had few others in life. During his seven years in the aviation wing of the service, he got a chance to see the world, and later, to go to college on the G.I. Bill.

Ríos Padilla was born Sept. 15, 1932, in Denver. He said he has only "dim" memories of his childhood on Denver's East Side. He remembers helping his mother, Virginia Ríos Padilla, make the masa for tortillas. But he has only faint memories of his father, Pracedes Ríos, who was from Brownsville, Texas. "He was never around," he said.

He doesn't know what his father did for a living. "My mother's job was raising five kids during the Depression, by herself," he said.

The family survived on Aid to Dependent Children, a welfare program that included some free food. "We were always looking for cheaper rent," he said.

He was 12 when his mother died in 1944. The children were separated: Francisco and his brother Patrick and half-brother David stayed in Denver and moved in with the widow of his oldest brother, Paxie. Their sister, Precelia, went to California. He said he's not sure where his brother Richard went.

It would be decades before he would see his siblings again. When they finally met, it was not a typical family reunion; they had no childhood memories to share because they had been separated.

Ríos Padilla liked school but also started working at age 12. He didn't last long at his first job, picking beans, but had more luck at his next try. He lied about his age and was 13 when he was hired at a restaurant called The Blue Parrot Inn.

“They made me the vegetable boy. I fixed dishes but didn’t cook. I worked there for three years. … It was hard work, but I learned how to work fast and how to work clean.” The owners gave him increasing responsibility for helping to run the kitchen.

Ríos Padilla attended mostly public schools but also spent a year at a school run by the Dutch Reformed Church, which offered him free tuition. He was the only Latino and sometimes didn't have lunch money. "I still enjoyed the school, and I learned a lot."

He said that by eighth grade, he was ahead of other students, especially in math. Because school officials didn't expect that Latinos would go to college, he was sent to Manual Training High School, which offered vocational classes such as welding and woodwork.

He quit after the 11th grade, bored by the lack of challenge. That's when he came across the Coast Guard recruiting station. He enlisted just a few months before the fighting started in Korea.

"I got my few things together and got on a train" for the Coast Guard training center in New Jersey. At radio school in Groton, Connecticut, the Guard employed a unique method to teach Morse code. "They would broadcast dirty stories over the air, and you'd have headphones on and try to figure out who did what to who," he said. "That's the way they encouraged people to learn Morse code."

He served for a year on the cutter Bering Strait, which patrolled parts of the Pacific as part of the postwar occupation force. He recalled one Christmas when the owner of a small plane flew overhead and dropped presents so the crew could enjoy the holiday.

"That's when I knew what I wanted to do," Ríos Padilla said.

He was trained as an aviation radio man and served as a turret gunner during the Korean conflict and later did air-sea rescues.

"I enjoyed flying; they couldn't keep me out of planes," he said. During the war, he was assigned to the Air Detachment at Barbers Point, on the Hawaiian island of Oahu.

At the time, it took a week for Coast Guard planes to fly from the U.S. to various parts of the Pacific, one leg at a time. He traveled to Japan, Hong Kong, Guam, Yap, Iwo Jima and the Philippines, "all across that area,"

After the war, he was assigned to the Coast Guard Air Detachment at Keesler Air Force Base in Biloxi, Mississippi, doing air-sea rescues.

The work could be dangerous but rewarding. He recalled picking up a very sick baby and a nurse in northern Alaska. The plane didn't have the equipment to fly in the dark, but the pilot got them to safety. During another rescue in the Gulf of Mexico, rough seas tossed the seaplane around, but the mission was successful.

He had planned to make a career of the Coast Guard but left the service after seven years; he had made one too many flights across the Pacific with pilots who were hungover and decided it was just too dangerous.

On March 11, 1957, Ríos Padilla received an honorable discharge with the rank of aviation radarman 2nd class. He earned a Korean Service Medal and a National Defense Service Medal.

The Coast Guard also helped him restart his education, through its GED program in Biloxi.

He did odd jobs to cover rent and food, including stints as a dishwasher for the Denver & Rio Grande Railroad and as a janitor at the university's law school.

After earning a bachelor's degree in 1962 in Denver, he taught Spanish as a graduate assistant at the University of Oklahoma and earned a master's in modern languages. He spent a year in Spain as a. Fulbright scholar and completed his doctoral degree at Oklahoma in 1971, with a major concentration in Spanish and a minor in French.

In 1968, he married Laverne Ann Lamb, a native of Estonia. They have no children.

He became a professor at the University of Colorado-Denver, retiring in 2000 after 30 years.

“I think of myself as a pretty ordinary person,” Ríos Padilla said. “My wife tells me I’m not. She says ‘You don’t talk enough about yourself, about going from GED to Ph.D. and doing this without help.’ ”

Mr. Ríos Padilla was interviewed by Joseph Padilla in Denver on July 26, 2011.*