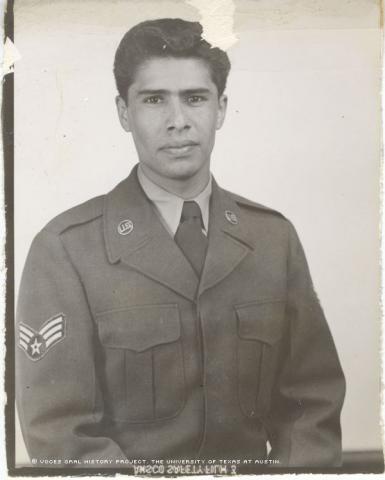 Unlike many U.S. military veterans who served in Southeast Asia during the 1960s, Fernando Rodriguez did not see a Vietnamese battlefield, even though he volunteered to fight more than once.

The closest that the Defense Intelligence Agency veteran got to the Southeast Asian nation was Nakhon Phanom, in Thailand, as part of the many international travels he made during a distinguished 26-year career in the Air Force.

"I did really want to go," said Rodriguez of going to the Vietnam War, "to see what it was all about."

Fernando was born in El Paso to Ysabel and Jovita Rodriguez, immigrants from Mexico. He recalled that, when he was growing up, his family appeared to be poorer than that of his friends.

"We didn't have all the luxuries that a lot of other people used to have," Rodriguez said.

Ysabel worked for Union Pacific and as an inspector at a Phelps Dodge Refinery when Fernando and his two brothers were young.

"[He] made good money, but didn't know how to manage it. He was a big spender," said Rodriguez.

To cope with this, Rodriguez and his brothers looked for any source of income they could find: picking cotton in the fields, collecting scrap iron, doing yard work and other odd jobs.

"Every penny we earned, it was a hard-earned penny," Rodriguez said.

Rodriguez said his family's economic predicament--and the language barrier, which prevented his parents from being more involved in their children's education in U.S. schools--never inhibited his desire to further his career prospects.

"I didn't have any options," Rodriguez said. "I knew I wasn't going to go to college because there was no money."

He realized, however, that he could further his education by joining the Air Force. After graduating from Thomas Jefferson High School, Rodriguez enlisted in the Air Force at Alamogordo, New Mexico, on February 4, 1957. He was then sent to Lackland Air Force Base in San Antonio, for six weeks of basic training.

Up until his time in Nakhon Phanom - just across the Mekong River from Laos -- Rodriguez worked for the Defense Intelligence Agency (DIA). He said that this duty was classified.

In recognition of his outstanding service, on July 26, 1972, Rodriguez was awarded the Meritorious Service Medal, the highest recognition awarded for military personnel involved in a non-combat area.

After a long and fruitful career, Master Sgt. Rodriguez retired from the Air Force on Feb. 28, 1985 at Holloman Air Force Base, New Mexico. At the time of his interview, he lived in his El Paso with his wife, Gloria Lerma Rodriguez.

When asked if he has any advice for young people, Rodriguez said, "Education first. Graduate from high school, then join the Air Force. There's a lot of opportunities in the Air Force."

Mr. Rodriguez was interviewed by his daughter-in-law, Maggie Rivas-Rodriguez in Austin, Texas, on Nov. 29, 2009.