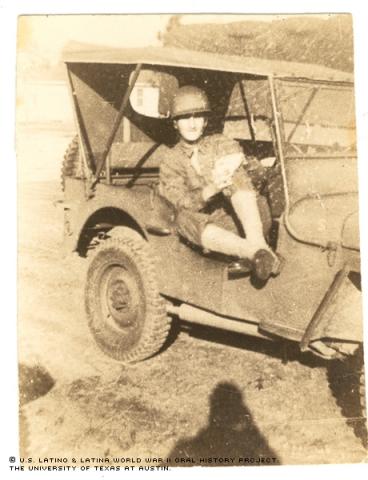 Fernando Pagan was a jack of all trades during his childhood in Puerto Rico.

At the age of 12, Pagan shined shoes every Sunday in Carolina, Puerto Rico; on Saturdays, he sold clothes for a wage of $2 and breakfast. Later, he worked as a dishwasher in a restaurant.

As a child, Pagan lived with his father and moved frequently between San Juan and barrios San Antonio and Carolina, all in Puerto Rico. Later, he worked as part of the Civilian Conservation Corps at Camp Drum, near Water Town in the northern part of New York. He built roads, for which he was paid $30 a month for his labor.

Pagan recalls him and a young man from the Dominican Republic being the only Latinos. He remembers talking to him in Spanish, although they’d also practice some English.

Pagan says he was working at Billy the Oyster restaurant when he heard about the attack on Pearl Harbor. A year later, in December of 1942, he received his draft notice.

He was ordered to report to New Jersey, where he received a medical exam. A week later, he was sent to basic training and placed in the Engineering Department.

After going to such places as Nashville, Tenn., New Orleans, La., and Virginia Beach, Va., for more training, Pagan and the other troops arrived in Liverpool, England, in 1943. He remembers having to waterproof the trucks with clay so the water wouldn't seep into them. In Germany and France, he worked in the construction of bridges such as the Infantry Fort Bridge, Balley Bridge and Panthon Bridge.

Pagan was then sent to a small village for six months in preparation for the Normandy Invasion on June 6, 1944. He arrived in Normandy on June 10, four days after D-Day.

He remembers the horrible scenes he witnessed upon arriving in Europe.

"I saw dead paratroopers dangling from the trees," Pagan said. "I saw mutilated corpses ... they didn't have time to take them away."

His unit, Company A of the 293rd Combat Engineering Battalion, was in charge of building bridges for vehicles to cross rivers and embankments, as well as responsible for transporting troops. The 293rd had two boats they used to help troops cross rivers when there were no bridges. Pagan recalls they'd transport 10 soldiers at a time and cross the river multiple times until all the troops had crossed.

When his battalion arrived in Paris, Pagan and his assistant were left behind while the rest of the group continued to Belgium, which had been occupied by the Germans. Pagan remembers celebrating victory with the French.

He apparently eventually made it to Belgium, because he remembers enjoying the company of the local women, who he says were grateful to have been liberated.

For six months, Pagan also stayed in Germany. He remembers being forbidden to talk to Germans, as well as recalls a time when he came close to death.

His truck had a mounted machine gun, Pagan says, and the mount had a metal piece that was about a quarter of an inch. Pagan says the bullet hit the metal piece, saving his life.

After serving about eighteen months in Europe, he returned to the United States in 1945. After his discharge, Pagan joined the "52-20 Club," a government program so nicknamed because veterans could receive a $20 unemployment stipend for up to 52 weeks under the GI Bill.

Pagan later used the GI Bill to take a course in upholstery. However, he only took the course for three months because he says holding nails in his mouth didn't suit him. Instead, he chose to get a taxi driver's license in 1947. Then, in 1950, he became a bartender in his neighborhood bar, earning $50 a week until 1955.

He subsequently worked at a nearby restaurant, Pablo's, until 1965 and yet another restaurant, Red Lion, for two years.

Pagan traveled to his native Puerto Rico for vacation in 1967. Thanks to a friend back in New York, he contacted someone at the Hotel Condado and was employed as a waiter. After a mere three days, he became a bartender there full time.

"We used to hang out there and the owner saw I was a serious guy, you know, calm," Pagan said. "He asked me if I wanted to work there and bartend. I said yes."