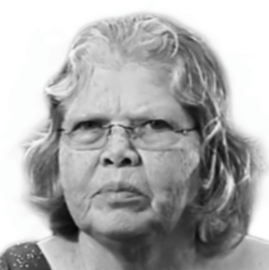 In 1959, Felicita Munguia Arriaga was a 12-year-old accompanying her mother to the polls, where the older woman planned to cast her vote for a man named Joe Hubenak.

Very few Hispanics were voting during that time for various reasons, including fear and illiteracy, but because she worked for Hubenak and his wife, Jesusa Munguia and her husband had agreed to go vote for him.

Mother and daughter walked into the old Rosenberg City Hall and up to a small table where three white women were working the polls. Jesusa Munguia marked an “X” in the signature line of her ballot. One of the women stopped her, saying that if she could not sign her name, she could not vote.

As Felicita and her mother left, they ran into Hubenak and recounted the incident. Hubenak responded that if he lost by one vote, he would go back and fight for Felicita's mother's vote. The 12-year-old girl thought that wasn’t good enough; she replied, “Well, fight it now.” But she was merely a child, and Hubenak paid her no attention.

“It just made me feel real bad, you know, like we weren’t as good as the other people that were there voting — like my mother wasn’t as good,” Arriaga said. “That’s the way that they were treating her.”

That was Arriaga's first real memory of recognizing that Mexican Americans were treated as inferior. She had seen it many times before, but watching her mother be turned away at the polls crystallized something for her and began to set a path for her political activism many years later.

Arriaga's political involvement was a departure for Mexican Americans in the small town of Rosenberg, 34 miles southwest of Houston. That involvement, starting in the late 1960s, would change her hometown: soon there would be paved streets, streetlights and eventually a park named for a Mexican-American hero.

Felicita Munguia Arriaga was born in Rosenberg on May 23, 1947, to Pedro Munguia and Jesusa Sanchez. The family lived on the north side of Rosenberg, across the railroad tracks, in the Mexican-American part of town.

Her father worked as a backhoe operator for the city’s water department -- a good job that paid relatively well and included medical insurance. But he felt insecure in his position, as if he could be fired at any time.

“It’s kind of sad when you have to live like that — to be scared of saying something,” Arriaga said. “Like my dad, he was scared of us doing anything or saying anything just because we were Mexicans. It was hard.”

Arriaga began kindergarten in 1952 at Robert E. Lee Elementary. She attended school regularly, and she and her siblings walked 5 miles to school each day. Her classes were segregated, with the white children in one room, the Hispanics in another, and the black students in yet another. Speaking Spanish was prohibited. The teachers punished any who disobeyed, and they refused to let the Mexican-American students translate for students from Mexico who were unable to understand or speak English.

She recalled one incident when she saw two boys get into a disagreement with a teacher. As the argument escalated, the students and teacher got into a fistfight. Police were called, and the boys were arrested.

Arriaga was upset because she felt the reason for the fight came down to the language barrier. She yelled at the teacher, trying to explain that the boys couldn’t understand him. Upset, she went home and told her father, but he scolded her, telling her not to get involved as that could cost him his job.

Before the incident the teacher seemed to like her, but afterward, he was distant.

In the late 1950s, while walking home from school, Arriaga and a friend stopped at the corner drugstore downtown for some ice cream. The man behind the counter served the fair-skinned Arriaga ice cream but looked at her friend, who was much darker-complected, and told them both to go outside.

When Arriaga questioned him, he replied that it was because her friend was Mexican. She informed the man that she, too, was Mexican. And then: “I took the ice cream and I dumped it on the counter and I said, ‘I don’t want it either.’”

“I walked out, and my friend walked out with me,” she said. “I then realized that because we were Mexican, it seemed like we didn’t belong with them, like we didn’t have the same rights as them.” From then on, she said, she always fought for what she thought was right.

At the age of 14, in the eighth grade, she dropped out of school. A year later she married Modesto Arriaga and moved to “Little Mexico,” a small Hispanic community right outside of Rosenberg. The couple had six children.

In Little Mexico, the roads were mud, there were no lights and there were no parks. The parks in Rosenberg were reserved for the whites, so there was no park for the Mexican-American children to regularly visit. Those were major problems for young families.

Before long, Arriaga was actively trying to make improvements to her community. Her friend Dora Olivo, a teacher, urged Arriaga to take up petitions with the city to try to have the neighborhood improvements made.

“After that, every time we needed something I would take up a petition with City Council. A lot of times they would ignore us,” she said. “But we kept on until we got things done.”

City officials finally agreed to make the neighborhood improvements. But she felt that they demonstrated reluctance in providing the services, and provided inferior roads to the Mexican-American community.

The quality of the work became a point of contention that resulted in a discrimination complaint filed with the U.S. Department of Justice. Arriaga complained that rather than pave two roads with concrete and make them 36 feet wide, the city installed asphalt roads that were only 28 feet wide, eight feet narrower than the roads in the rest of Rosenberg.

Additionally, Arriaga said, the roads were supposed to be completed within a certain time frame, but instead the city had the contractors working very slowly so that they could impose larger interest charges on the residents.

In a letter dated July 3, 1979, the Justice Department responded, saying that after investigating the allegations, it found that the city of Rosenberg had discriminated against its Mexican-American residents in the paving of the two streets. An official in the Office of the Treasury told then-mayor B.S. Babovec that it preferred voluntary compliance, but that, in fact, there had been cause for the complaint. No street in Rosenberg had been paved with asphalt, an inferior material, for five years -- until the Matamoros and Veracruz projects, according to the official documents provided by Arriaga.

Rosenberg officials responded angrily, arguing that Rosenberg had never had racial problems and denying any discriminatory action or intention.

Arriaga said when she received the federal government response, she felt satisfied.

“I didn’t get too much backlash or anything after because they were always afraid that I would go complain again,” she said.

However, at a City Council meeting, Rosenberg City Councilman Mickey Lane singled her out as an “agitator,” in an article from a Fort Bend newspaper provided by Arriaga.

During the 1960s and 1970s, Arriaga joined Olivo and Lupe Uresti in efforts with the Southwest Voter Registration Education Project to educate the Hispanic population on their voting rights. They set up a small voter registration office in town, went door to door passing out information and held mock elections to further encourage Mexican-American citizens to overcome their fears by going to vote.

“There were many times when I left my kids at home after they were born, and we would go pass out fliers and have meetings at different places to help educate the people on what their rights were — and still, they wouldn’t come out to vote,” she said.

By 1975, segregation and discrimination had eased somewhat, but there were still daunting issues for the Hispanic community in Rosenberg. That year, attorney Paul Cedillo sought the attention of Barbara Jordan with a letter and an attached series of affidavits, part of which described an incident of voter intimidation in a school board election in Rosenberg where Hispanic voters were being turned away from the polls for various reasons.

Arriaga and her husband contributed to this effort by submitting affidavits, and eventually Jordan held a meeting in Rosenberg to address the issues.

In 1979, Arriaga and Uresti ran for City Council, but they both lost. They continued with their efforts to educate voters and ran again the next term.

The first time Uresti and Arriaga ran for City Council, people “came out of the woodwork” to vote against them, she said, but the second time they got enough of the Hispanic population to vote to accomplish their goal.

“If you think that you are right about something like that, you have to go and fight for it,” she said.

Through the years, Arriaga witnessed many positive changes in the community of Rosenberg. In a small Texas town where segregated theaters, restaurants and parks were the norm, and where Mexican Americans were treated like second-class citizens, individuals like Felicita Arriaga fought for their rights and made things happen.

“My dad always told me, 'If you help people, God will help you,'” she said. “So I have always tried to help others as much as possible.”

Mrs. Arriaga was interviewed by Hope Teel in Richmond, Texas, on March 23, 2014.