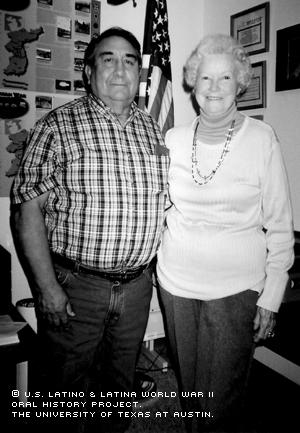 Born in her grandmother's home in 1926, in the small agricultural town of Las Tusas in northern New Mexico, Eva Maria Archuleta lived a life of modest means, like most during the World War II era.

With no electricity for refrigeration or television and no car for transportation, young Archuleta and her six brothers and sisters found an inspirational appreciation for things that today seem commonplace.

"We were so happy when we got to ride on the wagon into the town of Mora and get a piece of candy or maybe an orange. It was a good life," she said.

At Christmas, Archuleta and her three sisters received a single doll, which they’d share among them.

"You could say that we didn't have much," Archuleta said. "But we were happy."

Archuleta also remembers walking to school with her sisters during the winter, the ground covered with snow. Because they wore dresses and had nothing to cover their legs except stockings, they’d be cold and wet by the time they made the one-mile trek to the single-room schoolhouse.

"All of us girls would put our shoes and socks by the wood heater to dry and we would have class in our bare feet," Archuleta recalled.

Although we didn't have much, we had something," Archuleta said. "We had parents who provided for us and were good to us."

Many Latino families during this time didn't prioritize education and would instead encourage their children to quit school and work to help the family, Archuleta says. Her parents, on the other hand, always reminded her of the importance of knowledge.

"My father always told us that he wanted us to have an education," Archuleta said. "He told us it didn't matter if other kids teased us about our old clothes or that we wore the same dress every day. … He told us to pay no attention to them."

Despite the everyday hardships of growing up poor during the Depression, young Archuleta faced another problem growing up: racism. She remembers not being allowed to speak Spanish.

"They [teachers] gave us the evil eye if we spoke in Spanish," said Archuleta, who also recalled how Anglo students answered questions and gave speeches in front of the class while she and other Latinos sat quietly in the back, not invited to participate. "They [Anglos] always got picked for the leading roles in plays and they wouldn't let the Hispanic boys play sports with them," she said.

During her high school years at Highlands Training School, Archuleta met the love of her life, Bennie Archuleta, at the age of 16. After the training school closed, she quit school. When Bennie went to Germany in 1943 as part of the U.S. Army, she found work as a housekeeper and a babysitter.

The couple kept in touch with letters.

"Sometimes I would get his letters in the mail and parts would be cut out," Archuleta said. "We never knew why the Army was doing that, but it made them awfully hard to read. I didn't keep any of those letters."

As a devout Catholic, religion played a significant role throughout Archuleta's life, helping her get through the months of waiting to hear from Bennie, among other trying times.

The war ended only two days before Bennie was to be stationed in Japan. Archuleta remembers the exact moment she found out the conflict was over.

"I was working as a clerk at a retail store called Newberry's when I heard them announce the war was over on the radio," she said. "Everyone was overjoyed -- people were ringing the church bells, praying and lighting candles."

To celebrate this good news and their love for one another, the couple was married in June of 1946. Soon after, they had their first child, Toby Edward Archuleta, followed by three more sons over the next eight years.

Archuleta encouraged all of her sons to pursue their education, the same way her parents had encouraged her. So it wasn't surprising when she went back to high school at the age of 36.

She made history when she graduated with her second son, Bennie, in 1967.

"It was the first time in the history of West Las Vegas that a parent had graduated with their child," Archuleta said.

Her dedication to her children paid off, with three of her four sons earning college degrees and her youngest, now deceased, serving 13 years in the Armed Forces.

Archuleta insists that even though improvements are needed, society today is much more accepting of Latinos than it was when she was growing up.

"Nowadays, you see doctors and lawyers with names like, Rodriguez and Garcia, and you just didn't see that when I was growing up," Archuleta said. "It's getting a lot better."

Her advice to Hispanic youth today:

"Stand up for yourself. … Don't let people tell you that you can't do something, because you can."