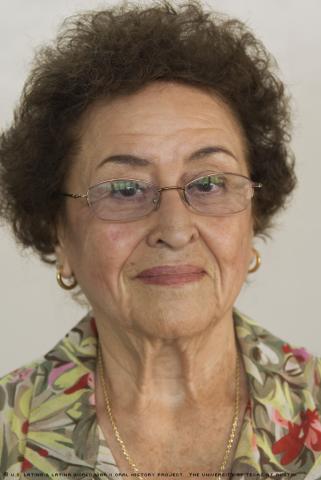 For Estella Zaragoza Hernandez, working in the fields under the sizzling California sun as a young girl was not much more than a child’s game.

It was part of her life, growing up as the youngest of six children, the daughter of Mexican immigrants who crossed the American border years before she was born. When she was a child, Hernandez’s family migrated from place to place picking crops and working the fields throughout California.

It was the beginning of a life of hard work that took Hernandez to different locations in the state, and included roles as a field worker, the wife of a World War II veteran and a teacher’s aide. Whatever she did, Hernandez always looked forward to serving her country and helping her community.

Hernandez was still in elementary school when she began helping her family by picking peas in the fields. She recalled that the school migrant children had to attend was different from the one other kids went to. Her school was made out of an old train car and her Anglo teacher arrived to the classroom by riding a horse.

“I went to eleven schools because of the fields,” Hernandez said.

Hernandez remembered that being the youngest child in her family was an advantage in receiving an education. She said that no one older than 15 was enrolled in school and instead had to work to support the family. Even though Hernandez did not have a stable home where her family could live, or a group of close friends whom she could spend her childhood with, she said her early years were happy.

When Hernandez was only 14 and in middle school, Pearl Harbor was attacked. She described how society was affected by the attack and recalled Americans’ attitude towards Japanese Americans.

"We would all look at them -- we were mad at them!" Hernandez said.

“The letters would say, ‘Hi Fat’, because I was kind of fat,” she said.

During the war, Hernandez stayed home, and besides working, she attended dances with her sisters and girlfriends. This included going to Sunday dances, tardeadas. “We would go to tardeada dances every Sunday,” Hernandez remembered.

Hernandez smiled as she recalled changing her age from 17 to 18 on her identification card.

Hernandez recalled the braceros who charmed the young American women. The braceros were temporary workers from Mexico who were allowed to enter the U.S. under a special program. She said her sister fell in love with a bracero who was already married in Mexico. She said it was typical for married braceros.

A lot of servicemen would also attend the Sunday dances, and in 1946 Hernandez met her husband. Carlos C. Hernandez was a young man just out of the service. Hernandez laughed as she remembered when she met Carlos in the plazita.

“I did not like the idea that he was paying more attention to my sister than me, “she chuckled. She said that during their dating years he was a gentleman at all times. Years passed before she asked him to marry her.

“I was the one who asked him -- he never asked me to marry him, “ she said. In 1951, Hernandez moved out of the house when she married Carlos.

Hernandez became the mother of two sons and three daughters. Besides being a housewife and mother, she also worked as teacher’s aide, often helping bilingual children with their education. She proudly noted that two of her daughters followed in her footsteps and earned their teaching degrees.

At the time of her interview, Hernandez was still married to Carlos and they had 14 grandchildren. Her eldest son, George, passed away several years ago. Through good times and bad times, Hernandez was pleased with everything she did in her life.

“I am so happy I was able to enjoy life that way,” she said.

Mrs. Hernandez was interviewed on June 9, 2010, at the Hazard Park Armory in Los Angeles by Valerie Martinez.