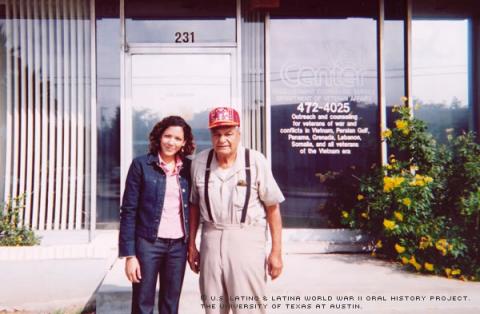 By the time Esequiel Zamudio was drafted at age 21, he already knew hard work and hardship.

Zamudio started working as a young man for a government project called the National Youth Administration. As part of the NYA, he worked for four years building public works like San Antonio, Texas’, River Walk. After that, he labored as an auto mechanic, which he says he enjoyed.

Zamudio was drafted in October of 1942. His battalion was originally supposed to go to Africa to aid General George S. Patton in fighting German General Erwin Rommel, but that campaign was over by the time he finished his training. His battalion was instead sent to the Mojave Desert in California for four or five months of training.

After that, the military sent Zamudio’s battalion to Hawaii to guard against another Japanese attack. He left for New Guinea from there, landing at the end of 1942. He stayed in the Pacific until the end of the war.

On Feb. 10, 1945, Zamudio and the 33rd Infantry Division invaded the island of Luzon after spending time in New Guinea, where United States forces were “mopping up” and destroying Japanese plans and ammunition.

“We made the invasion in the island of Luzon and we took the city of Manila and Clark Air Force Base,” Zamudio said. “We stayed there for about a year.”

The fact his service was during the final battles of the war didn’t diminish the feelings of uncertainty and danger.

“You couldn’t get out of your foxhole at night ’cause anything that moved we would just shoot at,” he said. “A lot of times they [U.S. forces] killed some of our own troops; we did, because they were out of their foxholes and at night you don’t know who’s friend and who’s enemy until the next morning.”

Zamudio has many memories he’d prefer to forget. One has to do with a mysterious cave high in the hills in the Philippine Islands. The Americans couldn’t reach it by foot because the Japanese would attack them.

“We didn’t know what was inside,’’ he said, adding that the U.S. knew many Japanese soldiers were surrounding it.

Since the Americans couldn’t reach the cave, they called the engineers and Air Force to bomb its opening.

“As bad as I hate to say it, that cave was a hospital that the Japanese had, and inside that cave they had women and children and newborn babies, but they were all burnt.

“Anything is fair in war, but not something like that,” said Zamudio through tears.

The 33rd then started amphibious training in preparation for invading Japan. But before that, the U.S. dropped atomic bombs on Hiroshima and Nagasaki, making the invasion moot.

In September of 1945, Zamudio landed on the Japanese island of Honshu, where he stayed for four months. The objective was to confiscate and destroy Japanese weapons remaining after the war.

He returned to the U.S. in January of 1946 and was discharged that year at the rank of Staff Sergeant. Once back in San Antonio, he had a hard time finding a job, not because he was Mexican American, but because of his disability: He’s considered 100 percent disabled as a result of a mortar shell wound he received. Finally, he approached the Red Cross, who intervened to get him a job as an airplane-engine mechanic at Kelly Field in San Antonio, where he worked for 39 years.

Zamudio’s two sons from his first marriage, Thomas and David, are Air Force veterans, and a granddaughter and grandson both served in the Marine Corps in Saudi Arabia. He married Susana Longoria in 1993, and they live in San Antonio.

Mr. Zamudio was interviewed in San Antonio, Texas, on October 25, 2003, by Desirée Mata.