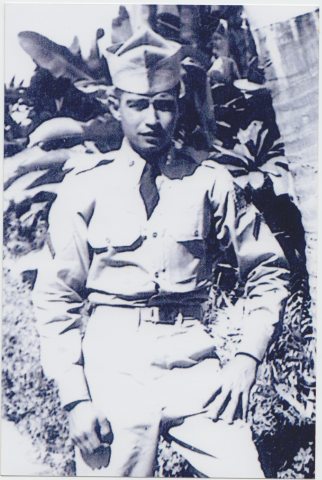 Laredo, Texas, native Ernesto Sanchez didn’t always want to join the military, even when there was a war in Korea. He was a college student -- hoping to get an officer's commission in the ROTC -- and didn’t want to leave his family. That changed when he saw that communists were advancing through Korea. He said to himself, “Well, someone has to stop them.” He decided to step up.

Sanchez was born in Laredo on Dec. 4, 1928, to Ernesto Sanchez Sr. and Paula Rodriguez, who had emigrated from Mexico to find a better life in America. They operated La Rivera dairy and a grocery store in Laredo. His parents had had only three days of school and his mother had reached the fifth grade. His mother taught his father what she knew, and she also told their six children that they needed to get an education. So, even though he did not like school, Sanchez stuck with it.

After graduating from Martin High School, Sanchez started a pre-law program at Laredo Junior College and Texas A&M at College Station, then transferred to the Texas College of Arts and Industries in Kingsville, Texas, 126 miles east of Laredo. After his time in the military, Sanchez earned his master’s degree in education.

After basic training at Camp Roberts in California, Sanchez was stationed in Japan as part of the 40th Infantry Division, 223rd Regiment, where, he said, he “tried to do as little as possible.” He and his squadmates mostly partied in downtown Tokyo. He also collected items like china dishes to send back to his mother, so she could sell them. He supplemented his pay in Japan by loaning money to fellow soldiers who gambled and then repaid him double on payday. He also continued a moneymaking operation that he started during basic training: doing soldiers’ laundry for a quarter per load.

He was soon shipped off to Korea and stationed as a guard at the 38th Parallel, the border between North and South Korea. He recalled that he was increasingly frustrated by U.S. soldiers throwing food across the wall in Chunchon to help North Koreans. He was concerned that the supplies were most likely being used by the enemy. He requested to be moved to the front lines.

His request was granted, and he was made a corporal with his own platoon. Soon after, the losses of war caught up with him. He took part in the battles of No Name Hill, the Iron Triangle and Heartbreak Ridge. Three of his company’s commanders died; Sanchez saw one of them get shot between the eyes. He also lost friends to friendly fire, a subject he still gets emotional about. One of his friends was killed by guerillas. He and his platoon searched for the guerillas but never were able to find them. At one point he caught some Chinese soldiers sneaking up to the camp and killed them. Afterward, he felt greatly upset and went to talk to a priest, who told him, “It was you or them.” Sanchez recalls replying: “They were someone’s sons.” Looking back, Sanchez believes he suffered from post-traumatic stress disorder after every battle.

He took part in capturing and holding No Name Hill, so named because the soldiers did not know its actual name. After the securing of No Name Hill, Sanchez was sent to Non-Commissioned Officers School, where he excelled as a leader. Because he had such high marks in NCO School, he was assigned the role of instructor. After a few months, although he had been told he was valuable in that position, Sanchez increasingly wanted to return home as quickly as possible. Again he requested that he be sent to the front lines, and again his request was granted.

When he returned to the Korean front lines, Sanchez recalled, he noticed other things: the Americans blowing up the South Koreans’ onions and garlic so that they did not “smell bad.”

He remembers sending letters home, telling his girlfriend back in Texas everything that was going on in Korea but lying to his mother. For roughly a year, he told his mother that he was still in Japan, not in Korea.

His family was waiting for him at the port in San Francisco when he got off the ship that brought him home, the USS Walker. After his return, he was stationed in Los Angeles and then at Fort Bliss in El Paso, Texas, and then finally discharged from the military.

He returned to Laredo to teach but was blacklisted by what he referred to as “The Old Party,” an established network of families that essentially ran the town and did not like his family. So Sanchez moved to California, where he got a job teaching English and Spanish to juniors and seniors at Big Bear High School in Big Bear City. Eventually he married and had four children, then got divorced. After three years of being single, he remarried and had another child.

These days Sanchez is living back in his hometown and travels around Laredo, teaching people about “what really happened in Korea. …They have to know why they’re free.”

Sanchez said he believes the United States won that war because the U.S. helped South Korea develop. He tells his listeners that his favorite memories involve watching Korean children play on the ice and seeing North Koreans settle in South Korea. He remembers that American troops bought apples to feed the people and that he collected money to donate to an orphanage about 40 miles back from the front lines.

Sanchez stands firmly in support of the U.S. military actions overseas, including the Iraq War, and on military drafts. He said soldiers do not want medals.

“They just want to come home,” he said.

Mr. Sanchez was interviewed by Laura Barberena in Laredo, Texas, on March 6, 2010.