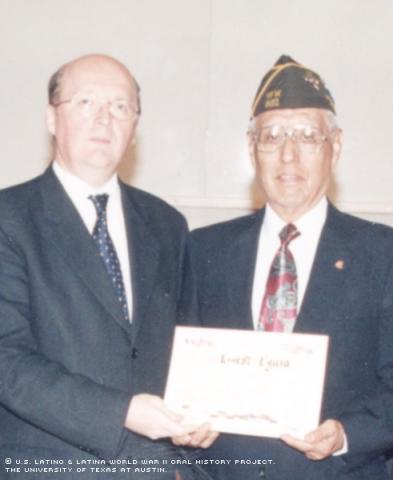 Ernest Eguia spent a lifetime on the cutting edge. Rising above the crippling poverty of the Great Depression, Eguia was at the forefront of the Allied Invasion of Normandy during World War II and was also on the frontlines of the Civil Rights Movement, pioneering the movement for Latino integration in the Houston area after the war.

Few people who knew Eguia as a salesman would have known about his incredible journey from Lockhart, Texas, his heroics during the Second World War or his leading role in the Houston Council of the League of United Latin American Citizens (LULAC). His story spans decades and details a trans-continental struggle for freedom.

Born Nov. 7, 1919, to Narciso Eguia and Maria Lara Eguia, Eguia is the oldest of six children. The family moved to Houston shortly after his birth during the Depression. Narciso worked as a railroad pipefitter for Southern Pacific, but the Eguias still struggled to make ends meet.

Like many young men in that era, Eguia began contributing to the family at an early age, bringing home food from the farmers market and helping his siblings gather toys when no money was available. He shined shoes at a barber shop and hawked newspapers at the corner of Washington and Houston Avenues, demonstrating the industriousness and dedication that would follow him through the remainder of his life.

Although Eguia excelled in the classroom, he dropped out of Sam Houston High School after the 10th grade and got a job in a menswear store, Buck's Dry Goods, where he made connections that would profit him after his return from the war. In October of 1941, he was drafted.

Eguia was shipped to Fort Sam Houston in San Antonio and then moved to Camp Roberts in California for basic training.

After basic training, Eguia received specific artillery training at Fort Lewis in Washington. There, he focused on coastal defense. The United States, in the wake of the Japanese attack on Pearl Harbor, claimed to fear an assault on the country's west coast, even though it would have been difficult for the Japanese fleet to extend a sustained naval power projection over such a distance.

Specializing in 155-millimeter guns, Eguia got trained to be a forward observer for artillery. Scanning the surrounding area, he acted as a lookout for artillery cannons, calculated trajectories and surveyed for potential targets. Later, from January through September of 1944, he was stationed near Santa Barbara, Calif., with the 144th Field Artillery Battalion of the VII Corp, 1st Army.

After a stint of training in the Mojave Desert, Eguia was shipped across the ocean. There, he was part of the invasion of Europe at Normandy in France on June 11, 1944. After witnessing some of the most brutal fighting on the face of the European continent, the Allies managed to drive the German military backwards through France.

Eguia remained in occupied Germany after Berlin fell and helped to promote the restoration of German society. By encouraging the rebuilding of German infrastructure and performing various logistical duties, the Americans were able to withdraw from Europe at the end of the war.

"I thought that coming back to Texas, things would have changed," Eguia said, referring to race relations.

But within a week after his return, as he drove on a Houston street with some friends, a police car swerved in front of their car. Eguia yelled at the police car and the officers stopped their vehicle, guns drawn.

"I asked, 'What's going on? We didn't do anything; they had to pull their guns,'" Eguia said. "I was the one talking the most, and they took me to the police station."

Eguia recalls the arresting officer referring to him as "a smart boy,” and saying, “He's a smart Mexican."

"And I said, 'I see things haven't changed since I left here four years ago,' he recalled, "And the sergeant heard that, he said, 'You been in the Army four years?' I said, 'Four years.'"

In 1945, he took a job with Warren Petroleum Company. Warren had been founded in 1922 and eventually was purchased by Gulf Oil. Eguia applied his military skills in a civilian capacity. The same techniques that once shelled German positions in the French countryside were used to build a pipeline across Texas from Huffman to Galveston, crossing through some of the most densely packed pipeline areas in the country.

After leaving Warren, Eguia eventually took a job with his pre-wartime employers at Buck's Dry Goods. Eventually focused on men's clothing, he built a solid career at Buck's.

But Eguia’s days as a clothing salesman and store manager only tell a small part of his post-war life. Defying the defense-industry led paranoia about Communism, Eguia joined LULAC. Despite a concerted effort by the military to demonize collective mass movements, he was prompted to join LULAC after hearing the story of Macario Garcia, who received a Medal of Honor, but because he was a Mexican American, was denied service at a hamburger joint. Eguia says he wanted to put an end to some of the anti-Latino racism in Texas at the time, and LULAC was one of several organizations created to gain equal treatment for Hispanics.

Spearheading projects to integrate Latinos into various levels of Houston city government, Eguia's LULAC Council was part of a larger renascence of Hispanic activism. The high number of Latinos in Texas made the Houston Council of LULAC one of the nation's most prominent.

Holding several posts in the Houston Council, as well as at the national level, Eguia and LULAC were involved in getting Houston to integrate its police and fire departments.

At the time of his interview, Eguia continued to participate in LULAC events and lived in Houston with his wife. They have four children, all of whom attended college and all received business-related degrees. Eguia also remained committed to preserving the memories of WWII and veterans' issues, staying active in the Veterans of Foreign Wars and the American Legion.

Mr. Eguia was interviewed in Houston, Texas, on February 3, 2001, by Claudia Garcia.