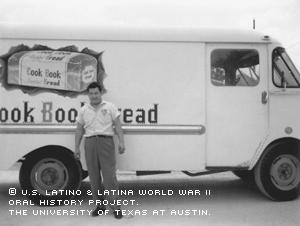 Like many veterans coming home from World War II, Henry Falcon remembers having a difficult time adjusting to American society. His return to the peace of America was a stark contrast to his three years of fierce air combat as a gunner on bomber missions over Europe.

Falcon distinguished himself in the war, earning a Distinguished Unit Citation Badge, EAME Campaign Medal with seven campaign stars, Good Conduct medal and several other citations. But in some respects, surviving the bomber missions might have been the easy part, as the conflict took its toll both overseas and on the home front: Among other difficulties, one of Falcon’s close childhood friends was killed in the war, and Falcon’s father, Ramon Falcon, had died of a heart attack while Falcon was overseas.

"It hurts," said Falcon, recalling that time in his life. "When I came home, I couldn't find myself. It was hard."

Falcon’s mother, Cassimira Rodriguez Falcon, and the rest of his family were elated to have him back home safely in Texas, but he was still having difficulty finding himself -- until he met the woman of his dreams, that is.

Today, as Falcon sits in his Houston home, he chuckles while regaling how he mistakenly met the love of his life. He remembers strolling down Main Street in Houston 56 years ago, walking up to Gloria Felan and saying to her, "Hey, you stood me up the other day.”

"I had had a date with somebody, and I thought it was her," Falcon said.

But Gloria wasn’t that woman; Falcon had made a wrong assumption.

Despite the case of mistaken identity, Falcon was rewarded for his error, as he was smitten over Gloria. He looked her up in the phone book and they soon began dating.

"I used to take her to the drugstore, where for 15 cents you could get a ham sandwich and a soda pop," Falcon said. "Those 15 cents were hard to come by."

In December of 1947, the couple married and, today, they’ve been married for 56 years.

The Falcons had three children: Cynthia, Ronald and Richard. They’re all grown and live in Houston, where the couple resides today.

Enrique “Henry” Rodriguez Falcon was born Dec. 6, 1921, in Austin, Texas. He grew up in a family with eight children. When he wasn’t in school, he spent his days river fishing and playing sandlot baseball.

"I had a normal childhood," Falcon said. "In them days, there wasn't much to do."

His father, Ramon Valdez Falcon, worked as a sharecropper during the Depression, and then became an employee of the Works Progress Administration, a government-sponsored program designed to assist and provide jobs to unemployed men.

But the Depression also brought hardships for the Falcon family.

"We didn't have no TV, no telephone, nothing like we have now," Falcon said. "Just like everybody else, we had a hard time in them days. It was tough."

The Falcon family moved to Kingsville, Texas, where he attended high school. He continued school until he dropped out in the 10th grade, when he took a job as a tailor in Galvan's Tailor Shop.

Then the news came of the Japanese attack on Pearl Harbor.

"It was a Sunday and I was in my room," Falcon said. "We had the radio on, and that's when the news came out."

Whether to participate in the war effort wasn’t a question to be sorted out, Falcon said. Two of his brothers had already volunteered for the service; when he received his draft notice, he opted to join the Army Air Corps.

"Everybody wanted to go because of what had happened," Falcon said. "Not that we was war hungry, but we knew they [the Japanese] had attacked the United States."

"They asked me if I wanted to fly, and I said absolutely. I didn't know much back then," Falcon said.

Although he says he was only partially trained, he was sent overseas to become a "waist gunner," men who operated guns on the sides of bombers. He remembers being the only Latino in his unit, but feeling comfortable and making friends with his fellow soldiers, regardless.

After flying 12 missions, his unit, the 447th Bomb Squadron, discovered Falcon wasn’t fully trained, so he was reassigned to the ordnance department, where he took care of ammunition for the B-25 bombers.

Falcon also served overseas in Tunisia, Sicily, Naples, Rome and North Africa. He remembers his squadron flying alongside the Tuskegee Airmen, the all-black fighter wing that helped desegregate the Army after WWII.

He was in Italy when the war ended and recalls the "big party" in the streets and other massive celebrations.

After the war, Falcon returned to Texas and moved to Houston and, using the GI Bill, attended a watch-repair school. He later married Gloria, and they eventually had three children. He worked as a salesman for American Bakers until his retirement in 1980.

Now, the Falcons stay active with church activities. Falcon says he often reflects on his life during the war and laments his old WWII friends’ passing. He also casts his thoughts upon younger generations, however.

"They have more opportunities," Falcon said. "I want to tell them to not forget us, the old guys that went to war. We opened the doors for them."