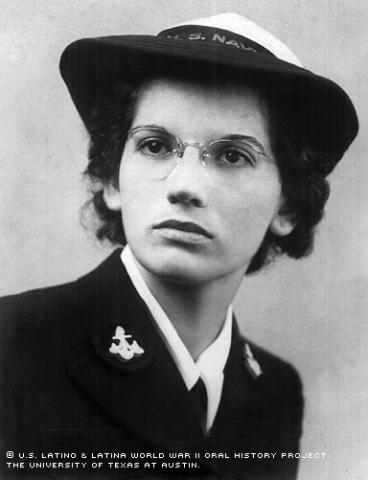 One needn't go further than Emma Hernandez’s own family, well-known in their community of Pharr, Texas, for their humanitarian efforts, to understand why she has devoted her life to civic service.

Hernandez’s mother died when Hernandez was only 4 years old, so she grew up with an aunt and uncle she always referred to as "Mother" and "Father." Among her more traditional community service activities, Hernandez's surrogate mother worked hard to ensure the less fortunate would be given more than a pauper's funeral upon their deaths. Efforts like those had a major influence on Hernandez's life.

Taking her aunt's lead in serving others, Hernandez joined the Navy in 1943, receiving her training at Hunter College in New York. Afterward, she was assigned to Rodd Field in Corpus Christi, Texas, for two years. The field would be among the first to be retired at the end of the war.

While in Corpus, Hernandez became pregnant with her first son. As was the custom in those days, she was honorably discharged as a result of the pregnancy. Even though she lamented the end of her service, she wasn’t that unhappy to see the job end.

Hernandez's main job was to log pilots' training hours, so she didn't develop strong friendships with many GIs, as they were shipped overseas quickly after their training was over. Although she hadn’t seen a lot of the country, as she’d hoped, she was happy she’d learned a lot from the experience. "The most important thing that I learned I have kept with me, and I will have it with me until I die: discipline," she said. "And you don't get that anywhere else."

Even though she was one of only a few Latino women in the military, Hernandez didn’t experience a lot of bias or problems. But she did witness segregation, noticing how blacks in the military were assigned to separate barracks.

"Every now and then someone would make a remark that I would ignore, but they were problems that didn't amount to anything," she said.

Hernandez’s husband was being stationed in and out of the country, so she and her children moved into Georgia Hall in Washington, D.C., where many soldiers' families lived. During her time there, her English improved greatly. Growing up, only Spanish was spoken at home and at church.

"I have always told my children that I am very proud of who I am because I can speak two languages. … I want them to be like that," said Hernandez.

When her husband was done with his service, the family moved to McAllen, Texas, where she and her husband were residing at the time of this interview. Although she only served two years in the Navy, she and her family continued to serve in military-related affairs. One of her sons was a member of the Air Force Band, another son retired from the Air Force and her youngest son served in the Navy. A son-in-law is a veteran of the Vietnam War.

Hernandez and her husband continued to be the most active in the family. In McAllen, she’s the treasurer of the VFW Auxiliary, but her duties don’t stop there. She’s a member of the Disabled Americans Veterans Association (DAVA.) as well as one of six "Sunshine Ladies," a group of women ranging in ages from 70 to 82 years who visit Veterans Administration nursing homes at least twice a year -- usually Veterans Day or Memorial Day. They bring food and gifts to disabled veterans.

"I am most happiest when I am in the kitchen," Hernandez said. Some of the Auxiliary and DAVA members meet every Friday morning to make robes, booties and bags for the veterans. They are a proud group of women who wear gold angel pins on their lapels when they’re working.

Hernandez and her husband of 45 years also regularly attend the funeral services of veterans. Since the terroristic attacks of Sept. 11, 2001, she said she’s noticed a heightened patriotism and palpable respect for men and women in the Armed Forces.

At 79 years old, she appears nowhere near slowing down. Eight years ago, she had heart surgery, but she merely sees that as another incentive to continue what she’s doing.

"I do something that I promised myself to do," Hernandez said. "The good Lord gave me another chance, and I'm taking it ... I'm enjoying life."

Mrs. Hernandez was interviewed in McAllen, Texas, on July 1, 2002, by Gary Villereal.