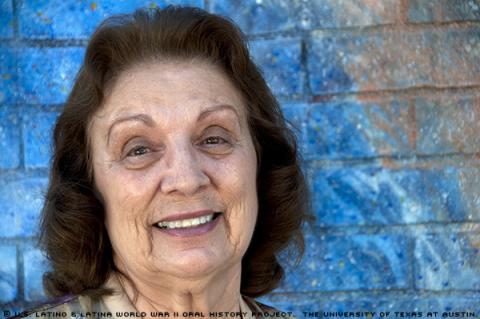 Emily Martinez Alvarado never served her country in the military. She served it at home, as one of the thousands involved in the Chicano movement, by way of the Crusade for Justice, and as an important civil rights activist during the Vietnam War era.

Emily Matilda Martinez was born on Feb. 18, 1935, in Taos County, N.M. She moved with her family to Taos as a baby. When she was three, her parents separated. They divorced two years later. She was their only child. Both later re-married and had more children.

After the divorce, Alvarado moved to San Francisco with her father, José Rafael Martinez. She said the house was on Turk Street. She remembered that it “was the waterfront area because I could smell the ocean.” It was 1941, and World War II was raging. Alvarado said her father worked in the shipyards.

She remembered buying war stamps or "bonds" to support the troops overseas. When her father would leave for work at night or when the air raid sirens blared, Alvarado would crawl under her covers with the radio and listen to the Big Band Sounds, Bing Crosby, and smooth love songs.

“Even if I was that young, I still really did like Frank Sinatra,” she joked.

One thing she did not listen to on her radio was Spanish music. In fact, she spoke little Spanish during her time in San Francisco. The people in her neighborhood spoke only English. And Spanish was not allowed in the schools.

“The teachers would really come down hard on you if you spoke Spanish in school,” she said.

When teachers reprimanded her for speaking Spanish, some of her classmates laughed at her, making her feel beaten and broken. She spoke Spanish when family came to visit in San Francisco or when she saw relatives in Colorado. But the reunions were rare.

After World War II, she and her father moved back to New Mexico. When she was 10 years old, her father re-married, and so Alvarado moved to Denver to live with her mother, Corina. Her mother lived in Denver because she was caring for relatives.

Alvarado was a high school junior during the last year of the Korean War. One of her older friends had joined the Navy and came home to visit. Alvarado was impressed with her uniform.

But her mother wouldn't let her enlist. Alvarado was so angry that she decided to get married in order to get away. Because of this, Alvarado said the choice to marry her first husband was not a wise one.

“I married a young man, had two beautiful sons with him, but that ended up in divorce,” she said. They were married in 1954 and divorced in 1962.

In 1965, she married her second husband, Raymond Alvarado, a WWII hero. During military maneuvers in 1943, a missile from a plane hit his ship, the HMT Rohna, killing more than half of the 2,100 men on the ship. Alvarado was able to save five men: a captain, a sergeant and three crewmen. Alvarado was always very proud of her husband’s heroics.

Emily Alvarado was very active in the war against racism and discrimination. In the 1970s, she participated in many walkouts against injustice in education and employment, as well as police brutality.

From 1968 to 1974, she worked for the Crusade for Justice, a Chicano civil rights organization founded by Rodolfo “Corky” Gonzáles, because she and her husband did not think U.S. soldiers belonged in Vietnam. They also noticed many Chicanos were not receiving the employment opportunities they deserved.

“They called us a militant, but how could you be a militant when I had [our] children going to that school?” Alvarado asked.

The school she mentioned was a public school in the district where she and her family lived. Her eighth child, the oldest, was busy raising her own family.

Alvarado, along with the other women in the Crusade for Justice, operated the kitchen, cleaned the bathrooms and hallways, and worked to ensure their children would receive a proper education and that their husbands would obtain employment.

Still, Alvarado’s major focus in her civil rights activism was the educational system. She and some of the other mothers in the Crusade for Justice interviewed schools in the Denver Metropolitan Area. They visited great schools with plenty of resources and supplies, which angered them because their own children had to make do with fewer and lower quality resources and supplies.

“This particular school had so many supplies they could have given it to other schools, but they had nowhere to store them, and that angered me too,” she said.

The women used their frustration as motivation and started the Escuela Tlatelolco. Named after the center of education and fine arts for the Aztec Empire, the school was geared towards Chicano youth who found little value in the education system and their personal economic and social situations. Here, Alvarado taught core classes as well as ancestral history so the children would understand and appreciate their cultural roots.

“We wanted to make a difference -- we wanted to give positive thoughts to our children,” she said. She also worked at La Raza Unida.

On that note, Alvarado said society owes a lot of respect to Dr. Martin Luther King, Jr. and Rodolfo "Corky" Gonzales not because of money or power, but because they believed "it has to be better."

Looking back over her life now, Alvarado said she has been blessed, and she’s thanked God for every day she wakes up.