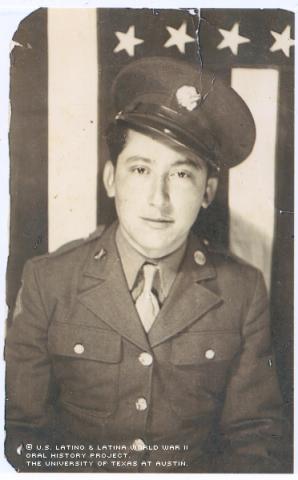 As acting squad leader and a combat veteran during World War II, Emilio G. Rodriguez was charged with the responsibility of indoctrinating new soldiers coming to the front lines.

"The enemy is in front of us," Rodriguez told his men on the eve of the invasion of Okinawa. "The only thing I can tell you is that you have to take cover and concealment as much as you can so you can go home."

Okinawa lay only 350 miles from the Japanese main islands, its location geographically strategic for the Allied forces preparing for an invasion of Japan. The invasion of Okinawa began April 1, 1945.

"There was so many tracers [from the guns] you could see the sky was a beautiful red," said Rodriguez of the pre-invasion bombardment.

After encountering only light resistance, the invasion forces landed on the southwestern side of the island and moved inland. The battle for Okinawa would rage until June 21, taking the lives of 12,000 American soldiers and Marines in the process. Rodriguez notes that one of the soldiers killed was Lee McGinnis, a farmer from Mississippi, and one of his best friends.

Rodriguez was born in Vergel, Texas, on March 11, 1920, to Guadalupe and Manuela Gonzalez Rodriguez. Rodriguez and his eight siblings were raised on a farm in Falfurrias, Texas. He remembers waking early to do chores before attending classes at Falfurrias Grammar School. After school, he’d come home and his mother would cook something for him to eat before he went to help his father in the fields until late in the evening. In 1936, at the age of 16, Rodriguez dropped out of school to work full time on the farm from which they derived their livelihood.

On May 2, 1942, Rodriguez was drafted into the U.S. Army and processed in San Antonio. He was sent to Fort Ord, Calif., for five months of basic and infantry training. There, he was assigned to Company B of the 1st Battalion, 184th Regiment, 7th Infantry Division. Later, he received additional training in Fort Lewis, Wash.

After that training, Rodriguez returned to Fort Ord. A few days later, he and the 7th Infantry were shipped to the Aleutian Islands in the North Pacific. On May 11, 1943, the 7th Infantry invaded the island of Attu. The fierce battle for Attu lasted until the end of the month, when it was declared secure. Six men had been killed and several wounded from Rodriguez's company of 150 men. They next invaded Kiska, but the Japanese army pulled back before the attack, so the landing was unopposed.

On Feb. 1, 1944, infantry forces invaded the Kwajalein Atoll and secured the island in five days. For his actions during this time, Rodriguez was awarded a Bronze Star.

On Oct. 20, the 7th landed on the island of Leyte, on the eastern edge of the Philippine Islands. Their job was to clear Leyte of enemy troops, but they encountered fierce resistance from Japanese snipers in the inland jungles.

"They would pull wires attached to other palm trees and shake them so we would fire in the wrong palm tree," wrote Rodriguez after his interview. "That would give them a clear shot [at] us."

Around Dec. 12, organized resistance ended and Rodriguez, by now transferred to another regiment within the same company, was sent with other troops to secure Camote Island. They returned to Leyte after securing Camote and embarked on the invasion of Okinawa, where Rodriguez was among the first waves of troops to land. The invasion forces encountered weak resistance and made their way inland with relative ease.

The next day, April 2, 1945, Lee McGinnis, Rodriguez's friend since infantry training, was killed by machine-gun fire. Rodriguez remembers his friend had hoped to survive the war and return home to his farm.

"If I go back home, I'm never going to whip my mule like I used too," he remembered McGinnis telling him. "You know what I'm going to do when I get to the end of the row? I'm going to loosen their harness and I'm going to smoke me a cigarette."

A week later, after his division captured a hill, Rodriguez was standing forward watch on the slope, a makeshift tent made with his poncho protecting him from the rain. He says he was in his foxhole looking down the hill when a mortar shell exploded above him, causing a landslide that buried him. When he regained consciousness, he found himself in a field hospital a few miles behind the front line.

Rodriguez was later told that members of his platoon had dug him out and rushed him to the hospital. At first, the doctors couldn’t figure out what was wrong with him, but they soon found out that he’d temporarily lost his hearing and was experiencing disorientation.

He returned to his father's farm in Falfurrias, but didn’t want to go into farming. Instead, he moved to the U.S.-Mexico border city of McAllen, Texas, where he got a job as a poultry deliveryman. During this time, he met his future wife, Maria Olivia Escobar, and was married on Jan. 9, 1949. The couple eventually had four sons.

In 1966, Rodriguez started his own food-distribution company, Rodriguez & Sons. The year 1987 marked new beginnings and tragic endings for Rodriguez: The name of the business he founded was changed to Valley Pride Food Distribution, but the year also marked the death of his wife after nearly 40 years of marriage. A subsequent marriage lasted only four years before ending in divorce, but produced another son who was 9 years old at the time of Rodriguez’s interview.

Now retired, Rodriguez has left the day-to-day duties of his food-distribution business, handing the reins over to his sons. He spends his time in a decidedly more peaceful environment than during his tour of duty, visiting with his grandchildren in McAllen.

Mr. Rodriguez was interviewed in McAllen Texas, on April 6, 2002, by Joe Myers Vasquez.