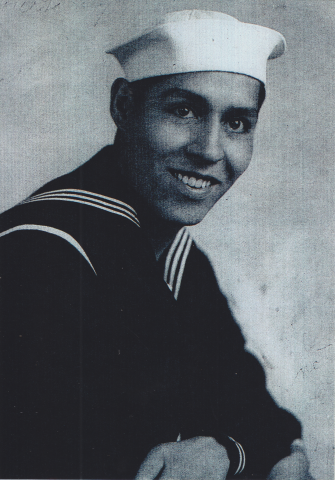 Emiliano E. Gimeno remembers that when Pearl Harbor was bombed by the Japanese, he initially did not realize how the event would change his life.

Born in El Paso, Texas, on Jan. 24, 1921, and raised in Denver, Colorado, Gimeno was the eldest of 10 children. His mother, Marcelina Fuentes Espinosa de Gimeno, was the main provider for the family. His father, he said, drank and gambled.

Gimeno married Irene Arellano on June 7, 1941, in Denver. He and his wife took care of his siblings in addition to their own children.

The couple was expecting when Gimeno decided to enlist in the U.S. Navy. His family supported the war wholeheartedly, partly because they believed it opened doors for employment for Hispanics. And Gimeno believed it was his duty to participate in the war.

“In a way, I did not want to go because of my wife and kids, but I had to go to defend my country,” Gimeno said.

He enlisted in the Navy and completed his basic training in Idaho.

Gimeno says basic training was “a way of life,” with no privacy and bland food. Only two other Hispanics were at the training site, and Gimeno recalled they had to forget about cultural allegiances to focus on being in the Navy.

Gimeno served aboard the USS Yorktown. Because he had grown up in what he calls a diverse neighborhood, he was prepared for the ship's population. He says they were “all Americans; the guys on the ship were my brothers.”

The Yorktown, according to Gimeno, was the only ship in the Navy never hit by a kamikaze, and its crew never missed a strike against the Japanese. Gimeno was in charge of maintaining the machine guns and the bombs on the planes.

Gimeno still remembers the daily routine aboard the Yorktown. The men would wake up at 3 a.m. and have a breakfast of soggy cereal with powdered milk. He said almost all the men worked without complaint and the crew respected hard work.

One day, Gimeno was injured on the ship while unscrewing guns from a battle-damaged airplane. As he worked, a panel flew off and knocked him unconscious. All he remembers is being dragged across the ship, and all he could see was red because of the blood in his eyes.

He was down for two days before regaining consciousness and recalls telling the doctor, “It hurts like hell. Put me down again.” The doctor put him in a drug-induced sleep, and Gimeno woke up a day and a half later.

After the war, Gimeno was awarded a Purple Heart and six battle stars from action he saw in the Marshall Islands, the Philippines, and Japan.

After being discharged as a seaman first class in October 1945 in Shoemaker, California, Gimeno went to work at a cabinet shop back home. He said he liked seeing that people getting back from the war could focus on furnishing and remodeling their homes.

Later, Gimeno moved into the construction business. After some time he ran his own company, which was involved in the restoration of Bent's Old Fort National Historic Site in La Junta, Colorado, a portion of the Santa Fe Trail.

Mr. Gimeno was interviewed by Joseph Padilla in Arvada, Colorado, on June 1, 2011.*

Mr. Gimeno passed away on August 4, 2014. He was survived by his wife, Irene Gimeno, and eight children, according to his obituary.