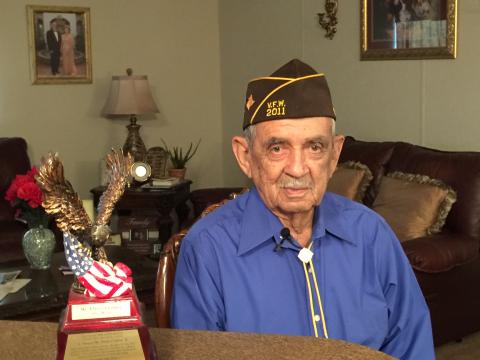 When Eliseo Cremar removed his boots after weeks of frigid combat on the Manchurian border during the Korean conflict, his toenails came off along with his socks.

The men of Cremar’s unit, 2nd Infantry Division, 37th Field Artillery Battalion, were advised to put ice on their frostbitten feet or faces instead of warm water. They were given dry clothes to replace their frozen wet uniforms. Some men lost their ears and noses to frostbite.

Cremar enlisted in the Army in 1948. When his Seattle-based unit was called to war in Korea in 1950, he was told he wasn't required to go. But, he volunteered anyway.

“I had been in the service for almost three years. They want me to stay there [in Seattle]. But I want to volunteer; I want to go with the division,” Cremar said.

Cremar’s parents, Ezekial Cremar and María Perez, from Falfurrias, Texas, had 11 children. Eliseo was born on a ranch called Las Animas on July 14, 1929. He left school after fifth grade to work as a vaquero, a cowboy, roping, breaking in horses and doing other ranch work. When he was 18, he enlisted in the Army.

Cremar has a book with photos from the war, but he admits, "Sometimes I don't want to remember."

He credits Laredo physician Franscisco Cigarroa with saving his feet from amputation after the frostbite. Besides the frostbite, Cremar also suffered from malaria. He spent 14 months at a VA hospital in Houston. He was honorably discharged on May 2, 1952.

After the war, Cremar returned to South Texas and worked on oil rigs and as a ranch hand. He married Rosa Dalia Reyes on Christmas Eve, 1954, and had four daughters and one son.