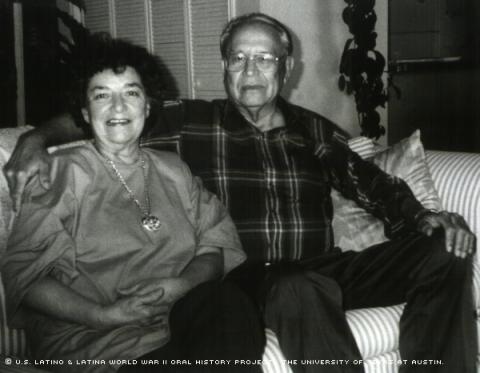 While scores of Latinos valiantly served their country amid discrimination during World War II, many -- such as Elena Gallego of Fort Stockton, Texas -- fought social battles on the homefront.

The wife of a WWII veteran, Gallego remembers prejudice in her hometown: Among other restrictions, the public swimming pool and certain sections of the park and library were off limits to Hispanics, signs in restaurants reading: "No Dogs Allowed" applied to Latinos, and they were only allowed on the upper balcony of the movie theater.

These childhood memories became a springboard for her lifelong struggle against discrimination.

She recalls one indignity at the movie theater, occurring when she was 13. After sodas at the drugstore, she and her sister and friends headed across the street to the theater. But after retrieving her sweater at the drugstore, Gallego was denied sale of a balcony ticket. The ticket seller, convinced she was an Anglo because of her good English and fair complexion, denied her the balcony ticket; she was unable to sit with her group.

Soon, an usher told her the theater manager -- who happened to be the high school principal during the day -- wanted to see her. She agreed, but after the movie's conclusion. Eventually, ushers forcibly removed her from her seat. She explained she’d told the clerk of her ethnicity, but still was sold a downstairs ticket. She then refused a balcony ticket, earning her an eviction from the premises.

When Gallego told her father, Martin Peña, what had happened, he loaded his gun and proceeded to the theater, which was surrounded by lawmen who anticipated some sort of confrontation. Peña was known as a peaceful man, but also for his prowess as a marksman. For whatever reason, he wasn’t barred from confronting the manager, and the lawmen simply dispersed.

At gunpoint, the manager was forced to shut down the theater, which would remain closed for six months. When it finally reopened, people were allowed to sit anywhere they pleased, regardless of background.

"Daddy wouldn't hurt a fly, but he was angry that night," Gallego said.

The same week, Gallego witnessed another distressing scene at the town's swimming pool. Six young men, all military enlistees, went to the public swimming pool only to have the darker-skinned among them denied access. Fellow soldiers, sailors and Marines -- more than 200-strong -- crowded onto a borrowed 18-wheeler that wove its way through town, horn blaring, en route to the pool to protest the next day. The pool also was summarily closed for the summer.

Gallego remembers these as defining events that prompted the Fort Stockton Latino population to put an end to racism in their town. She, for one, didn’t let prejudice discourage her. Instead, it prompted her to become something of a young civil rights advocate. When told to go home after Anglo students left for the swimming pool, she and fellow Hispanics instead requested extra schoolwork. They also refused to take tests they knew were different from those of their Anglo classmates.

After graduating high school, Gallego was one of seven young Latina women going on to college. But she dropped out of college to marry her husband, WWII soldier Pete A. Gallego. Since she didn’t complete her education, she insisted on him attending college: "I'll marry you if you get an education," she told him.

The pair moved to Alpine, Texas, where the environment was as discriminatory as it had been in Fort Stockton. For example, an unwelcoming school system prompted many Latino students not to continue on to high school; Gallego would join the school board in attempts to improve the situation.

Now parents, the Gallegos pushed for integration. Even after weighing the negative personal repercussions their struggle would bring, the family still wanted to be involved. Even their children would recruit friends to push for reform.

The pair also answered a local Catholic priest's call for someone to run an ailing credit union intended to assist the disenfranchised. Without the credit union, Alpine Latinos had to "sign their house away if they needed to go to the hospital" for medical treatment, for example, Gallego said. For 12 years, the Gallegos ran Our Lady of Peace credit union out of their home.

For the first 15 years of the credit union's operation, neither drew a salary but worked as volunteers, both holding down other jobs to support themselves. Once it achieved profitability, Gallego drew a modest stipend of about $300 a month after volunteering 15 years. As her children grew up, she needed to earn more money to pay for their college educations, and got a job at First National Bank.

While the bank's president, who hired her, treated her well, others weren't so kind. After the president's death of a heart attack, the treatment worsened. One day, Gallego went for lunch and never came back. Although her job at the bank was a negative experience, she had earned the money she needed to help her eldest two children go to college.

Gallego then began a 20-year career with the Texas Department of Human Services, the state social services agency, where she helped disburse food stamps and also worked with child protective services and the geriatric department. Her children insisted she retire after she was diagnosed as having colon cancer in 1995; after treatment, she’s free of cancer.

Gallego has lived a life many women of that era thought impossible -- as a force for social change when women, especially Latinas, were voiceless.

Gallego says she’s gratified to see that women today -- of any race -- are more independent. "They are not worried about making it on their own, because I think they realize they can."