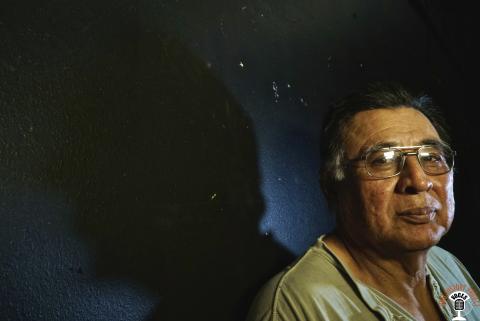 As the son of migrant farm workers, Eleazar Lugo might not have seemed a likely leader of a six-week school walkout in Uvalde, Texas. But in April of 1970, only a few weeks before his high school graduation and with a great deal at risk, Lugo accepted a key role in the walkout, which would have a lasting effect on him and on the school system.

While the walkout helped bring about change in what had been a segregated school system, Lugo said he’s discouraged that it did not inspire political change in Uvalde. There is still no voice for minorities, limited job opportunities, and political apathy among Mexican Americans, he said.

The walkout began on April 14, 1970. Between 500 and 600 Mexican-American students took part to protest discriminatory treatment. The immediate reason for the walkout was to protest the school board’s refusal to renew the contract of a middle school teacher, George Garza.

"The walkout was in support of George, but change of the education system was coming -- whether we walked out or not,” said Lugo, who was 19 at the time.

Lugo was born on July 22, 1950, in New London, Wisconsin, where his parents worked in the fields. His father, Eusebio, and his mother, Elosia, had four sons and four daughters. The family was religious and attended the Assemblies of God, a Pentecostal church, where Garza’s father was the preacher.

The Lugos lived in a primarily Mexican neighborhood, with a few Anglos and African-Americans moving in over time. Growing up in a migrant worker family was difficult. The Lugos would take all of their children with them went they went to other states to work. He recalls the family traveling to Montana to hoe sugar beets on 2,000 acres. Lugo didn’t have to work until he was a teenager, but even as a child, he followed his parents into the fields.

“Being a migrant, the work wasn’t hard, but you put in long days,” he said. “You get up in the morning, you have your breakfast, you go to work. … We had some fields that had mile-long rows. Health-wise, it was good.”

Lugo said teachers often had lower expectations of students from those families.

“Being a migrant, I was classified as a slow learner,” he said. Mostly that was because the migrant students left school early in the spring for the planting season and returned late in the fall, after the harvest was over.

“The classification they put on me was that I was a slower learner, not necessarily being slow, but because I would miss out on so much,” he said. “Two, three weeks in the beginning and at the end.”

However, Lugo broke the stereotype teachers had of Mexican-American students.

“I was an A and B student, mostly As,” he said. “But I never cracked a book. I retained everything. I never studied. I never did my homework after school. I’d get up at 5 o’clock in the morning and do my homework."

Because of his academic success, Lugo was placed with students whom teachers and administrators considered college material. Students in that group were offered more classes. Lugo’s inclusion in that group, along with his extracurricular activities, caused many to look up to him as a potential leader.

“I was considered to be one of the leaders” of the walkout, Lugo said.

Although Lugo felt no fear during the walkout, he recalled the presence of law enforcement agents who were trying to stop the protest.

“We had huge amounts of law enforcement,” Lugo said. “You’re talking FBI, Texas Rangers. They were out here. You learned to identify people.”

According to Lugo, nothing seemed to be gained from the walkout other than a show of support for Garza. In the end, the students who participated would have to repeat the entire academic year or drop out.

Lugo’s future seemed diminished: He would not graduate. But he persevered. He earned his GED and attended St. Edward’s University in Austin for two years before dropping out and getting a job in Uvalde.

“It was a lot harder,” he said of college. “Most of the teachers were nuns and (religious order) brothers. I didn’t feel that was what I wanted.” Plus the school was expensive, he said, and the walkout had killed any chance for scholarships.

Lugo married his high school sweetheart, Maria Robles, on June 30, 1973. They have a son, Eleazar, and a daughter, Marisela.

“My first job after college, I came back home and I got a job with the city,” Lugo said. He worked in the water department for a year. Then he worked for Southwestern Bell Telephone Co. as a lineman and repairman for 30 years, retiring in 2004.

It was hard to get a good job if you were not “in” with the town’s power structure, he said -- a group of political and business leaders

“From the ‘70s, the people that controlled the town still control it today. There’s no industry. There’s a certain amount of jobs, and if you want to have that job, you‘ve got to go by their rules and you can’t say, ‘Well if I don’t get a raise, I’m going to go find another one,’ because there isn’t any.

“I worked for the city for a year, and then I got hired on with the phone company. And I did 30 years there, and that’s one of the few jobs that aren’t controlled by the people in town," he said. Those jobs include working for the phone company, the power company, the city and the state. "Every other job is held by the people that control the town.”

Although Mexican Americans occupy some government positions and segregation is a thing of the past, there is no voice for minorities in the community. The few Mexican Americans elected to office are ineffective, Lugo asserted.

Lugo would like to see some progress but doesn't expect it anytime soon due to the lack of involvement from his community.

“You can count the number of people that are going to be doing anything at any given time because everybody else is apathetic about it," Lugo said. "They don’t want to get involved because of the work situation. They feel like they’re not going to make a change, they’re not really going to create change, if they get involved.”

But he says the closeness of his high school class and the respect from his younger peers are positive results from the walkout.

“I think (the class of 1970 is) more unified with the gringos (Anglos) that stayed in school and got the degree and they don’t look down on us,” he said. “We have get-togethers,, the class of ‘70, the Mexicanos and the gringos. We’re more unified. We’re closer together. There’s no animosity.”

Lugo was interviewed by Jorge Haynes in Uvalde ,Texas, on April 9, 2016.