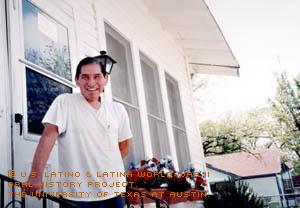 For Edward Vasquez, the war years represented the ultimate adventure for a boy given to impetuous feats.

A Mexico-born mother and Texas father’s middle child of seven, Vazquez remembers being taunted by his older siblings and pestered by the younger ones. As a result, he learned early to find entertainment outside of the home.

Vazquez's father worked as a mechanic during construction of the San Antonio Municipal Airport during the Great Depression. His mother, meanwhile, was a homemaker who Vasquez considers the anchor of the family, keeping the peace among the children while ensuring they were well fed.

"We always had something to eat," Vazquez said. "There were some rough times, you know. But she was always cooking something for us to eat."

The three children born after Vazquez were all girls and they, along with a brother, were the inspiration for some of his early adventures. Before the age of 15, he had twice run away to join the circus. He never traveled beyond San Antonio, but each outing was an adventure away from the routine of home life.

Vazquez had wanted to join the war effort ever since he heard of the attack on Pearl Harbor when he was 14 years old. His brother getting drafted, coupled with his sisters' pestering, further inspired him to want to join.

"That's one of the reasons I wanted to join the Navy, because I was stuck," he said.

Vazquez tried to enlist when he was 15, but lacked his parents’ permission. After he threatened to join the circus for a third time, however, his father relented. And so at the young age of 15, Vazquez entered the Navy.

Vazquez joined other recruits in San Diego for basic training. After that, he was sent to San Francisco for deployment overseas. Though he wanted to be a gunner, his was barred from that duty because of his young age. He was assigned to Carrier Aircraft Service Unit #5 instead.

Once overseas, Vazquez headed for adventures far beyond any circus tent. He first anchored at the Fijian island of Suva.

Vazquez’s duties didn’t include combat, but did include kitchen police duty and working as a mechanic. In the latter role, he was following in his father's footsteps. The job also recalled his childhood, when he first learned to be a mechanic by watching his dad work on cars.

The first enemy fire Vasquez encountered occurred at Guadalcanal. Though he found protection in a foxhole, he also experienced his first and only injury – ironically, at the hands of a fellow sailor. A fellow seaman nicknamed "Frenchy" had neglected to build a foxhole and pushed his way toward Vazquez's, injuring him in the process. During an ensuing shoving match, Vazquez fell into his own foxhole and hurt his back and shoulder.

The injuries were so severe that Vazquez was being considered for a Purple Heart; however, he declined consideration for the medal, noting his injuries weren’t attributable to the enemy.

From Guadalcanal, he sailed to Bougainville. There he came face to face with preparing for combat when after landing at Cape Torokino, on Empress Augusta Bay, the Japanese counterattacked in mid-March of 1944. They broke through the combat lines, threatening the rear area support troops who built a defensive perimeter with barbed wire and smoking cans to hold off the Japanese.

While stationed in Bougainville, Vazquez earned the right to return to the states, one of the first times in his life he looked forward to going home: "At Bougainville, thank God … I got my 18 points in," he said.

"I don't know if it was lucky or unlucky," he said, "because I always wanted to come home."

Only 17, Vazquez had already served one tour of overseas duty. On his 18th birthday on May 23, 1945, he enlisted for his second.

Although World War II ended by the time Vazquez completed his service in the Navy, his time in the military had just begun. After having served in the Navy, he joined the U.S. Air Force, where he says he truly found his niche.

All told, Vazquez served 15 years in the Air Force, bringing his military service to more than 20 years. In his post-war years, Vazquez continued to indulge in his penchant for world travel. For example, he went to Vietnam in 1968 as a helicopter mechanic during that war. The year proved to be a significant one in his life, as he met his future wife, a Vietnamese girl named Anh Ngu. The two married and in September that same year, had their first child, Rosy.

In addition to starting a family in Vietnam, Vazquez also opened a business, figuratively striking gold when he and Anh opened the first Mexican restaurant in Saigon. His wife did the cooking while he acted as waiter and official food taster to ensure the culinary offerings' authenticity.

The American troops' imminent defeat in Vietnam prompted the pair to leave the region. In 1975, they returned to San Antonio.

Once home, they tried in vain to duplicate the business success they’d experienced in Vietnam.

In search of more adventure and economic success, Vazquez decided to move to Iran, leaving his family behind temporarily. By now, the pair had two children, a second child having been born on Christmas Day in 1972.

In Iran, Edward worked for Bell helicopter. Anh and the children later joined him in Iran, but not for long. Sensing something was amiss, the family left Iran just before violence toward Westerners became rampant.

From the money Vazquez made in Iran, he bought a home with three adjacent acres of land in San Antonio. Yet again, he indulged his wanderlust, this time moving to Saudi Arabia in 1980 with his entire family in tow. Anh also worked while there, taking jobs as a babysitter, cook and cosmetologist to British, American, and New Zealand women. The family left after four years and returned to the States, this time for good.

Today, Vazquez can still be found "running away" from home -- doing errands for his wife, who runs a school of cosmetology in San Antonio.

"So I'm mostly working for a Vietnamese," said Vazquez jokingly. "I couldn't believe it; before, I used to have Vietnamese working for me."

Mr. Vazquez was interviewed in San Antonio, Texas, on April 12, 2002, by Andrea Williams.