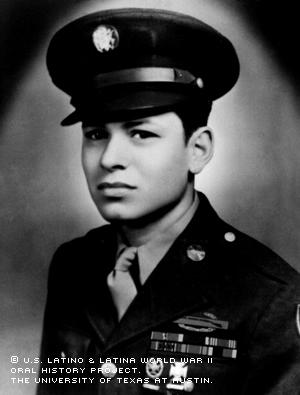 On Friday, Oct. 13, 1944, the 79th Infantry Division was in its 23rd day of battle against German forces in the eastern part of Alsace-Lorraine, France.

Eduardo Botello, in a platoon of 27 men, walked slowly and carefully through the town of Embermenil searching for the enemy, when, suddenly, a mortar shell hit 8 feet behind them. The shell broke into many small fragments. Botello felt one wound to the left side of his neck. A second hit, to the back of his left thigh, was discovered later.

"I shouted, 'Medic! Medic!'' he recalled. "[I] waited a little because there were two more men that had been wounded."

The medics arrived and quickly dressed his wounds before he headed to the battalion aid station. After walking to the station, doctors cut his clothes off to treat his wounds and found a third wound, all the way to the bone. To relieve Botello’s pain, doctors injected him with morphine and wrote a capital "M" on his forehead with a marker, signifying he’d received the powerful narcotic.

"After that, I didn't feel anything," Botello said. "You don't want to fight anybody; you're at peace with the whole world."

Botello arrived at midnight at the tent hospital. He thanked the Lord for letting him live one more day. Perhaps coincidentally, that day, Oct. 13, happens to be the day of his saint, Edward, or Eduardo in Spanish.

"People ask me what I think of Friday the 13th, and I say I think it's a good day," Botello said. "I was reborn that day."

At the end of this battle, only two men out of the 27 in the platoon were left.

Botello’s military experience had begun just after he turned 18. Three months earlier, he’d been a junior at Martin High School in Laredo, Texas.

"I was looking forward to finding out what was ahead of me, even though later I regretted it," said Botello with a laugh.

The timing was particularly difficult for his family. Botello's father, Anastacio, had died of a heart attack Jan. 8, 1943, leaving behind Botello's mother, Abelina Sanchez Botello, and six children. Botello was the oldest. So, at 17, he became the man of the house, attending high school half-days and working the rest of the day as an office boy and bill collector at Herring-Price Lumber Co., which had employed his father. After Botello was drafted, his family began receiving Social Security benefits for his siblings.

Botello was inducted at Fort Sam Houston in San Antonio and went to Camp Gruber in Oklahoma for basic training, where he joined the 42nd Infantry Division. Within seven months, he was an expert with an automatic rifle and a sharpshooter with an M-1 rifle.

Botello moved to Camp Phillips in Kansas and joined Company C of the 1st Battalion, 313th Infantry Regiment, 79th Infantry Division. He was one of two soldiers of Mexican descent in a company of 200.

Soon, he met soldiers who came from New York and Chicago, and some of them called him derogatory names, like "spic." Nonetheless, he said he did his job and earned his decorations "just like any other soldier."

In March of 1944, the 79th Infantry Division arrived in England, where they trained for the upcoming invasion of France.

On June 12, the 79th crossed the English Channel and landed on France’s Utah Beach. The first order was to dig a foxhole -- 3 feet deep, 3 feet long and 2 feet wide -- to take cover from enemy fire.

"We used the 'L-shaped' holes, so I would sleep one hour while my buddy stays awake and then we would switch," Botello said. "We couldn't go to sleep because the enemy would then come and infiltrate you."

On June 14, Botello walked the equivalent of 25 miles with his 30-man platoon across open fields and woods toward Cherbourg, with one thing in mind: to destroy the enemy, he says. Sometimes, that rush of battle meant leaving behind wounded soldiers, in accordance with orders, he says.

Some memories haunted him even 11 years after the war had ended; he’d still wake up sweating and upset after a nightmare.

The nightmares came from real-life experiences on the front.

On Jan. 18, 1945, Botello was shooting from the second floor of a two-story civilian home across the Moder River in Hagenau, Alsace-Lorraine, when a shell hit the house, causing it to collapse. He woke up in a hospital, where doctors told him he’d been injured in the back, right below his neck. He spent 10 days there, and then was sent back onto the battlefield.

"I had to climb this 20-feet-high dike," Botello said. "Then here comes this big German and he has both hands up saying, 'Don't shoot, don't shoot, camarada.' He was giving himself up as a prisoner of war!"

A month later, Botello was again injured -- this time in Duisberg, Germany, when an 88-mm canon from a German tank landed near him, giving him a severe concussion.

"I had blood coming out of my ears, mouth and nose," Botello recalled.

After that incident -- a month before VE Day -- his fighting times were over: Private First Class Botello was assigned to a military government office in Berlin for five months and was honorably discharged Dec. 23, 1945, arriving home on Christmas Eve. By the time his service ended, Botello had earned a Combat Infantry Badge, Bronze Star Medal, the Purple Heart, a Good Conduct Medal, American Campaign Medal, EAME Campaign Medal with 4 bronze stars, WWII Victory Medal, Army of Occupation with Germany award, Liberation of France Medal and the Presidential Unit Citation.

Botello registered at Martin High School and received his high school diploma in 1946. In the fall of 1947, he enrolled in St. Edward's University at Austin. After two years, he decided accounting wasn’t right for him, so he became a Customs officer on the U.S.-Mexico border and served there for 40 years.

In 1972, Botello found 1,213 pounds of marijuana inside the wall of a refrigerated truck, earning him the Sustained Superior Performance award. That was the largest seizure in Laredo for 17 years.

On April 16, 1950, he married Carlota Perez; they have five children, all of whom finished college and live in Austin and Laredo.

Botello is a member of various veterans' organizations, including the American Legion and the Military Order of the Purple Heart.

Mr. Botello was interviewed in Austin, Texas, on October 9, 2003, by Xochitl Salazar.