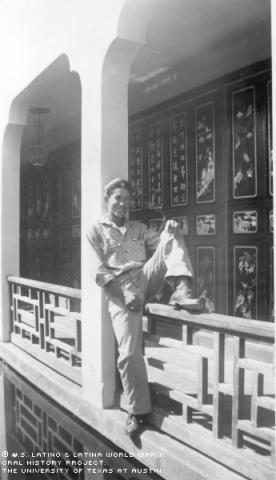 Domingo Zatarian looked on a map and set out to find his brother's division shortly after the Battle of the Bulge had ended in Europe.

And he found him. There was Marty in a ditch, doing the last thing Zatarian would have imagined: singing the song "Swinging on the Star."

"He was singing 'Would you rather be a mule?' or some such thing," said Zatarian, a smile on his thin lips.

Zatarian was one of four brothers from a San Diego family to serve in the U. S. Armed Forces during World War II: Jerry served four years as a foot soldier in the Pacific Theater; George, the eldest of all Zatarian’s siblings, was in the European Theater; and Marty fought in five major campaigns before his brother found him singing in that trench.

Growing up in San Diego to Mexican-born parents, Zatarian enjoyed playing basketball for his team, the Toltecs. His family was Catholic and attended Guadalupe Church every Sunday. Zatarian's father, Martin Zatarian, supported his wife and seven children by working in laundry services. His mother, Angelita Almanza Zatarian, worked in the same field as a clothing presser.

Zatarian graduated from San Diego High School in 1937 and immediately began working in display at a local business called Grand Rapids. He was drafted into the Army in October of 1941.

Zatarian, the second oldest son of his family, said he knew he was going to be drafted well before it happened. He didn’t want to go to war and had no interest in participating in the conflict. Still, he never entertained the thought of leaving the U.S. and fleeing to Mexico. When asked about his recollections of the war now, Zatarian said, "I just like to forget about it, really."

He said, "I just don't like to talk about things in the past."

His wife, Elia Salazar Zatarian, whom he married in 1952, reiterated the fact that her husband is not one to rehash history.

After being drafted, Zatarian said he was sent to the Mojave Anti-Aircraft Range. He remembers his training as consisting mainly of marching and learning to handle rifles. At one point, he was on night watch duty guarding his camp from air traffic and possible attacks on the ground.

During his training, Zatarian took a test so he could enter the Army Air Force. He said, chuckling, that he welcomed this opportunity because he loved to fly. Zatarian was sent to Biloxi, Miss., to begin his flight training.

This training would never come to pass, however, because he was soon sent to England and later to Germany with the infantry. There, he was to fight on the front lines of the Battle of the Bulge, which lasted from Dec. 16, 1944 until Jan. 16, 1945. An unsuccessful attempt to push the Allies back from German home territory, it was the last German offensive on the Western Front during the war.

Fortunately for Zatarian, it ended before he got there. In fact, Zatarian never actually fought in any battle during the war, and recalled seeing only one German soldier's dead body during his stay in England and Germany.

After the conflict ended in Germany, Zatarian was sent to Oahu, Hawaii. His typical day on the Hawaiian base consisted of digging trenches, driving trucks and keeping the camp secure.

Although not a soldier by choice, Zatarian earned several medals for his wartime efforts. The American Defense Service Medal was given to all personnel on active duty from Sept. 8, 1939 to Dec. 4, 1946. Zatarian's other awards include the Asiatic-Pacific Campaign (he was in an anti-aircraft unit), Good Conduct, European African Middle Eastern Campaign and American Campaign medals.

Zatarian was discharged from the Army with the rank of Technical Sergeant in September of 1945, and returned to San Diego.

"I missed everything from home ... steaks, refried beans, tortillas, the shore and, of course, my family," he said.

After his return, Zatarian resumed his occupation as a window trimmer and displayer at another business, Harris & Frank.

In April of 2001, as 83-year-old Domingo Zatarian sat in his over-stuffed leather rocker-recliner, a smile crossed his face and lightened his weathered features as he spoke about the present and his five grown children and 18 grandchildren.

Zatarian also offered a description of what his days consist of now.

Mr. Zatarian was interviewed in San Diego, California, on April 13, 2001, by Rene Zambrano.