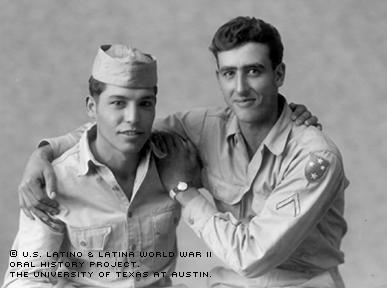 Dennis Baca still cries when he thinks of the friends he lost during World War II. Even now, 57 years after his discharge from the U.S. Army, his voice becomes choked with emotion as he recalls the battles, the hardships and the deaths that marked his days in the South Pacific.

A soft-spoken 76-year-old with a gentle face, Baca is uncomfortable talking about himself or his war experiences. He doesn't see his service during WWII as anything heroic. He was just doing his job, he says.

Baca was drafted in 1942 at the age of 18, shortly after the Japanese bombing of Pearl Harbor. After completing basic training at Fort Bliss in Texas, Baca went through infantry training at Camp Roberts in California.

"It was pretty tough. It was hot, sometimes 100, 110, 115 degrees," Baca recalled. "At the end of our training we had to make a 30-mile hike with a full field pack to see who would make it. Some guys didn't make it. They just collapsed."

Baca says he knew he’d see combat soon, but his platoon, the Anti-Tank 132nd Infantry, was unsure of its mission.

"We got transferred at 2 o'clock in the morning. We didn't know if we were going to Japan or Germany. We didn't know what kind of clothes we needed. It was tough," Baca said.

After a three-week journey at sea, his anti-tank platoon landed at New Caledonia, an island in the South Pacific.

"We landed in barges, you know, in waves. We lost a lot of my friends here in the landing," he recalled.

After a few months on New Caledonia, his unit was moved to the Solomon Islands, a thinly populated and undeveloped area about 800 miles east of New Guinea.

According to WWII historians, the region was pivotal to Japan’s control of the Pacific. Historians believe if the Japanese had controlled the Solomon Islands, along with New Guinea, they would have been presented with a stepping-stone to Australia.

Some of the fiercest battles, including the battle at Guadalcanal, were fought here. Baca's 132nd Infantry joined the campaign on Guadalcanal on Dec. 8, 1942, at Mt. Austen and fought through there and at the Gifu strongpoint. They assaulted Verahue on Feb. 1, 1943; captured Tenaro Village on February 9; moved to Fiji to regroup; and attacked Bougainville in the Solomon Islands on Jan. 12, 1944.

"They gave us machetes to cut through the jungle. It was all jungle, seems like it rained every day," Baca said. "Jungle, swamps and mosquitoes. That's where I saw a lot of my friends get killed. …

"A lot of nights we had to make foxholes, and that's where we'd sleep. The mosquitoes -- they were bad. They gave us mosquito nets to put over our heads and over our beds. There's where I got malaria. That's where I got jungle rot, all over my body."

But Baca's worst memories came from battles. He remembers one battle in which an American patrol followed Japanese soldiers into a ravine, resulting in a disastrous ambush for the Americans.

"The Japanese had a lot of caves in there. And most of my friends got killed," he said. "By the time we got there, it was getting dark and we couldn't go in. We had to wait all night until we could go in to get them out. We could hear them moaning, my friends."

He paused to wipe away his tears, tormented by the memories of that event.

"They had all died by morning. And then we carried them out, down the hill."

He says he became very good friends with many of his fellow soldiers, and that he was seldom singled out or discriminated against, even though he was one of few Spanish-speaking soldiers in his platoon. He does, however, remember one particularly bad case of discrimination.

"I got along great with most of the guys," he said. "But there was one lieutenant, Paul Silvers, who just didn't like me. He got into me and he just wouldn't let me up. He always gave me the worst details. Maybe it was because I was Hispanic. I could have been a sergeant or a corporal. But no promotions for Hispanics, I guess. He didn't even put it down that I got wounded. He kept me from getting a lot of things I'm entitled to.

"I went in a private and I came out a private," said Baca, choking back tears.

Baca believes the lieutenant's treatment kept him from receiving the Purple Heart. He says he was wounded in the left shoulder blade by shrapnel, but claims the lieutenant didn’t note this in his file.

In spite of his several brushes with death in battle, Baca says he became most concerned for his life when his unit began making preparations to invade the Japanese mainland in 1945.

"We were in the Philippines. We got ready to hit the mainland in Japan in August 1945. Then, they threw a bomb at Hiroshima and Nagasaki and the Japanese surrendered," said Baca, who notes the invasion of Japan would have cost the lives of a great many American soldiers.

Life would never be the same for Baca. When he arrived, there were no ticker-tape parades, no grand celebrations planned. Without fanfare, he was discharged from the Army on Dec. 3, 1945, and returned home to Albuquerque, N.M.

"A lot of things had changed in three years. It was hard to get a job until I started working at the VA. My folks didn't recognize me because I was yellow from malaria. It took me years and years to get over it," Baca recalled.

The war had left physical and emotional scars on him. He says he worked for many years as a nursing assistant at a VA hospital, but often was plagued by bouts of depression and anxiety while on duty.

"That's one thing you never forget. You know, sometimes, when I think about it, I just start crying. I saw a lot of my friends get killed and it still comes back to me," Baca said.

Sometimes he cries for his enemies, too.

"I know I killed a lot of them. I hate to say that but it was our job. I don't know how we made it. I guess God was with us. That's one thing I believe in," Baca said.

After years of medication and ongoing counseling, he’s now able to talk about his war experiences.

"We were Spanish but we were proud to serve our country. I'd do it again," Baca said. "I'm too old now but I'd do it again. We love this country. We're Americans. We should fight for our country because this is the best country in the world. There's no other country like this."

Mr. Baca was interviewed in Albuquerque, N.M., on November 2, 2002, by Violeta Dominguez.