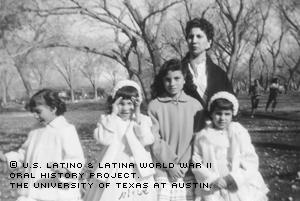 Delfina Lujan Cuellar grew up in Albuquerque, N.M., at a time when girls were expected to become mothers and wives. Like many Mexican American girls of her generation, she wasn’t allowed to attend school after the eighth grade.

"We were very deprived of getting more education," Cuellar said. "They thought that we would be too free and have babies before marriage and things like that, and so I didn't go to high school."

After she left school, Cuellar stayed home and helped her mother, Dolores, as well as helped neighbors clean houses. Later, when she was a little older, she worked part-time as a doctor's receptionist.

"My mother was very strict, being that she was raised by the nuns," she said. "They wouldn't let us listen to the radio much. I could see the girls having dates. We were deprived of that."

Cuellar was born May 8, 1925, and spent most of her childhood in the care of her grandmother. Her father was an only child and her paternal grandmother wanted another kid to rear. Cuellar wasn’t deprived of her mother's influences as a child, however.

"My mother lived just across the street," she said.

Growing up during the Great Depression, Cuellar didn't experience the hardships most Americans suffered.

"To tell you the truth, it wasn't too bad for us," Cuellar said. "I mean, we had a good life. My dad [Benito Lujan, a railroader] was working all the time."

That isn’t to say Cuellar wasn’t aware of the economic devastation around her and her four brothers and three sisters.

"There were some people who had a very hard time," she said. "Once in a while, people would come and ask Mother for a cup of this and a cup of that.

"My mom would help people that needed food and whatever," she said.

After her grandmother died, Cuellar moved back into her mother's house at age 16. That same year, the Japanese attacked Pearl Harbor.

As it so happened, her future husband, Louis A. Metzgar, was serving there. He’d be in the Army between 10 and 12 years.

Cuellar vividly remembers the war and how it affected her neighborhood.

"It was very scary," she said. "We would hear about so many people that we knew. Their sons were killed. There was a lot of grief."

And when the war came to a close, in August of 1945, jubilation ensued.

"There were flowers and flags when the world was at peace," Cuellar said. "It was beautiful when the war was over. Everyone was praying on the streets, singing. That I remember."

But there was little happiness on the home front. For one thing, Cuellar found married life unsavory.

Although Cuellar says her first husband was a good father to daughters Yolanda and Lois, she couldn’t endure the marriage. In 1963, much to the disapproval of her Catholic mother, Cuellar divorced Louis Metzgar.

"My mother didn't like it at all," she said, "but, at the same time, she knew a lot about his kind."

After her divorce, Cuellar says she had trouble adjusting to her new single life.

"I have terrible dreams at times about my life when I was alone after we divorced," she said. "It's very scary."

Cuellar remarried in 1993. Joe Cuellar, like her first husband, served in the Army during WWII.

Cuellar says she’s sad her mother, who died in 1975, never got to meet the man who has made her so happy.

"I would have been so glad if she would have met my second husband Joe," she said, "because she didn't like the first one."

Cuellar knows all about the negatives of not getting a full education. She says she has never been very social because she didn’t go to high school and, even now, has difficulty verbalizing her thoughts to others.

She’s glad to see that girls nowadays, including her own daughters, Yolanda and Lois, are able to experience the education of which she was deprived.

"Now they're free to talk, to be whatever they want," Cuellar said. "Like my girls, they got educated and they're doing good. Their dad was very well educated and they could see the difference."

Even Cuellar's sister, Gloria, who’s eight years younger, was able to attend high school; by then, it was more acceptable for women to pursue an education.

"Things were then a little bit different," Cuellar said.

Despite being denied an education and having to endure the pain of being married to an alcoholic, Cuellar has finally found contentment through her second husband Joe, and at the age of 77 she continues to make herself happy by reading and being with the man she loves.

"I'm very happy with Joe,'' Cuellar said. "I hope he never changes. And I don't think he will."