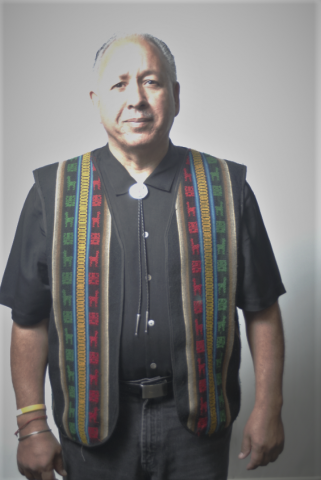 After almost getting his eyes blown out of his head by a mine in Vietnam, David Valladolid was hospitalized for three months. He lay flat in a bed in a hospital in Saigon for 30 days; doctors feared that if he moved and began to bleed, he would go blind. Today, doctors still say it is a miracle that he regained 90 percent of his eyesight.

David John Valladolid was born in Oxnard, California, 60 miles northwest of Los Angeles, to Genaro Eduardo Valladolid and Rita Virginia Torres-Valladolid on June 22, 1948. When David was only 4 years old his father died, leaving his mother to raise five children alone. She decided to move to Fresno, California, 226 miles north of Oxnard, to be closer to her family so they could help raise her three sons and two daughters. The whole family later moved south to San Diego.

Valladolid's mother worked long hours as a nurse and later became director of a community outreach nursing program in a clinic in San Ysidro, a district of San Diego next to the Mexican border. During those years, everyone in the family had to do their part to help, and Valladolid's sister Ana took the role of a second mother to fill the gap. David often took out the trash and did chores to get attention from his mother.

The prolonged absence of an adult at home caused tension among the siblings. David and his older brother Jerry would often get into fights because David was the protector in the family. When Jerry would beat up on the youngest brother, Tony, or get into fights with his sisters, David would confront him and ask why.

When Valladolid was 11 years old, he began working after school to earn money to help his family. During his teen years, he spent every summer working for his uncle, who owned a painting business. His uncle would pay his mother the money he earned throughout the summer.

Throughout those difficult years, family and other people in the community greatly helped the Valladolid family. His grandparents helped put food on the table when money was low, and there was a grocer who let the family run a tab and never collected on it.

The Valladolid siblings all attended Catholic schools in San Diego; David did four years of his elementary school at St. John Evangelist School and later went to St. Augustine High School. His mother talked to the priest and explained that she had five children and could not pay for all of them to attend Catholic school. He agreed to let all her children attend the school for the price of one.

Valladolid was drafted into the military in September 1968, right after graduating from high school. His family encouraged him to go to Mexico or stay in college to avoid being sent to Vietnam. His older brother, Jerry, who had already gone and returned from a tour, strongly advised David not to go. But Valladolid’s attitude was that people had to go, and he felt he was in a better situation than others to go because he did not have children or a wife.

After going through training in Fort Ord and Camp Roberts, California, Valladolid was assigned to the 199th Light Infantry Brigade. He became a radioman by chance, after helping an exhausted fellow soldier by carrying his radio for eight hours and being judged to be good at that duty.

In Vietnam, Valladolid found that his access to the radio equipment made him a "lifesaver" because he could control the messages that reached his unit. When he found that the orders sent by Army officers were too risky, he could "clog" the radios to avoid putting the lives of fellow soldiers in unnecessary danger.

One example was when officers told the men to look for the bodies of dead Viet Cong so that they could report a high body count. Valladolid said the search would have jeopardized the men, so he “clogged” the radios so that the men would not follow that order. According to him, getting yelled at the next morning was better than following orders he didn’t believe in.

But reckless orders were not the only thing putting Valladolid's comrades in danger. During his tour of Vietnam, he realized that many Puerto Rican soldiers he served with had trouble communicating with officers in English.

“I saw that as total discrimination,” said Valladolid. One particular soldier from San Juan, Puerto Rico, got separated from the group often. When trying to find his way back to them, he was almost fired at because U.S. soldiers thought he was the enemy trying to sneak up on them.

Valladolid later found out that these Puerto Rican soldiers were part of “Operation 1000,” a government operation the U.S. government passed when they ran out of draftees from the mainland. The military decided to take soldiers who had not passed tests or did not know English, putting them in great danger in Vietnam war zones due to their inability to communicate.

One day in July 1969, Valladolid saw a dead North Vietnamese soldier with grenades attached to his body. He reported it to his superiors and was ordered to remove the grenades and detonate them to make sure that the North Vietnamese would not be able to use them against U.S. soldiers later on.

As the U.S. soldiers walked over to the body, Valladolid saw a stack of rocks and started screaming for the team to stop. He knew that the North Vietnamese communicated with each other by leaving signals, like stacked rocks, so that others on their side would know to avoid certain areas because there were mines.

Just as he began to yell, a Claymore mine exploded, sending Valladolid and the other soldiers flying through the air. Valladolid was badly injured; his eardrums were blown out and his eyes were badly damaged by the blast. Claymores are anti-personnel mines with a casing containing 700 steel balls, which shoot out like shotgun pellets when the mine explodes.

After the explosion, Valladolid was taken to a hospital in Saigon and stayed there for 30 days. He was later sent to Ryuken Hospital in Okinawa, Japan. His face was bandaged for three months, and doctors were unsure if he would ever see again.

“I went through those self-pity kind of situations of saying why did this happen to me and how was I going to deal with this,” he said.

But once the bandages came off and he realized he could see again, he decided to go to church at the hospital.

He was standing in the back of the church when a young man entered the church in a wheelchair. Both of his legs were amputated, and one arm and half of his face had been blown off. He asked Valladolid to take him up for communion. On their way up to the altar, the young man looked back at Valladolid and told him how incredible it was to be alive. Valladolid said that any sense of self-pity left him that moment and has never come back.

When Valladolid returned to the U.S. in 1970, he became very involved with the Chicano movement and Vietnam Veterans Against the War. He made public speeches about Agent Orange and about how veterans were not going to tolerate the hostile conditions they were coming home to.

Back in California, Valladolid resumed his studies at San Diego State University, where he graduated in 1975 with a bachelor’s degree in public health. After college, he became involved in public service at the local and state level, working in a variety of advising and administrative positions with the San Diego Police Department, the San Diego Unified School District and the California Legislature.

Valladolid was also involved in electoral politics. He worked as chief of staff for Assemblyman Pete Chacon, the first Mexican American to represent San Diego in the state legislature, and after Chacon retired, Valladolid ran for the same seat.

On Sept. 23, 1980, he married Teresa Luna Pascual, who worked as a labor relations advocate at San Diego State University.

Since 1996, Valladolid has been the President and CEO of an education advocacy organization called Parent Institute for Quality Education. PIQE, founded in 1987, has the mission of helping parents develop the skills necessary to establish productive partnerships with educators and school administrators.

Mr. Valladolid was interviewed by Henry Mendoza in National City, California, on June 7, 2010.