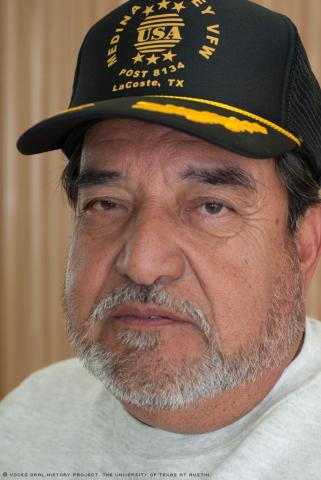 As the first rays of sun peeked over the horizon, Daniel Hinojosa slowly opened his swollen, mosquito-bitten eyelids. The familiar sight of thick, damp jungle surrounded him. Inside his Army boots, Hinojosa felt the sickening squirm of leeches that had snuck in through his shoelace holes while he slept. Soon his fellow soldiers awoke, and the morning routine of plucking the small, black bloodsuckers from each other commenced. It was just another day as an infantryman on patrol in 1969 during the Vietnam War.

"It was very hard," Hinojosa said. "We'd be out in the jungle days at a time. [It was] rainy most of the time and miserable. But it was a job that had to be done. You were trying to stay alive and taking care of each other."

Hinojosa attempted to enlist in the Army straight out of high school in 1968 but was rejected after he mentioned his heart murmur and asthma problems to the recruiter. He said that, at the time, everyone he knew was joining the military.

"It was kind of something you had to do," Hinojosa said. "It was something that I guess was expected of you."

A few months after being turned away, the young Hispanic from San Antonio got a draft notice, and by November he was on a plane to Fort Bliss in El Paso, Texas, for basic training.

"I started laughing," Hinojosa said, describing his reaction to receiving a draft notice. "I didn't think they were going to take me. In a way, I'm glad they did because a lot of my brothers were military. They would make fun of me when they knew they wouldn't take me. So finally I got in."

Hinojosa grew up with 11 brothers and sisters. Two of his older brothers, Joe and Alex, were in the Army between World War II and the Korean War but neither saw combat. Another brother, David, was in the U.S. Air Force and then the Marines during the early 1960s. And his brother, Elias, also served in the Army during the Vietnam War.

Hinojosa lived in the same house in San Antonio for his entire childhood. But he remembers having faced a lot of discrimination for being Hispanic as he grew up.

"There were places we would go in and they would just ignore you," Hinojosa said. "You'd sit down. And they'd serve everybody else. Then they'd serve you."

Because of the discrimination in San Antonio, the prejudices he experienced in the Army did not surprise him.

"It was nothing new," Hinojosa said. "Very few guys really had choices, and those who did have choices were not Latino or Black and that was very visible."

Hinojosa was assigned to Charlie Company, 1st Battalion, 506th Infantry Regiment, 101st Airborne Division in South Vietnam from July 1969 until the summer of 1970. When he got the orders to ship out, Hinojosa decided not to tell his family. For months, his mother and father thought he was safely stationed in Germany.

In January 1970, five months after Hinojosa landed in the war-torn jungle, his younger brother, Elias, a private first class in the Army infantry, arrived at his base camp. He also had been drafted.

"What was so unusual about it was we were sent to the same unit, the same battalion, the same company, the same everything," Hinojosa said.

The military was apparently unaware that the two boys were related, Hinojosa said. It was extremely rare for brothers to serve in the same unit after all five Sullivan brothers perished during a World War II naval tragedy in the South Pacific.

"It was scary on both parts, me with him and him with me, thinking: 'What if something happens to one of us?' " Hinojosa said.

Soon after his brother's arrival, Hinojosa's mother found out the truth about where he was stationed. By that summer, her health deteriorated to the point that the American Red Cross facilitated the two brothers' return home on emergency leave in March 1970. Hinojosa said his mother got sick with worry from having two of her sons in a combat zone. Her health improved within days after the return of her sons, he said.

Hinojosa stayed with his mother for about three weeks before flying to Fort Hood in Killeen, Texas, to complete his service. His brother, Elias, was sent back to South Vietnam. Both were honorably discharged. Neither was seriously injured in the war.

The highest rank that Daniel Hinojosa attained was sergeant. Among the medals he was awarded were: a Combat Infantry Badge; an Air Medal; a National Defense Service Medal, and a Vietnam Service Medal with two bronze service stars. He was discharged on Nov. 17, 1970.

After his military duty was over, Hinojosa began working in the insurance industry. Over the next 15 years, he married three times and had two children, Daniel, in 1971, and Janiel-Rose, in 1986. He did not tell people about having fought in Vietnam.

"For the longest time, I never told anybody I was there because people would look down on you," Hinojosa said. "You didn't even want to say you were in the Army."

During the '60s and '70s people were not interested in hearing the stories of Vietnam veterans, Hinojosa said. By the turn of the 21st century, those sentiments had changed. Hinojosa now proudly exhibits bumper stickers on his car with his unit number and talks to schoolchildren about his time in the military.

"Back then, no one even asked or wanted to know about Vietnam," Hinojosa said. "Now they specifically ask for Vietnam vets, because they're curious about it."

Hinojosa said he enjoys talking with children about the war. It is a kind of therapy to share his stories, especially because the children seem genuinely interested in them, he said.

"It makes you feel good," Hinojosa said. "We always had it bottled down, and now we are letting it out."

Hinojosa was diagnosed with post-traumatic stress disorder five years before his interview but said he had symptoms of PTSD since the war.

"I have crazy dreams," he said. "Sometimes for days, I only sleep an hour or two. I get very antsy, very panicky sometimes."

But Hinojosa said he did not hold a grudge about having been sent to war.

"I'm not angry at anybody," Hinojosa said. "I was ordered to do something, and I followed orders, completed my time, and got out."

Mr. Hinojosa was interviewed by Amy Bingham in Castroville, Texas, on Nov. 6, 2010.