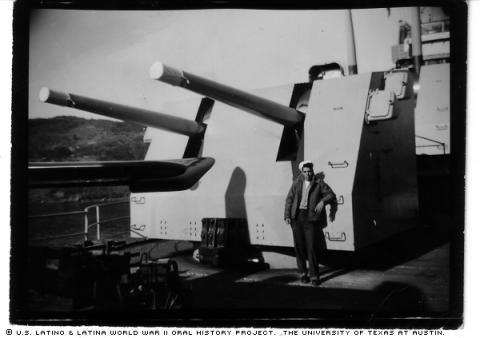 Dan Muñoz, Sr. grew up in the small community of San Fernando, Calif., a town that was segregated by race. At that time, he couldn’t even go to the white part of town after dark to go to a movie house without the fear of being arrested. Today, he’s the publisher of La Prensa San Diego, a newspaper that allows his words to be read by nearly 35,000 readers every week.

Muñoz was born in 1927. He says he had a childhood that never led him to believe he’d one day be the editor of such an influential publication. His elementary school days were stressful due in part to the Depression, and his opportunities were constantly limited by the blatant racism rampant in San Fernando at the time.

"It was where I was raised. It was beautiful, but unfortunately San Fernando was a very segregated city at the time," Muñoz said.

The segregation made his future uncertain. His father, who was uneducated, managed to support the family by picking oranges in the Sunkist Corporation orange orchards that surrounded the Mission of San Fernando Valley. Muñoz foresaw his future in his father: condemnation to working in the orchards. Muñoz recalls his father always said no "Mexicanos" could work in the factories downtown because those were "white men's jobs."

"We were immediately programmed to go to the fields," Muñoz said.

Times were tough, he says, and work had to be found where it could. When he was still too young to work, he recalls being sent to hunt rabbits and collect leftover vegetables and fruits from local grocery stores. He says he never knew life could be any different.

"It was all racist," Muñoz said. "I thought that was the way it was supposed to be."

In elementary school and high school, he worked hard to stay ahead of his classmates. And as World War II continued, he realized he’d soon be drafted into the Army, even if he was two years shy of the legal draft age of 18.

"In those days, the Army wasn't very careful about the age of Mexicanos," Muñoz said. "If you could eat and you could walk, they took you right in."

In 1945, at the age of 16, Muñoz made the choice to volunteer for the Navy along with two of his friends. His decision to enlist was influenced by his brother Elias, who’d joined the Navy earlier but had been wounded in an amphibious landing in Guadalcanal.

Muñoz says it was his time in the military that ultimately brought about a new awareness of the depth and ferocity with which segregation affected his life.

During elementary school, Muñoz says he attended classes with only Mexicans and blacks. Throughout his adolescence, he lived a segregated life apart from white children. In the military, though, everyone suddenly was on the same level.

"It was the biggest shock of my life," Muñoz said. "They took us into the mess hall the first day, and I had never eaten steak before."

"That's when I found out what racism did to us," Muñoz said.

The food that was a more common part of a white man's diet was too rich for him, and it took him quite awhile to get used it, he says. At home, steak was a luxury his family couldn’t afford.

Muñoz played several instruments in the Navy band and orchestra, so his talents with music combined with his natural intelligence made his superiors take notice. Before long, he was pulled off of his ship and sent to train at Radio Code and Teletype school.

He learned to operate code machines and was soon copying 24 to 26 code words a minute, when the average person could only do 16 to 18. Soon, he was given top-secret clearance and sent to work in Hawaii under the commander-in-chief of the entire Pacific fleet.

Muñoz worked in communications as a Radioman 3rd Class for the rest of his military duty, which ended in 1947. Among the awards he earned for his service are the American Campaign Medal, American Defense Medal, World War II Victory Medal, National Defense Service Medal with one star and Good Conduct Medal.

After the war, Muñoz went to Bakersfield, Calif., where his parents had moved. He was discharged to the Naval Reserve in order to complete his term of enlistment. He began working for Western Union and was transferred to Prescott, Ariz., where he met and married Lydia Hernandez in 1949. Phyllis, his oldest daughter, was born while he and Lydia were living in Prescott.

His family life, however, was delayed when war broke out in Korea, and he was called back to the Navy in 1950. He served on the USS Princeton CVA 37, an aircraft carrier; on the USS Bon Homme Richard CVA 31; as Staff Commander with Carrier Division 7; and Staff Commander with the Naval Forces Pacific Fleet. In 1954, at the end of the Korean War, he was assigned to various shore-duty peace missions.

During the Vietnam War, Muñoz's many assignments included tours on the USS Wedderburn, USS Chevalier and USS Morton. He also served as an instructor on code encryption machines at the Fleet Training Center in San Diego.

During Vietnam, he asked Commander Allen M. Shinn to release him from active duty, but the request was denied. His military duties had taken a toll on his family life, he says.

"I would risk losing my wife, who was having serious problems raising my children, who were all attending schools from elementary to high school," Muñoz said. "He refused to allow me to leave."

After a few months of consideration, Shinn allowed Muñoz to go on the inactive duty list. Finally, in 1969, after 22 years of service, he was allowed to return to civilian life.

After his time in the military, Muñoz became a professor of Chicano studies and Mexican culture at Mesa Community College. It was there that he began developing the idea for a newspaper to give a voice to Mexicanos in San Diego, and to help educate readers about problems in the Latino community. On the La Prensa Web site, Muñoz talks about how the paper was born:

"I began crafting a newsletter in my office. It was called Tezozomoc Speaks. In the manner of Benjamin Franklin, I became a 'pamphleteer' that spoke strongly against the injustices, racism and discrimination that was being carried out against the Latino community."

The newspaper was developed directly from these pamphlets. It has since turned into a well-known publication that provides news, information and entertainment to San Diego's 310,752-strong Latino population.

Muñoz's strength throughout his life has been his ear for stories, from listening to his father's experiences to catching bits of code in the Navy. He now keeps his ear to the pulse of this growing community.