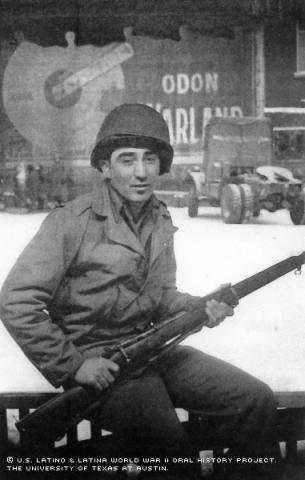 Ceprian Armijo started working on nearby farms with his father in his hometown of Avondale, Colorado when he was at about 8 years old. Little did he know that nearly ten years later he would be going off to fight in World War II in Europe.

Armijo spent most of his time in the war moving through the European mainland, experiencing the realities of war that most people only hear about. Despite being seriously wounded and witnessing the death and destruction of the war, Armijo can now look back upon his WWII experiences as a time of growth.

Armijo's father, Francisco Armijo, was a farm laborer for a cattle company, and later worked at the Pueblo Army Depot in Colorado. Armijo's mother, Modesta Gallegos Armijo, was home-schooled by her father and spent much of her time devoted to her children and the Catholic Church.

Armijo helped his father by cultivating crops and assisted his mother by baby- sitting his younger siblings. He began working full days when he was 8 years old, which later forced him to drop out of school after the eighth grade because it became too difficult to juggle classroom and field work duties.

Armijo remembers hearing news about the war on a battery-powered radio that his father had out on the fields. In July 1942 he was drafted. His younger brother, Ben, was drafted five months later.

"The only thing I thought is that I might not make it, you know. I knew I had a bad right eye," Armijo said.

Armijo had astigmatism in his right eye, the eye used to site a rifle. When he went to get his physical, the doctor thought he was faking his condition so that he would not be drafted. Armijo passed the exam and went straight to Fort Carson, near Colorado Springs.

Armijo was at Fort Carson for a little more than a year and because he wasn't too far from home he was able to visit often. He was shipped off to Fort Mead in Maryland and then to the point of embarkation in New York, before finally being sent overseas and arriving in Liverpool, England.

He arrived at Omaha Beach in Normandy about a month after the D-Day invasion in June of 1944. This was Armijo's first experience with the aftermath of a big battle. He recalls marching to a receiving station on his arrival.

"You knew you were in battle because you could see German soldiers laying by the road or something," Armijo said. "Anybody that says it doesn't scare you ...[they're] lying."

Armijo had been trained for about 15 months at Fort Carson and in war games in Louisiana, which helped when he finally experienced combat for the first time in St. Lo, in Normandy. He spent a year in St. Lo, which is hedgerow country. Getting through hedgerow country was a daunting task because it entailed jumping through a big maze of hedges and knowing the Germans could be on the other side, he said.

He was acting as squad leader when he was told to move out of the area, but as his squad moved up the road, the Germans arrived. After one of his soldiers was hit and sent back, Armijo was left with only one other gunner. They took over the deserted German village and moved on to the outskirts of another village. He went to digging near an embankment to set up his gun, when he heard artillery start to fire. It was November 17, 1944.

"Then I felt a sharp prick. I had fallen down," Armijo said. Another soldier asked him if he was OK and that's when he realized he had been hit.

Armijo was struck by an artillery shell in the back of the left chest.

"It was an artillery shell, so I had a few other small pieces of shrapnel there," he said. Armijo's wounds required extensive treatment, so he was shipped to Amsterdam for treatment. But at Amsterdam, it was determined they didn't have the equipment.

"My wound was close to the lung and they didn't have the equipment to probe," he said. "They were afraid to puncture a lung or something."

Armijo was finally treated in Belgium and released the following January; he was sent back to the same unit at the Ruhr River in Belgium, rejoining his unit Feb. 8, 1945.

Many Germans were surrendering at that point, and Armijo was given orders to take them back to the village. After arriving in Germany, his unit went through the vast countryside finally arriving at the Elbe River where he heard that the war had ended.

Armijo ultimately guarded an ammunition dump in Bremerhaven, Germany, where his division had headquarters. He finally left Europe for the United States, and arrived in New York on October 11, 1945. Armijo was 24-years-old, the most senior man in his company at the war's end.

Armijo surprised his parents with his arrival in Avondale. He married soon after returning home on December 10, 1945.

Armijo had known his wife, Eliza Autobee, since he was 8 years old. They have had three children together -- David, Gloria Jean, Timothy -- and have helped raise one of their grandsons, Quinten. He remembers feeling the way his parents must of felt, when his eldest son, David Gregory Armijo went to war in Vietnam.

Armijo joined his father at the Army Depot in Pueblo, Colorado, after the war. He worked in a variety of positions -- laborer, forklift operator, supervisor of the shipping section, supervisor of a warehouse and as shipping and receiving section supervisor. He retired in April 1979.