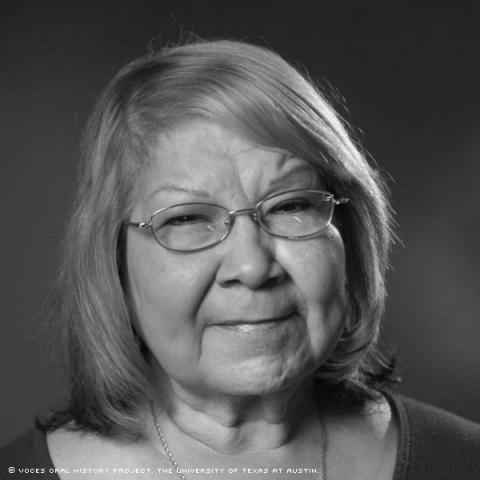 Carolyn Garcia has lived by the words her father shared with her when she was only a child: "God gave you a voice. And if you don't talk for yourself or for others, then what good was it that he gave you a voice? You see there's people, the oppressed, people that are afraid to speak up. Mijita, you speak up for them."

For Garcia, it was the Mexican American children of Dilley, Texas, that needed her voice. By serving on the local school board for three years, she ushered in reform that struck down barriers for young Mexican Americans and made their dreams attainable.

Garcia was born on Oct. 5, 1941, in Campbellton, Texas. Her father, Eustaquio "Taqito" Contreras, was a subcontractor building homes. Her mother, Rosa Rosales-Contreras, was a cashier at a large grocery store named Sam's in San Antonio. The couple had six children; Carolyn was the fifth.

Carolyn Garcia helped her husband run Garcia's Cafe, a family restaurant in Dilley, Texas, a small town about 70 miles southeast of San Antonio. Train tracks ran through the town; the Anglos lived on one side of the tracks and Mexicans on the other. When Garcia's two children began attending school in the early 1970s, she joined them for lunch hour and started noticing that the deep-rooted segregation was evident even in elementary school.

Adding injury to insult, many Mexican parents in the community who knew Garcia because of the restaurant brought their children to her, showing marks the youngsters suffered from being hit on the ankles and behinds with sawed-off bats in physical education classes. Garcia went to the school board with concerns about these issues, among others, but made no headway. There was only one Mexican American on the school board, and even he was not working to improve the conditions for Mexican American children.

"I figured the only way I'm going to make any changes is I need to get in there myself," Garcia said.

That's exactly what she did. While her husband, Arnold, ran for mayor, Garcia and two other Mexicanos, Pete Dominquez and Steven Martinez, put a slate together and ran for the school board in 1976. She and her co-runners sold food plates of tripas (beef tripe) and fajitas (skirt steak strips) to raise money for campaign equipment and posters, and because many of the Mexicans who lived in Dilley were not registered to vote, Garcia went house to house to get the job done.

"I knew everybody in Dilley because I was one of the owners of the restaurant, so the Mexicanos all knew me. They all respected me as well as I did them, and I would go to their homes all the time," Garcia explained. "I would tell 'em, 'You know, we have problems in the community, but if we don't vote, they're not going to listen to you. Your vote is going to make that one difference.'"

As if talking the Mexican Americans into registering to vote wasn't hard enough ("our people don't like to get involved in anything like that"), when election time rolled around, Mexican Americans faced difficulty in the voting process. Some received damaged ballots and others were later summoned to court, accused of voting multiple times because they had similar or shared names with other Mexican Americans in Dilley. Anglos began complaining that "Guadalupe Gonzales" voted three times, she said.

But, in fact, "Guadalupe could be either a girl's name or a boy's name," she said. In addition, "there were juniors and seniors."

Many Anglo leaders even filed petitions for injunctions "so we would not be able to hold meetings and [for] having our elders appear in court," she said.

"We had to bring those people to court" to show they were not illegal voters, she said. They had to show their Social Security cards and prove they were a Jr. or a Sr. The process dampened voter enthusiasm.

"When you start bringing 50-, 60-, 70-, 80-year-old people to court who have never in their history stepped foot in a court, do you think they want to come vote for you again?" she asked rhetorically. "It's embarrassing to them. They'd never broken the law. 'Why am I going to court? What do they want?'"

Despite the odds stacked against them, Carolyn Garcia and her two running mates won the election. They then decided she would run for school board president because "we would have the majority of votes and would have no problem to set the motion in place and a second would get the action approved as needed."

She was elected to the office and wasted no time making changes she felt were long overdue.

Garcia started by relieving the Anglo superintendent, who doubled as head football coach, of his duties. "The coach/superintendent was a football coach and was well-liked by the Dilley fans; his teams won many games as well as basketball, track and cross country," she said. "But he was a coach."

She preferred someone who would be focused on education and so replaced him with a Mexican-American superintendent, Alfonso Obregon Jr. from Pearsall, Texas. She also worked to hire more Hispanic teachers because she felt that Mexican-American children needed role models to look up to.

"We even hired a Mexican-American band director," Garcia recalled. "A little boy walked up to me one day and told me, 'Does that mean I can be a band director one of these days?' because he saw that this Mexicano was a band director. And I told him 'Sure! You can be anything you want to be.'"

Many Anglos did not take kindly to Mexican Americans being in charge. Everyone in town started coming out to the school board meetings, and Garcia said the meetings got so out of hand that she requested law enforcement. Initially, the presence of U.S. Marshals, police, the sheriff and even FBI agents was welcome. But some law enforcement officers themselves became more of an impediment to doing business than ensuring the peace.

Despite the craziness, Garcia maintained a level head and remained focused on doing what she was elected to do: create the best educational environment possible for the children of her community - even when worse came to worst.

"We were in a school board meeting and we had just started, and a lady walks around this side, comes and stands right in front of me... and reaches across and slaps my face," Garcia recalled. "As she slaps my face ... I hear my mother's voice: 'Mija, que hay una tonta y no dos.' Let there be one fool and not two. Because I wanted to reach over and ... do something to the lady because my cheek was burning."

"I got the gavel and went dah, dah, dah, 'This meeting will come to order. Sheriff, please remove the lady from here. We need to continue our meeting.'"

That was as bad as it got. From that point on, meetings were relatively peaceful, so peaceful, in fact, that attendance dropped - if there was going to be no drama, it wasn't as interesting for some.

But there had been enough turmoil that one Anglo member of school board asked Garcia, "When is all this going to end?" He was referring to voters having to go to court to prove their identity and to having U.S. Marshals at meetings.

After four years on the school board, Garcia was satisfied with the changes she had made. Obregon, the superintendent she had brought in, initiated several good programs, including one that paid college tuition for teachers' aides so they could go on to become teachers.

"He made a lot of good changes for the good of the community. We're very grateful that he did come to help us out," Garcia said. "Once we got them all going in the right direction, we thought 'OK, they'll be OK and now we can go on.'"

At the time of her interview in 2015, Garcia was 73 years old. She was working full time as the regional director for the Migrant and Seasonal Farmworkers Program, a federally funded program that provides daycare for children who are 6 weeks to 6 years old and whose parents work all day in the fields. Her work requires her to travel constantly through eight states. She has worked for the program for over 30 years.

"It's very interesting," Garcia pondered, regarding her activism in public service over the years. "Once you're in there, it's like it's in your blood and you can't let it go."

Ms. Garcia was interviewed by Alexandra Cannon in Pearsall, Texas, on March 29, 2015.