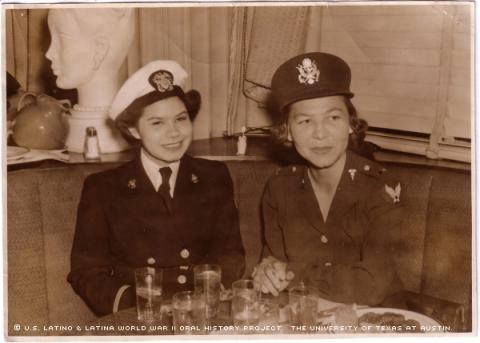 In late December, 1943, the United States had been fighting in World War II for more than two years, but for one Tucson nurse, the war was a brand new experience: that's when Carmen Romero, now Phillips, joined the Army.

Recruiters visiting St. Mary's Hospital School of Nursing College in Tucson, where Phillips was attending school, were looking for nurses.

"They asked if we would be interested in joining the military, so I said yes and they signed me up," Phillips said.

In the next few years, Carmen Burruel Romero would remove casts filled with maggots off men. She would also move to Corpus Christi where she met and married the man that would father her four children.

Phillips was animated and had remarkable clarity of her memories as a 22-year-old during the war. At the time of her interview, she was about to turn 83, but was energetic and appeared to relish the chance to reminiscence about her past.

Phillips was born on Jan. 19, 1921, in Silverbell, Ariz. Her father, Jesus Romero, was a rancher, and her mother, Brigida Romero, was a housewife. She had two brothers and six sisters, and their parents taught the children both Spanish and English. Both of her brothers had also joined the military during the war.

After graduating from high school, she decided to go to nursing school partly because it was so cheap. She worked hard for 12-hour shifts which included class and working in the hospital. When she graduated, she also became a Red Cross nurse and still has the badge to this day.

After graduating from nursing school, Phillips needed to have a physical before she could enlist.

"We had to give a urine test. Do you know what I had to urinate in?" Phillips said. "A ketchup bottle. Of course the men, they had it okay. But you had to be real careful not to get your hand all full of urine."

Phillips was assigned to the Station Hospital at the Santa Ana Army Air Base in Santa Ana, Calif. During her years at nursing school, she maintained a grade point average of 96.4 and discovered her favorite aspect of nursing was in the operating room. Her reputation preceded her and a special request for her service was made when she arrived in California.

Phillips went through basic training that involved a two-hour hike to show fitness and endurance and gas-mask training. When she was working in the hospital, she had to have an excuse to miss basic training.

"I was the only one that was in the operating room because at the time we had corps men that would scrub in and help with the surgeons at the operating table. But a RN had to be a circulating nurse and do all the record-keeping and make sure that everything was ready, and that's what I did."

At the base in Santa Ana, Phillips mostly attended to men wounded in the Pacific.

"When they got back to the States, we had to do the final repair, especially if they had fractures with casts. In those days, those were hard casts. Some of them smelled bad, some of them not so bad. You take that cast off, and you would see a lot of maggots. They would be full of maggots. But those wounds, those maggots had cleaned the wound because they ate all the blood and pus."

In August 1944, Phillips left Santa Ana and reported for duty at Stockton Field, in Stockton, Calif. While she was being transferred, the war in France had escalated and was reaching a climax. She was in Stockton when Germany surrendered in May of 1945. When Japan surrendered in August of 1945; she left the military on Nov. 1, 1945. Before she was discharged, she was promoted to first lieutenant.

In the summer of 1945 before the war ended, Phillips married for the first time, a marriage that would last less than a year. After her discharge, she worked at St. Mary's Hospital in Tucson.

In 1946, one of her flight surgeons asked her to come work with him at a clinic and hospital in Corpus Christi. She accepted the job and took a train to Texas. She worked for the surgeon for one year before accepting a job at Memorial Hospital.

Phillips married Charles Alexander Phillips, in January of 1947. Mr. Phillips was a bombardier aboard B-24 bombers in the Pacific during the war. Charles and his brother, Israel Phillips, lived in Corpus Christi after the war.

"I met him first, Israel. Both of them had a business not far from the hospital. It was like a little grocery store and they had cigarettes and pop and stuff like that. And so us nurses from Memorial Hospital would walk across the street and go get our stuff there and that's how come I met [Charles]."

Charles and Carmen had a son and three daughters. Mr. Phillips died in 1991. Phillips continued to work throughout her life.

"For some reason I was always in charge of whatever I was doing, and it was usually an operating room," she said. "I got to train a lot of the new nurses and help them. If we wanted them to do a good job, I had to teach them."

Almost 58 years after the end of World War II, Phillips still uses her medical training with members of her family.

"[My sister] always would want me to go with her to her doctors' appointments so I could tell her what they were saying and what she should do," she said.

Phillips moved back to Tucson in 1961.

Phillips is still connected with her country. After Sept. 11, 2001, Phillips called the Red Cross to offer her services in New York. The Red Cross representative on the telephone, learning of her age, said it was unlikely they could ask so much of an older person. She replied that she would do whatever was needed - filing, office work. She was not called back. In recounting the story, Phillips laughed that, at the age of 83, she still feels that she has the strength to take on the world.