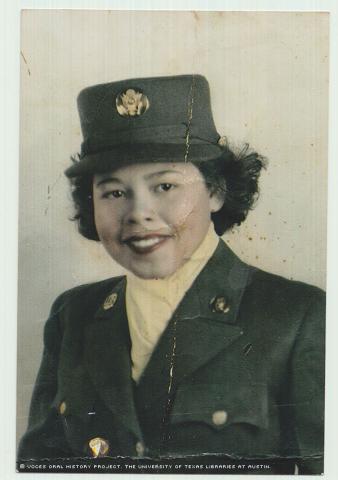 While World War II was underway thousands of miles away, Carmen García Rosado, a young schoolteacher who lived in Caguas, Puerto Rico, saw in a local newspaper that the U.S. Army wanted to recruit Puerto Rican women to support the war effort.

Her curiosity piqued by the prospect of joining the military, García-Rosado made a decision that would change her life. She went on to be one of the 200 Puerto Rican women who traveled to the United States to serve with the Women Army Corps (WAC).

She remembered the moment when she asked her mother's thoughts about enlisting. The response was simply "No daughter of mine will ever join the Army." By that time, though, it was too late: García-Rosado had already been accepted and given her uniform.

García-Rosado and the other Puerto Rican women who enlisted were taken to Fort Oglethorpe, Georgia, where basic training began on Oct. 15, 1944. She was assigned to Company 6, 2nd Battalion, 21st Regiment of the WACs.

After an initial appointment as a nurse, García-Rosado became a mail clerk at the New York Port of Embarkation. As part of her duties, she read letters in English and Spanish to search for any military secrets, which she would turn in to her superiors. She recalls that hundreds of letters passed over her desk, many of them covered in dirt, mud and blood.

While working in the United States, García-Rosado witnessed several instances of prejudice toward women and people of Puerto Rican heritage. In the camps, for example, she found that women were segregated across ethnic background. With regard to gender, she felt that male soldiers acted as though the women were there to entertain them.

In spite of those instances, García-Rosado has good memories of her time serving in the WAC. She says the military took good care of her squad when it came to down time, giving them tickets to see plays, operas, and once even sending the entire group to take a vacation at Vassar College, in Poughkeepsie, New York.

After finishing her service and going back to Puerto Rico on Jan. 6, 1946, Pfc. García-Rosado became aware of the unfair treatment that female veterans faced on their return to civilian life. She decided to become an activist and politician in the island.

García-Rosado created many of the first groups that fought for the rights of Puerto Rican women veterans. One of the first issues she wanted to address was the idea that veterans are only those who serve on the frontlines, omitting those who perform clerical jobs. García-Rosado believes that all who served their country are veterans and deserve to be treated that way.

Looking to bring her activism to the political realm, in 1980 García-Rosado ran for the Senate of Puerto Rico. She lost to Velda González – who incidentally became the first woman ever elected to that legislative chamber.

From her activist years, García-Rosado remembers the many letters she sent to Puerto Rican leaders and to President Bill Clinton, asking them to acknowledge the status of Puerto Rican women veterans and to expedite the distribution of undelivered benefits checks.

Years later, she would get the opportunity to address the president of the United States directly. García-Rosado met Clinton at a ceremony for the Women in Military Service for America Memorial. There, she was told by an organizer that she would be allowed to enter only after the president had greeted the servicemen.

García-Rosado remembers telling the organizer that as a World War II veteran from Puerto Rico, she had the same right to meet the president as the men. After this exchange, she was finally allowed to take her seat and greet Clinton.

García-Rosado was born on Oct. 29, 1926, in Humacao, Puerto Rico; she was one of nine children of Jesús García, a sugar plantation foreman, and María Rosado. Because of her father's work, the family moved around often during García Rosado's childhood, with stints in Cuba, the Dominican Republic, and the Puerto Rican islands of Vieques and Culebra.

In 2006, García-Rosado published a book about the experiences of Puerto Rican military women during World War II, a task she considers to be her greatest tribute to the women she served with. The book started off as a compilation of the letters she sent to Puerto Rico during that time, along with some poems.

However, after García-Rosado told a fellow veteran about the manuscript, the word spread and she started receiving letters with the stories of other Puerto Rican women veterans. In the end, the volume became an anthology of the participation of Boricua women in the war efforts.

García-Rosado looks back on the book as the best way to let the world know about the legacy of Puerto Rican women and their role in the war.

"It was a great honor for us to serve the American nation," García-Rosado wrote in Spanish in a 2015 e-mail to Voces.