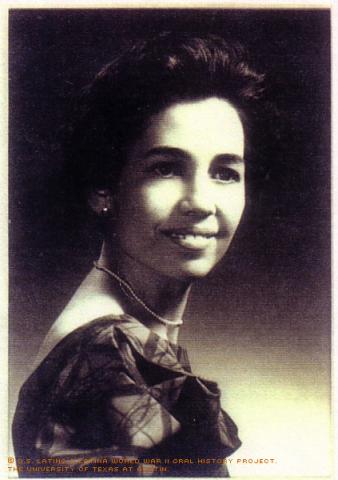 Guadalupe recalls the time the owner of a museum learned of his many medals earned in combat, and told him "I'll make a hero out of you."

Guadalupe quickly answered, "I am a hero, I have been for years, and I don't tell anybody."

Ortega smiles and nods her head in agreement.

Many would say she’s a hero in her own right.

Born in Mexico, she moved to Texas with her family when she was only 3 years old. She was born into a family with 13 brothers and sisters. They all fled Mexico during the Mexican Revolution and settled in San Antonio. Though Ortega was young when she left Mexico, she still remembers the sadness she felt when she left her native country.

"I cried and cried," she said, "I just missed my grandparents so much."

Her family eventually grew tired of Texas and moved to Saginaw, Mich., where she remembers a pleasant childhood and loving family.

"We used to play hide and seek," she said with a nostalgic smile. "We used to love that game."

Many nights her mother would sit on the family's front porch and watch the children play hide and seek until nightfall, she recalls.

"He was a good pitcher," she said. "They won a lot of games because of him."

During WWII, Guadalupe was drafted into the Army, and Ortega soon gave birth to their first child, Yvonne, before Guadalupe went overseas.

"She looked just like Lupe," said Ortega, displaying an old photograph of her daughter. "And you'll notice she's on a horse."

Ortega attributes her daughter's fondness of horses to Guadalupe, who spent time in the cavalry during the war before serving in the China-Burma-India Theater.

After her husband returned from WWII, the couple soon had two more children: sons David and Joseph.

Joseph was conceived after a doctor told the couple Ortega wouldn’t be able to bear any more children.

"I had to prove them wrong," she said when discussing the pregnancy.

"It wasn't a challenge," she said of her time as a professor. She added in written comments after her interview that her students were teachers who were earning their master's degrees, so they were eager to learn.

"Now teaching kids to read, that was the challenge," she said.

Since 1977, Ortega has worked on the migrant program in the Bay City Schools. She wrote, developed, implemented and supervised migrant programs, including a consortium of bilingual programs for three local school districts.

She was elected president in 1949 of the American Legion Post 500 Auxiliary, where she served until 1951. During her term, she managed to solidify the auxiliary by encouraging the members to carry out the goals and objectives on which the auxiliary stands.

Her accomplishments earned her respect within the Legion, and she was asked to serve on state and national levels.

Since her retirement, Ortega continues to volunteer as a reading teacher at Jesse Rouse Elementary School in the "HOST" Reading Program in Saginaw.

While Ortega has earned honors and recognition for her many contributions to her community, veterans and their families, she says it hasn't been at the expense of her relationships and roles as a dedicated wife, mother, grandmother and friend. She adds she holds those personal relationships dear to her heart, and says they’ll only continue to grow during the "golden years" of her life.

Mrs. Ortega was interviewed in Saginaw, Michigan, on October 20, 2002, by Gloria Monita.